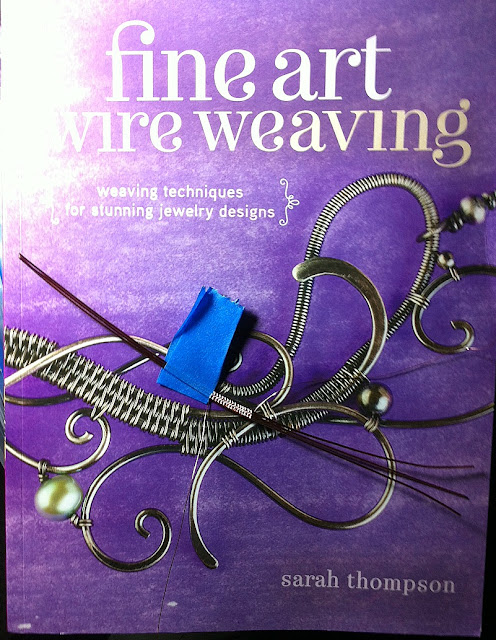 Picked up Sarah Thompson's book last night from my mailbox. It was shipped from Amazon.ca Tuesday morning and got here in the day's mail south of the middle of nowhere Thursday afternoon. Not bad!

I'm severely dyslexic when it comes to understanding written directions and even photographs, in particular when it involves continuous sequential movements like the various wire weaves (or oil painting, say. From a practical standpoint, I still don't know what an underpainting is and how one uses it to get to a finished painting. It's a completely baffling mystery to me.) Given that, I became happier and happier that I subscribed to her video at Craftsy, and watched it straight through first to get an overview, because I would've become very frustrated if I only had the book -- again, that's just me. The biggest difference between her video and the multitude of others on YouTube is that most of them that I've seen assume you already know the basics (but you don't know that when you start watching them), and Sarah anticipates every question as it occurs to you as a first-time viewer.

Now I'm working my way through the video again -- slowly -- from the beginning. Well, this first weave at any rate. Yikes.

I'm using 18 gauge for the base wires (three) and 28 gauge to do the wrapping. For what it's worth, about 2 feet of wrapping wire does maybe an inch of this modified soumak weave I'm starting with.

Not the most exciting picture in the world, but... it's a start, and shows just under an inch of weave. 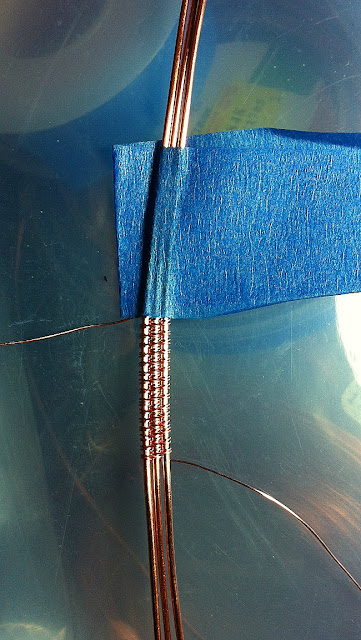 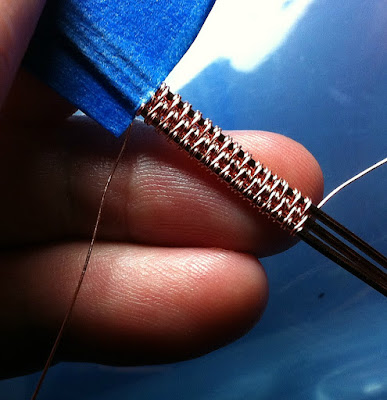 One of the things Sarah advises in the video to use are kumihomo bobbins to wrap the longer lengths of wire. Not having bobbins, I tried wrapping wire around a pill bottle and taping it with painter's tape, but it quickly fell apart. The pill bottles are actually kind of heavy. Then the wire got too kinked so I had to cut it. I think it will work for now, but need to use more tape. Don't cheap out: it's not expensive.

I have no idea what I'm actually going to do with this other than wrap a pendant, but I want to add some hammered twiddled paddles at the ends, so I did cut the base wires extra-long and will use this as a play piece.

Thanks again to Pearl at Beading Gem for turning me (and a lot of other people) onto Sarah's video and book.