The 1st Annual Bridal Bonanza at the Quality Hotel in Woodstock last night was a hoot: 33 vendors and no idea how many attendees, but the room was packed over the entire three hours. I got super lucky and ended up with a fairyland of a backdrop for my table thanks to the wedding venue people on the other side of the backdrop. Braindead me didn't get their name or business card, so if they see this... Thanks!

Rene's cakes (with cake toppers by moi) were a hit. It will be interesting to see what kind of business we derive from this show. I hope I have a little rush on peacock feather earrings at Saturday's market -- funny what captures people's attention. It seemed to me that it was mostly the over-30s brides and the MoBs and MoGs that expressed interest in my jewellery. I sent all queries for the big blingy necklaces to my pal Jess in Kitchener, who owns The Bead Boutique.
We have to pay more attention to the length of those skirts next time! And I have to remember to take pix once everything is completely set up on the tables. Obviously, I went for a more spare look this time, compared to my market setup. Don't know how this would go over there, but it sure was easy to take down. Took a solid hour to set up. It's much harder to figure out where just a few things go than a lot.

I sure hope I have a good day tomorrow. Supposed to snow/rain overnight... here we go again, another six months of praying for above zero temps on a Friday night/Saturday morning and a sunny Saturday to put people in a good mood. No more loading the truck up the night before for another six months, either.

Off to make more jewellery.

Just heard that there were 47 registered brides and 125 attendees.
Posted by Barbara at 11:30 No comments:

This will be an interesting experience for me to see how my wedding jewellery is received, along with the cake jewellery I provide to Let's Eat Cake at the Quality Hotel & Suites Bridal Show, Thursday 27 October, 2011, located in Woodstock, Ontario, exit 232 off the 401. Hope to see you there! Lots of great door prizes, too!

On other fronts, I'm off to Toronto tomorrow to buy more feathers, such a hoot to play with, and other fun stuff. See my new goodies this Thursday evening at the bridal show and/or every Saturday morning at the farmer's market. If you miss me at either of those venues, you can find a broad selection of my jewellery at Rekindled: Fine Things on Consignment beside RBC on Dundas Street just west of Museum Square, as well as a huge selection of pure silver leaf and flower pendants and turquoise jewellery in the gift shop at the new Woodstock Art Gallery, across the street from the Museum.

I am taking orders for Christmas and other gift-giving occasions, and I have a good selection of well-priced necklaces and earrings that would be perfect for Secret Santa exchanges at work or among friends and family, stocking stuffers, as well as to have on hand for emergency gifts -- or for yourself. Who better knows precisely what you want and what colour, right?

Note that I can often do simple repairs while you shop at the market -- but please come early! -- or email me first at bemacdougall@gmail.com in case I need to bring a particular finding (restringing will have to be done at home). So long as the repair doesn't require soldering, which is something I don't do, I can replace clasps and earwires, etc., and I carry a small selection of men's and ladies' sterling silver chains, as well as fine natural and black Greek leather cording. If you've lost a favourite earring, don't toss the remaining one: let me turn that one into a necklace pendant and make a new coordinating pair of earrings for you.

See you Thursday at the Bridal Show or any Saturday at the market!
Posted by Barbara at 17:34 1 comment:

Yes, the Grand River Bead Society bead show on the weekend (Oct 15-16) was a total hoot. I will be signing up for two tables next year, and I hope have my back against a wall. I met so many interesting people I never otherwise would have encountered. It was so great to not have to pack everything up on Saturday night, just walk away, and except for the fact I had to rush home and type for several hours and then get up at 5:30 a.m. and type some more before I drove back to Guelph, it was nice to just walk in at 9:30, flip the cover off and be ready to go for the 10 a.m. opening. 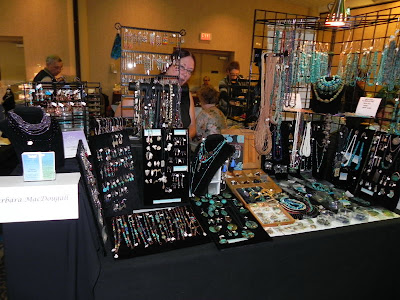 Here are a silver and turquoise earrings and bracelet set and some of the copper squiggle earrings that I was playing with for the show. I made a pile just of earwires, too, but nobody wanted to pay for them: they're expensive little suckers to make in materials and time. But they do look so nice when they're all made up. At least I think so. 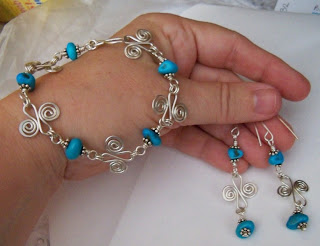 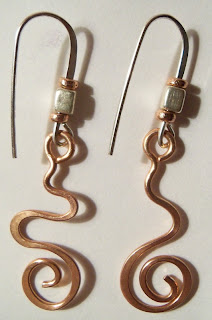 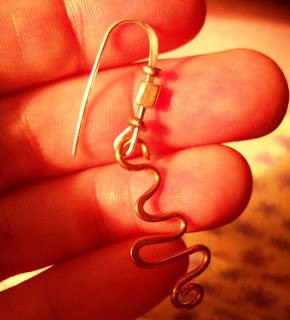 Here are some of the goodies I bought at the show. Normally I don't buy dyed stones, but these druzies and raw ruby fuschite (not dyed) are so purty. Got these and some stunning feathers from The Bead Boutique in Kitchener. The carved yellow face beads are probably dyed serpentine, not yellow jade as labelled, but still very cool. The skull beads are from Iguana Beads in Cambridge. 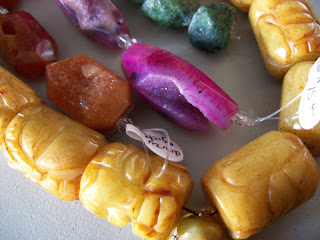 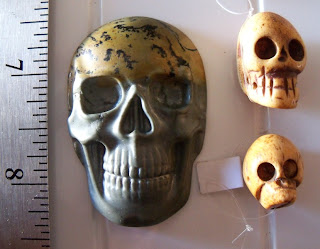 I didn't spend everything, and have the start of my stash to I hope go to the Toronto Oasis Bead Show coming up on the 21st-23rd and/or the Toronto Bead Society Show, 5-6 November, but definitely for sure I'll be going to the London Gem & Mineral Show, 19-20 November.

Time for my second cup of coffee and get to work. Bonus was finding ginkgo biloba trees lining the parking lot at the hotel in Guelph, so I will be starting a batch of PMC silver leaves today. 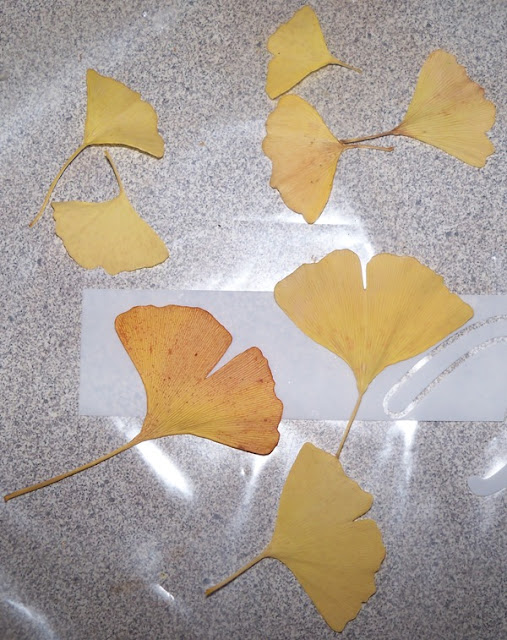 Less equals more according to Graham Hill. Yes, I have absolutely experienced what he's talking about while camping, whether it's in my truck in the mountains or on a friend's couch, and curtailing my acquisitive packrattiness during the three years spent living in Italy, knowing when I left I would be limited to two checked bags at whatever weight, so why buy???

But, oh, boy, are there ever some scary implications in his talk on Ted.com. Like, for example, how un-American he is, preaching the gospel of Stop Shopping. How dare he? Heresy!

I have read about what a growth industry the storage business is and anyone anywhere can see evidence of it: you can't drive anywhere in any large city or small village without seeing at least one storage facility, with new ones popping up every day. I remember reading a few years ago how people in their McMansions could easily have 5 or more garage-size storage units to hold the stuff they still couldn't find room for in those ginormous excrescences they called "homes": they just couldn't stop buying. (And that's after they'd filled their own garages to the rafters.)

Have you ever been in a position of needing to rent storage, even for a few months? Holy crap, is it ever expensive! I'd bet dollars to donuts what most people would want to store in the end the Goodwill would probably toss in a dumpster, and yet they're willing to add thousands upon thousands of dollars of storage charges on top of the "value" of the items they're storing instead of having a lawn sale and suck up making 10 cents on the dollar (if they're lucky). And how many people in the end end up walking away from their storage units because truly the truth is "out of sight, out of mind". Look at the classifieds: storage unit auctions abound -- there's another growth industry for ya -- and off these items all go, back into circulation, at 10 cents or less on the dollar.

Gawd... I feel positively monastic with my 20 or 30... okay, 40+ boxes of kitchen crap, books, art, art supplies and now jewellery-making crap. I've written before about my project to get rid of one single box or garbage bag of stuff per week. That's slowed waaaaay down. But now it's pyromania season -- I mean fall -- so a lot of my collection of useless paper things (like bills from 15+ years ago -- nope, I really don't think RevCan gives a rat's patootie about those) are finally being used as fire starter. I'm still left with what to do about my books, though. Those expensive art books...? You know, the ones I haven't even looked at for at least three years, if not since several days after I bought them over the past 10 to 20 years? The ones that I paid full price for new and I could buy now at 10% of the list price used on Amazon.ca?

I did discover a trick which I've heard other people telling me they do now, too -- put a book on an online wish list. They're like me: they come back a month or six months later to put another must-have book on the wish list and see the other ones sitting there patiently waiting to be ordered -- and wonder why they're there in the first place.

I have a lot of boxes just like the one Hill brought on stage in his Ted talk. Ones that were far easier and faster to move for the past 10-15 years w/o spending time and going through untold emotional angst looking through their contents. Gaaaah........ I don't need post-its with 15-year-old telephone numbers on them, dammit!

I have a long way to go and many boxes to dispose of, but yes, I would love to get back down into one room again, or better yet an RV's "one room" so I can get rid of needing two possessions: a vehicle AND a room.

I got to Graham Hill's post via here (and here for the original post) but in the meantime have lost the origin of the post by an artist who is struggling with this very dilemma of trying to downsize yet feeling compelled to create more art -- which really and truly is the worst stuff in the world to create, own, accumulate, display, store and/or move.

But then that ties into breaking the buying stuff habit versus buying experience or consumables, assuming experience and creation are equitable. In every recession, do you know what the primary growth industry is? Jewellery, and to a lesser degree accessories. Jewellery, as I've discovered, is such a visceral item to possess I don't think people are going to stop buying it against all logic or state of bank account any time soon. Art -- anything made by hand for that matter -- is equally a visceral occupation that feeds other needs, if not a creator's very essence (or need to eat).

Meanwhile, back in the real world, if I'm lucky today there will be no rush typing coming in so I can go make more jewellery to feed viscera; it's the market tomorrow, plus there are two shows to get ready for next weekend.
Posted by Barbara at 10:50 No comments: