Yes, it's confirmed -- I WILL be at The Gem Expo at the Hyatt Regency Hotel on King Street in Toronto March 17th, 18th and 19th. Hope to see you all there. It's on the final weekend of March break when everyone -- well, a lot of you -- will be back from holidays, Sign up for any class(es) and get free admission for all three days.

In addition to all the usual goodies at my table, I'll be offering two classes: 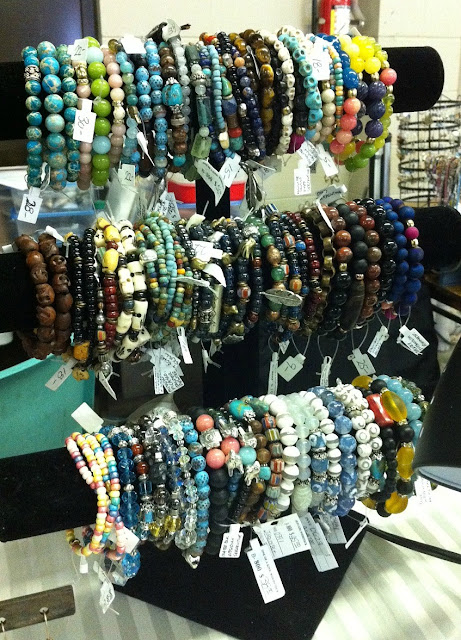 The Totally Addicting Stretch Stacker/Mala Bracelets class is intended for complete and utter beginners, but it'll still be an interesting and informative class for anyone of any age who wants to learn a new technique. I'll supply beads and Stretch Magic in the kit and there will be plenty of beads to buy, but participants are encouraged to bring their own beads and findings -- and there's a whole ballroom full of vendors with beautiful beads, too.

Class size will be limited to 8 participants, so sign up early. 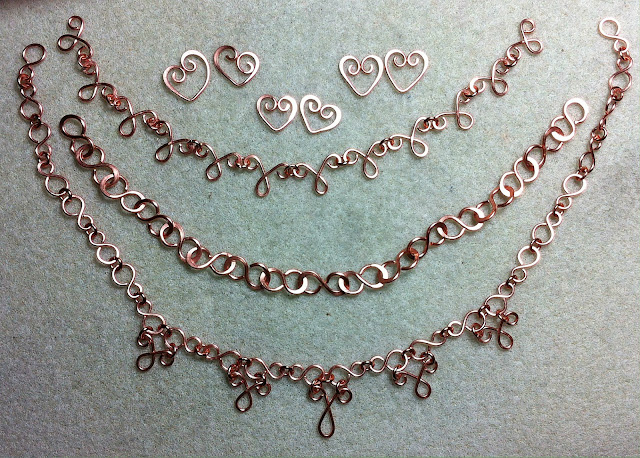 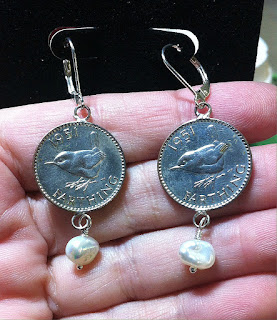 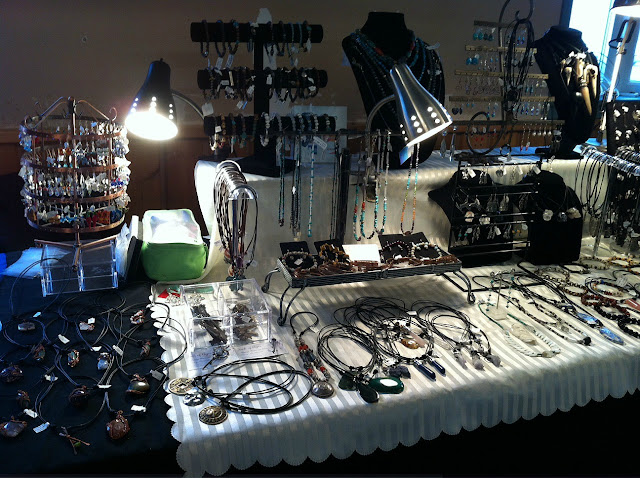 My Wire Tips & Tricks class is for not-so-beginners to intermediate students. You've already taken some classes, maybe you're new to wire or looking to improve your techniques to attain a more professional, finished look to your jewellery, or maybe you're ready to turn your hobby into a business and need to develop more efficient production skills.

We'll walk through an overview of tools, different wire and findings properties: features to look for, what's good for what, what to avoid, where to buy, the pleasures and pitfalls of buying online, how to buy wholesale, etc. If you're curious about what's involved in selling at craft shows or store/consignment venues, we can talk about that, as well.

Because you're a not-so-beginner, I want to move fast through the yackety-yack in order to get to the making part of the class.

I've been an artist most of my life, and have made and sold wire and semi-precious jewellery for about ten years, Since I'm a production person by nature and because time is money, I figure out the easiest way to make something and then I get really fast at it.

I'll show you techniques I've developed so you can quickly and consistently make your own ear wires, dangles and other findings, wire-wrapped beads for earrings and chains, and we'll cover some very basic wire-weaving tips and tricks.

Please feel free to bring a project with you for either a quick critique or help if you're stuck.

Class size will be limited to 8 participants, so sign up early.

I'll let you know here and on my Facebook page when the classes are posted. Subscribe to The Gem Expo to get discount coupons, vendor list and info on the other classes being offered.

If you have further questions please ask below, or email me.

In the meantime, see you every Saturday morning at the Woodstock Farmers Market. Thanks for stopping by!
Posted by Barbara at 15:08 No comments:

2016 was a miserably painful year on so many, many fronts. Good riddance, I say.

My Christmas Tree table at the market this year: 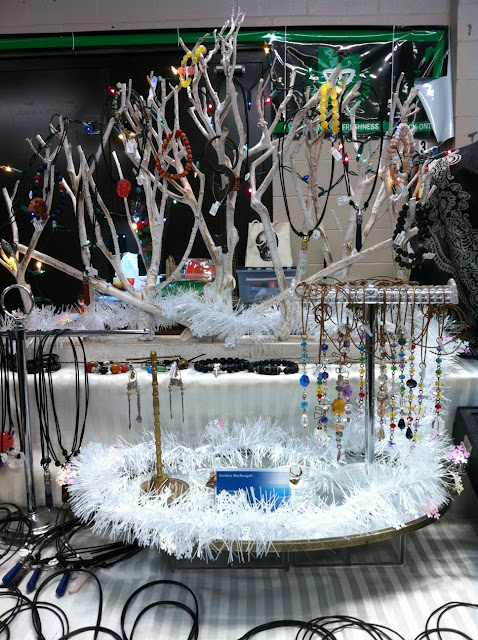 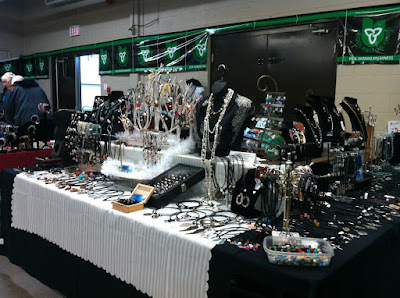 My new invention is the 2Daycation wherein I leave home around noon on one day and leave Toronto the next day noonish, to get back late afternoon or early evening. Gone only 24 hours or so, but straddling two days, it feels satisfyingly substantial.

Tuesday after Christmas I checked into the HI-Toronto Hostel on Church Street  (yep, with three roomies, bunk beds, etc.) and proceeded to have myself a very, very nice time.

The great thing about this hostel is that it's walking distance to just about everything I wanted to do. I met up with Ruth and Christopher, for whom I was bringing lots of fetishes, a few blocks away at the St. Lawrence Market, we did some oohing and aahing over all the bead and crystal goodies, and then Ruth and I went to The Jason George for dinner. It was so freakin' GOOD and very relaxing. Knowing I didn't have to spend three hours driving home in the dark afterwards like I'd normally do, a 1/2 pint of Alexander Keith's was involved. 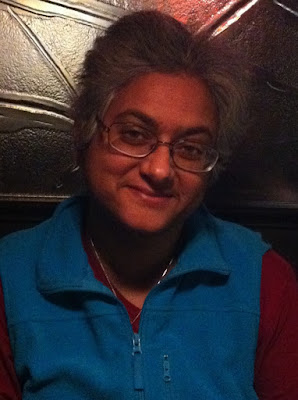 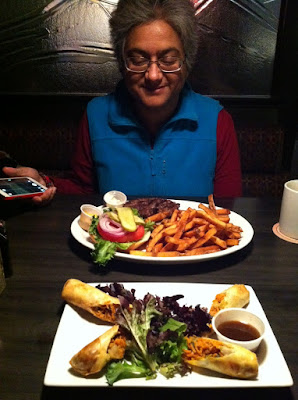 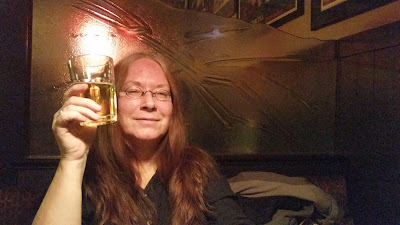 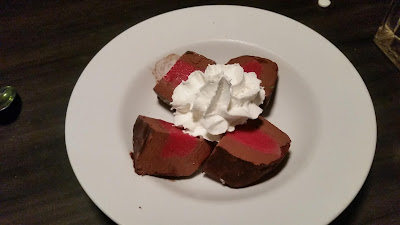 Wednesday morning, I hung out at Pusateri's in Sak's for an hour or two drinking cafe latte and watching all the people speedwalking through the underground tunnels to work. There's something so mesmerising about watching people go to work when you don't have to. Stocked up on goodies (vanilla bean paste, in particular) at Pusateri's, then on beads and findings when the wholesaler opened at 10:00, then met Ruth at Little India on Queen West where we had another fantastic meal, and then headed home -- in daylight.

I highly, highly recommend the 2Daycation concept to anyone who is going more than a little nutso with whatever pressures they're under but with little time to vacate.

In the interest of escaping further, even for a few hours, one morning after New Year's Lianne the Vintage Lady and I had breakfast at Burger Barn on the Six Nations Reserve south of Brantford. Fabulous, fabulous food, all locally sourced, and super high octane coffee. 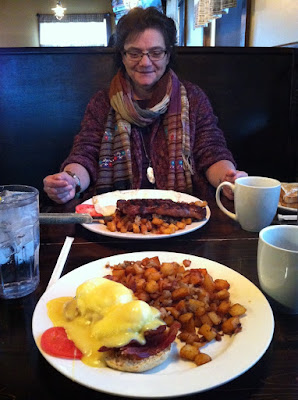 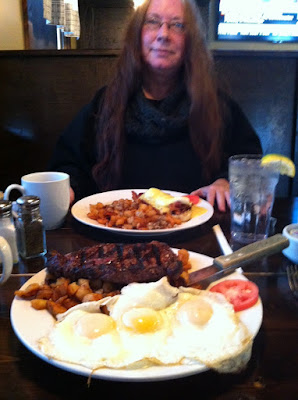 Yesterday -- because 2017 has hereby been declared The Year of Being Nice to Me -- I decided that the grey hair had to go and tried out Allanti, a school here in Woodstock that I had never heard of before. Such a beautifully renovated old barn, and they do everything from basic hair cuts and colours to mysterious spa thingies. Allow (a lot of) extra time for your appointment because these are students, after all, but they really do a fine job and for very, very reasonable rates. 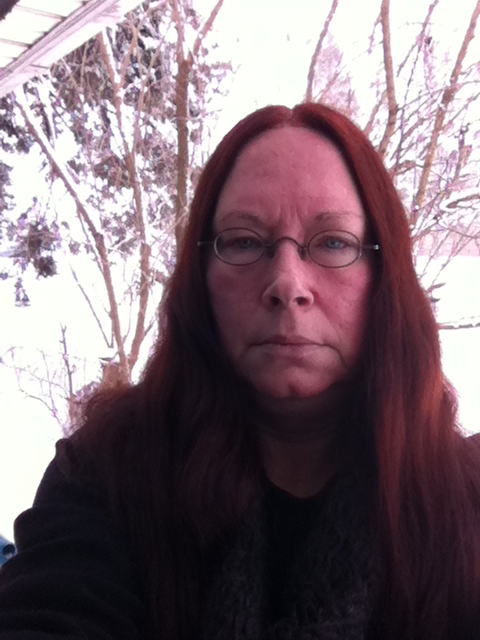 My face was kinda frozen here, it being outside and all, but I'm doing a happy dance inside.

Happy New Year to everyone, and pleasepleaseplease let 2017 be a much better, if not absolutely great year for us all. I promise to make more and post more, too.
Posted by Barbara at 20:50 No comments: