I got back last night from doing the three-day Gem Expo in Toronto put on by Blue Sapphire Beads. This was my first time doing a show in Toronto. To be honest, I was more than a little nervous. Even though I've done the Grand River Bead Society fall show for the past four years, that started out as a one-day event, and then moved to two days, and is held in a much smaller city -- Toronto is a completely different market.

I talked with many people at the show who told me they were beginners at jewellery-making so this is kinda sorta directed towards them. Not only do I sell turquoise, I also make jewellery, and believe me, I'm still learning, too. The great surprise to me when doing any show is seeing it all laid out -- shows are the only time I ever see my turquoise as between shows it all lives in bins.

Since it's physically gruelling to do any type of trade show -- you would not believe how much stuff you have to haul with you -- oftentimes including all your tables and chairs -- I made the very smart decision to go to Toronto on Thursday to hit the wholesalers early in the day, park at the Hyatt by 3:30 p.m. to get off the street during rush hour, then offload and set up on Thursday evening, rather than get up Friday morning early-early, leave by 5:00 a.m., do battle with rush hour traffic and getting to the Hyatt by 7:00 a.m. if I was lucky to start setting up, then do the show from 11:00 a.m. to 9:00 p.m. and then stagger back to my hotel. That would be brutal. Long story short, I booked a hotel for three nights instead of two, choosing not to drive home each night which is what I normally do when I'm doing the Grand River Bead Society show in Guelph. That's a much easier 45-minute drive on back country roads. Makes a big difference.

Choice of a Hotel
I spent considerable time looking at -- aka dithering over -- hotels and rates. The Hyatt on King, where the show was, was way too expensive for me. I had no idea how well or poorly I would do at the show, so I had to keep my out-of-pocket expenses as low as possible, while at the same time trying to remain within a short walk of the show venue. I found several hotels within my price range in the area, but either they were booked up for the time I wanted or only had large and expensive rooms available. Party of one? You betcha. I even looked at youth hostels. I had no idea you can rent private rooms! But they were booked up and I imagine the noise would be something else. I remembered staying in a hotel about 20 years ago very close to Union Station, so I did a search, rebooted the ol' memory cells and finally recalled the Strathcona. I also remembered in my innocence running up a $75 local phone tab chatting with friends I couldn't meet with during the two days I was in Toronto that time because in those days switchboard-assisted calls were billed at about $1 per minute.

I got my parking spot at the Hyatt, was able to unload my truck early but still had to wait until 7 to set up. I walked over to the Strathcona on York Street and checked in. Yes, the room was a little small. In fact, it was smaller than the freight elevator I had just used at the Hyatt to bring my boxes and bins up to the ballroom floor.


On the website, we're warned that these tiny rooms are located right next to the elevator shaft. But all I ever heard was the very occasional ding when an elevator would arrive on my floor. I slept fine. I also discovered after I had booked that there is a senior discount -- not that I am in any way, shape or form a senior just yet... but sometimes seniorhood is extended backward -- downward? -- to 50, 55, 60... I asked -- and received -- a discount.

Setting up
Meanwhile, back at the Hyatt, since I would be manning (personing?) the tables by myself the whole time, I elected to not use all three tables. This was also a new setup for me -- I'd always had either a single table or two in a line, not a corner setup. In the end, it worked out beautifully for a couple of reasons.


Pub Grub
I've lived in Toronto for years and know the city well, but you know what? I decided to stick to the Strath Pub, walk there, grab a beer and something to eat after setting up and then go to bed. I know, I know. I'm boring. Tough. I get there and find out the kitchen has just closed. The waitress told me there were many restaurants still open in the vicinity, but I know those types of places -- food's fine, but ginormous portions and long waits. Uh uh, no thanks. Do you have anything at all to eat? Chips maybe? No, sorry. I guess I looked pretty sad. The wonderful waitress grabbed some crackers from the kitchen which kept me going with my beer.

The show
Friday morning I got to the show early to lay out the beads on the table, tweak my display and finish pricing new items. 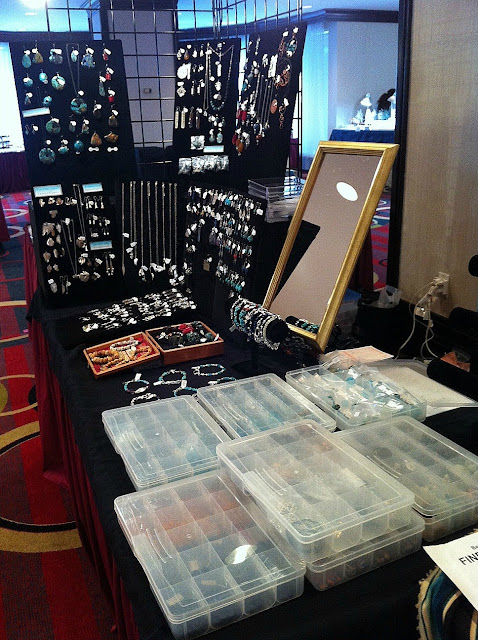 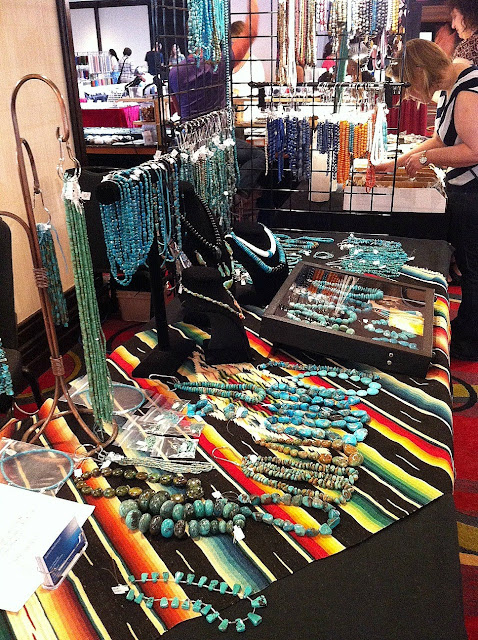 I can't even begin to talk about the show. It was so much fun. I met so many, many interesting people I've lost track. I barely got a chance to talk to any of the vendors, and only had time to buy a few things. Although every time I sold something and there was a lull, I'd dash down the aisle and add something to my stash at Najib. There were people there from all over the world, both vendors and attendees. Zulekha and Salim did such a great job organising the event. I'm so happy they convinced me to do this show.

Guess who I saw?
I can't resist including this picture. I saw him only on Saturday morning because it took me that long to realise that the escalators went straight to the ballroom floor and I didn't need to hang around waiting for the elevator.


Walking to the venue on Sunday morning
This red brick and copper-roofed building is representative of what much of downtown Toronto used to look like up until the '80s. That darker grey building on the extreme right of the photo is the Strath.


Restaurant Row begins here, extending a few blocks west and primarily on the south side of King Street. It reminded me of Saint-Michel in Paris, criss-crossed with streets where every little building holds a different restaurant, sometimes two or three different ones up and downstairs and barkers stand outside on the street waving a menu in your face guaranteeing you a discount meal. Here, though, polite people stand and wait for you to approach and express an interest. But it's so pretty at night with coloured lights strung everywhere and just about every resto has a terrace with tables.

Halfway down the block and across the street is the Hyatt. On the right across the intersection, which I cropped out of the photo, is where TIFF hangs its hat -- that's the Toronto International Film Festival (also somewhere along here the picture of Johnny Depp was taken). For those of you who know this area well, note that I cleverly angled this picture to eliminate the solid mass of condos choking the view of the sky to the east, the south and the west.

North of TIFF headquarters is typical infill style, middish-19th century buildings at sidewalk level (mostly razed but occasionally cleverly incorporated), but then behind them... 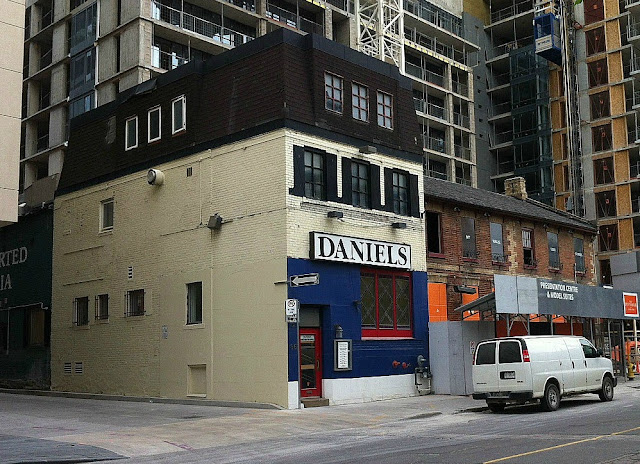 ...see what I mean by choking the sky? 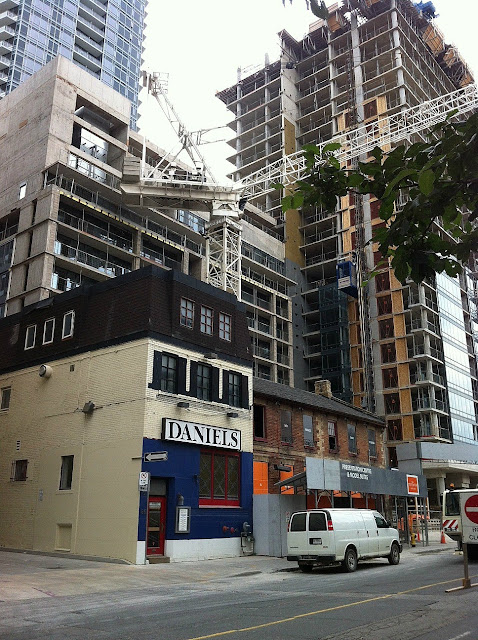 Last day of the show and the Sunday morning breakfast of champions... I was given this extra bacon. I love bacon. No, I did not eat it all. 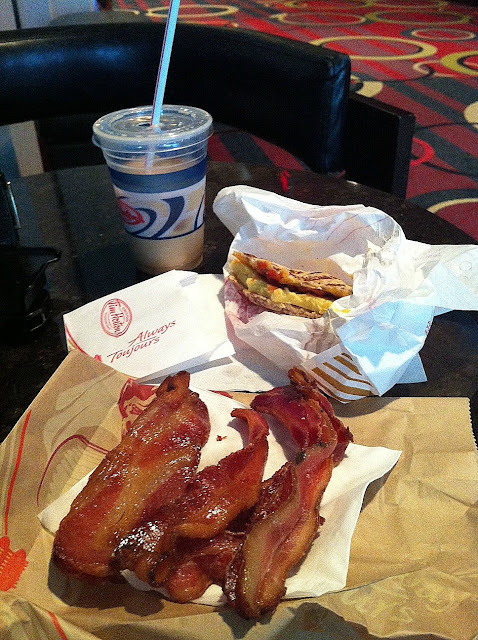 Show recap
Friday and Saturday were both pretty slow sales days for me and kind of sparse attendance (and yeah, I was a little worried about making my expenses but I thought I did okay), but it left plenty of time to talk at length with the people who did come. I met many who were just starting out making jewellery and, because it was so slow Friday and wire work is close to my heart, I gave an impromptu wire-wrapping lesson to one of my customers. Ruth asked if there was anything she could do to repay me, that she had bought a 3-day pass and was coming back Sunday. I didn't want to take anything, but she insisted, so I asked if she could bring me some food, as it's really, really difficult to get away from the table. Sure enough, Sunday afternoon at the height of the crowds and crazy busy, she showed up with a fat turkey sub, a coconut drink and tube of Pringles.

Then, to top it off, she stayed on and helped me pack up and load up the truck. Thank you, Ruth! I owe you big time.

On the way home from Toronto, after driving through the northern edge of a monsoon that soaked Paris, I just missed photographing the fattest double rainbow I have ever seen. Had to drive a bit further on before I could safely pull over and only one rainbow remained. I'm choosing to interpret this as a harbinger of great things to come. 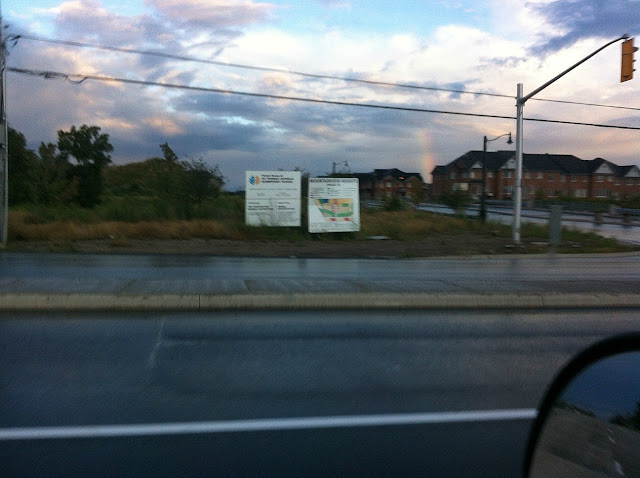 It was a great, great weekend, and in the next couple of days I'll post pictures of the goodies I bought for my table and to make jewellery -- as well as the Tibetan turquoise that arrived in the mail shortly after I pulled out of here. Oh, yeah -- in addition to all the turquoise people bought, I sold a couple of the new necklace and bracelet designs I've posted in the last two weeks and several pairs of earrings! If you are looking for anything in particular, either via email/online sales or upcoming shows (GRBS Show & Sale in Guelph in October or The Gem Expo in November), please let me know as I will be acquiring turquoise, fetishes, recycled glass and chevron beads over the next few months.

If you have any questions about the mechanics of doing a show, please ask. Oh -- I must add here -- my Square credit card-taking gizmo which I've now had for three weeks worked perfectly. I cannot recommend it highly enough. It's perfect for small "itinerant/intermittent" businesses like mine.