Deciding What Works, What Doesn't -- and WHY...

Developing a discerning and analytical eye is a skill that is learned over time -- a long time -- of doing. It is most assuredly NOT the same as being hyper-critical and beating oneself up on failing the first time you try something. I'm better than I was, but still not very good at balancing self-criticism and self-critique. Critiquism?

What I did learn years ago was to put my drawings away as I did them and come back to them six months or a year later -- NOT to sit in immediate judgement and trash them all, and then beat myself up for being a total failure. When viewed from a distance of time, a lot of them weren't that bad (and a few still aren't that bad), and -- most importantly -- by that point I could see with my own eyes the progress I'd made and understand the breakthroughs.

My method of learning a new skill (in fact, working at anything for that matter) is to make variations of one thing over and over, in a sense a moving meditation where I turn off my conscious, decision-making brain, tune out the endless critical noises that burble up telling me I'm a loser and to STOP right now -- and just let my fingers move. This method comes from 40+ years of life drawing when I produced over 4,000 drawings a year. Those drawings were not "art" per se (although many did end up on gallery walls and sold) and most ended up as landfill.

Making drawings then and jewellery now is no different than putting in years of piano scales or guitar riffs for a musician, planting seeds and learning the hard way to recognise which are the weeds (whoops, blew that season) for a gardener, the years of running before a marathon, or even achieving a full driver's licence -- in other words, practice, practice, practice and paying endless often heartbreaking dues.

With my jewellery, after working for several hours, I lay out all the pieces, photograph them and begin sorting and rearranging to see what I can see: patterns, positive/negative space, what jumps out at me that's good, bad or indifferent, the "meh" factor being just as valuable as my favourite feeling: "Wowee zowie, lookee what I did!"

But what if time is of the essence? What if you don't have the luxury of six months or a year to sit on your jewellery or your art? It has to go in a store, the market, gallery or show, posted online -- or, lucky you, to the customer -- today. What do you do if this is your livelihood, or close to it? You have to master a new skill as quickly as possible, at the same time tweaking to make it your own, and start producing saleable work of impeccable craftsmanship. No fake humble allowed: this is business.

So whaddaya do? You find a friend you trust, who understands the difference between critiquing and criticising, understands that what you're NOT looking for is kneejerk, meaningless praise (Oooh, that's beautiful!) or equally meaningless dislike (Eww, I don't like that, it's not my style at all). Tell me why you think it's beautiful, or what I could do to make it your style. And more importantly, this friend understands the jewellery-making process itself. My pal Ruth (who keeps me calm and sane and fed at the Gem Expo) puts on her Ruthless hat and pulls no punches telling me what her gut sees that I'm too close to figure out on my own.


Yesterday, I finally broke the non-stop transcription/Netflix binge I'd been lost in since New Year's and got back to bending wire (see here and here for the new skill I've been learning). I'm guessing I spent two hours to make these, including time to look carefully at what I'd just done to see if I could replicate elements I liked. I'm presenting them here in the order I made them with my own and Ruth's after-the-fact comments:

1. First one of the afternoon's production. Not bad. Still with the pointless twiddles on the right side of the stone. What I noticed much later was that here I'd inadvertently/unconsciously covered up the wire goes into the bead on top and coming out at the bottom. After looking at all the finished pendants, I realised that this is definitely something that always needs to happen, and most of the other pendants became fails to me because of that. But... there are often mitigating good things going on so we won't be too hasty.

As well, while the goal of this wire weaving technique is to keep the pair of wires together all the time, that swoop that's just barely happening around the bottom is something that could be exploited. Because I've trained as a primarily 2D artist most of my life, it's been a surprisingly difficult battle to move into true 3D.


2. Total fail. Definitely for the scrap heap. Blech. Move on. BUT... there was still a lesson here: I really liked the vine-y thing that started to happen on the back.


3. This is a strange one. The front here looks okaaaaay and I like the vine-y wrap effect I was trying for that I'd done in the previous pendant, except that it's barely visible. Of course, as per my usual, it was the back that came out really nicely. According to Ruth:

imho, this does not work because of competition.

The stone is really amazing.  The wirework is an interesting work of art on its own.
Put the two together, and the stone and the wire are competing for attention.

My suggestion is to separate these items and showcase each of them.
The stone in a very plain setting that does not draw attention away from the stone; and the wire around a uniformly coloured, dark stone so the wire is what pops.

I like the shape of the wire here.  A plant, and a treble clef, and ...?  You haven't lost your talent in a month away from wire!

I'll try to take this one apart and save the wrap.

4. Ruth wrote, "This one says ELEGANT to me." Me, I like the swirls and I'm more consciously using the vine wrapping at the bottom to hide the wire going into the bottom of the bead. The top where the wire comes out? Big boring meh. And again -- see the sequence of small swirls developing on the right side? I tried replicating that in a more controlled way in the next pendant.


5. This one I really like. It's ticking almost all of my personal boxes: asymmetry, top and bottom of bead covered, and a truly beautiful bead that hasn't been overshadowed by the wire -- and from a purely design POV, the stone is oriented the right way vis-a-vis the yellow bits and the wire -- which was a total accident. Originally, I'd wanted the bead to go sideways. Ruth said, "This one is the most whimsical and says, "PEACOCK" to me."


And some people look at this and think it's easy. Gaaaaaaaaaaaaaack. Nope. And oh, do my hands hurt!

Yesterday, there was a hint of sun casting a watery shadow but chilly and damp enough out to make sitting inside making the above pendants (and, okay, watching Netflix) -- stupendous weather for January 31st given that this time last year we were battling -40C temperatures and unrelenting snow. 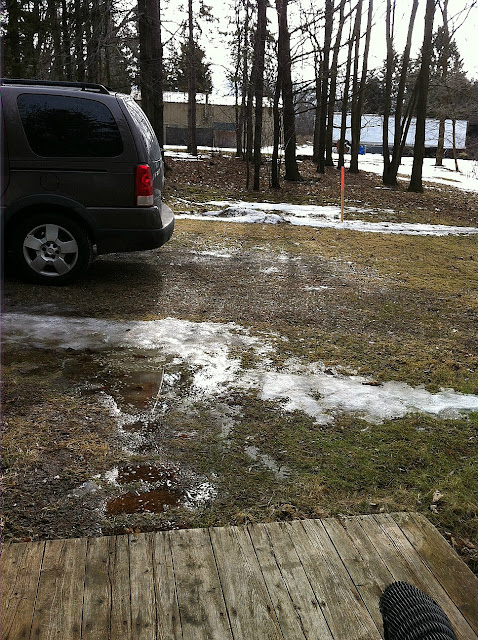 Now today, it's sunny out, above freezing, and we're heading for a crazy 10C/50F on Wednesday. To my pals down south, phhhhhtttt. I just hope I can ignore the siren call of warm sun long enough to get back to churning out more pendants.

FYI, these will all be for sale at the Woodstock Farmers Market and online here. Prices on my wire weaving range from $18 to $35 and up depending on complexity and the stones I use and include an adjustable leather cord. Shipping and handling are extra. Send me an email for availability and your location so I can calculate exact shipping cost.


These would make a great Valentine's gift!!