Wowee zowie, 4 feet by 2.5 feet is a hard table layout to do. Anyone who knows me or who has taken a look at my various show setup pictures knows I have a ton of stuff and usually fill 1, 2 or even 3 tables plus grids. But half a table? It is to laugh.

Pick yourself up off the floor and I'll show you how I did it.

The trick is to go UP and use grids, shelves, risers...

4:45 p.m. Friday night. The Embassy Room at Bingeman's. A few vendors have begun setting up. Several people got stuck in Friday rush hour traffic getting out of Toronto. I've been here since 4:00, saying hi and catching up with people I haven't seen in a while. Time to get to work. 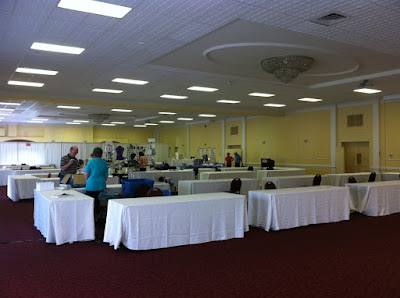 The van has been unloaded, the bed risers have been put under the table (see how the table looks like it's levitating?), grids and lights set up and trays, shelves and risers roughly placed. 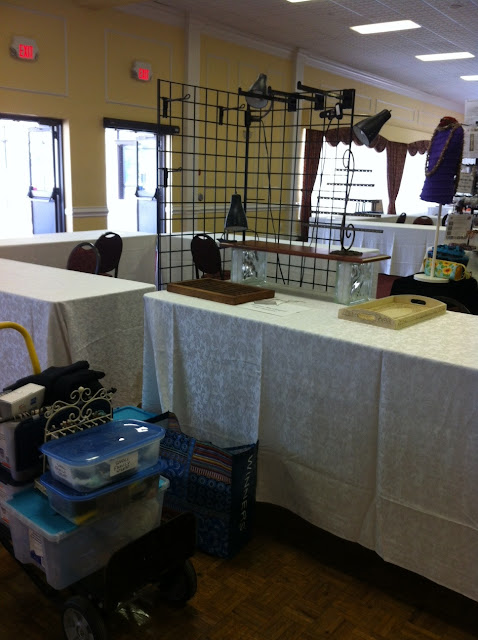 Back view of the table showing the placement of clamp lamps, and small (invaluable) folding table which will have a black cloth draped over it. Roxann Blazetich-Ozols put a dressmaking Judy on her back table, draping it with her large ducette/lucetting x 2 fibre necklaces. It's a neat trick to expand your table footprint -- to go back behind if you can't go up or to the side. 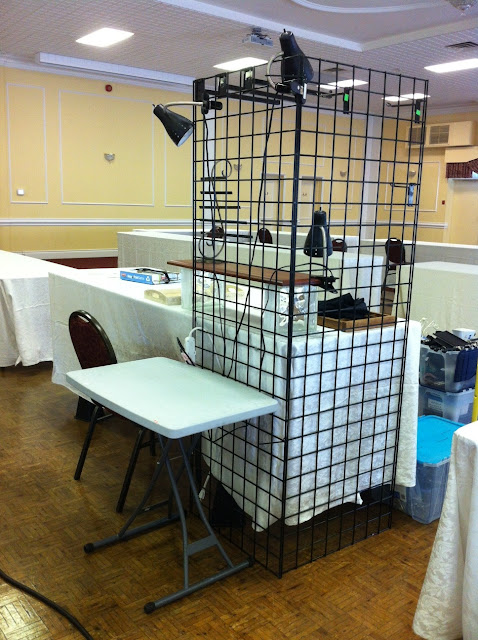 5:18 p.m. Friday night. Starting to fill the type tray and thinking about what will go where... 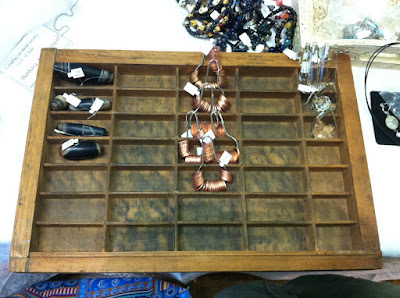 Ick, this is the worst part of setting up... I truly have no idea where it will all go. To the left of the type tray are small angled dollar store metal frames, that come with glass which I take out. They are great for tilting bins and trays up at the back so contents are more easily seen. 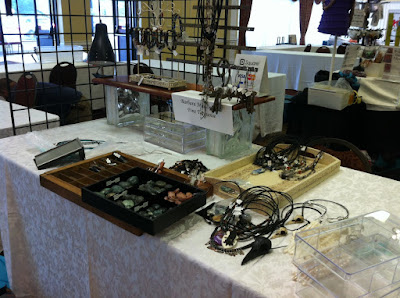 6:00 p.m. Friday night. People seem to be quite happy poking through my bins, so I have stacked as many as three on top of each other. After a few moments, I'll ask people if they're looking for anything in particular, and if I sense more than a passing interest I'll come around to show them where everything is hiding. 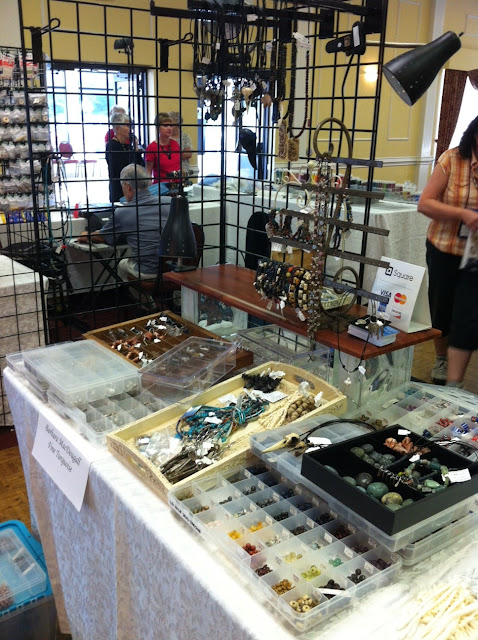 6:42 p.m. Friday night. Done setting up for the night. Still no turquoise out and no way was I going to get all my curtain rods full of beads in strings on the rack as shown, i.e. facing into and over the table. Bah... I'll worry about that tomorrow. 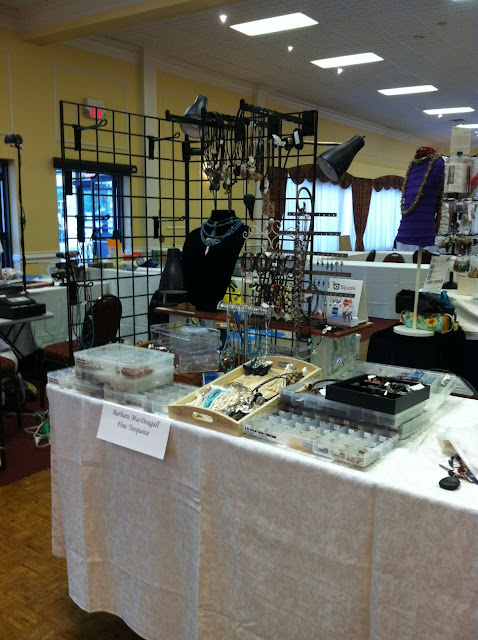 9:35 a.m. Saturday morning. I wasn't happy with draping the necklaces around the neck of the bust, so I pinned them cascading down the front. 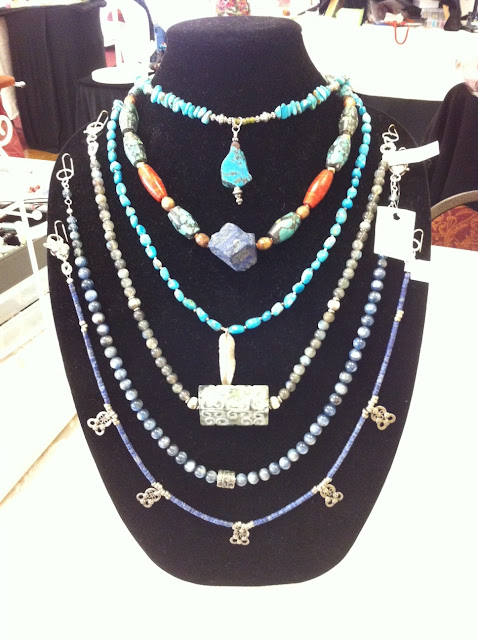 9:35 a.m. Saturday, 25 minutes to showtime. I stole my computer monitor setup of glass bricks and board for this show and, I like it so much I'm now using it exactly as shown at the Saturday market. I think it looks very nice. 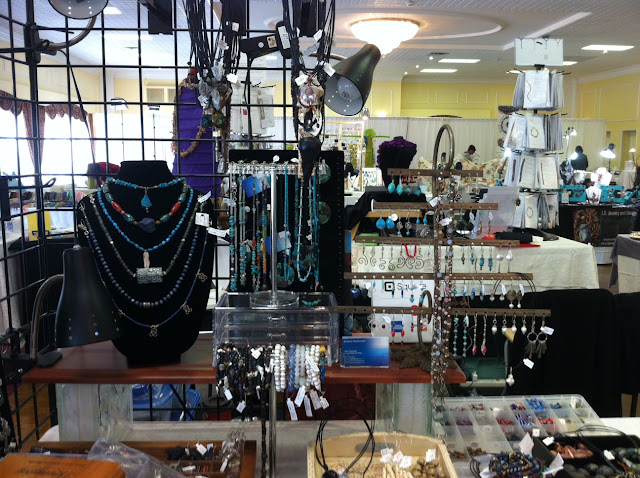 It's hard to see in the picture, but the T-bar to the right of the bust in the centre is sitting up on a clear plastic set of three drawers. I put several strings of beads in each drawer and opened them slightly so people would be encouraged to look further.

I've already been asked by several people where I got the glass bricks (used, cement cleaned off, from our local Door Store, aka Habitat for Humanity Re-Store). Figgers -- they're not interested in the beads or jewellery; they want the bricks. Sometimes I really do get the sense that I'm in the wrong business.

You can't see in these pictures, but there is about three feet of space between each table. By the time I arrived just after 8:00 a.m. my neighbour to the left had put bags of findings on hooks on her grid facing into that space. This is great -- we can use that space! I ended up putting all my bead strings that are on curtain rods on the hooks on the other side of the grid that faced into the space, too -- this meant I could put out a ton more beads and people had room to get up close, nose to bead, to see them.

Since Sunday mid-afternoon was considerably slower than Saturday (okay, it was dead), I got lots more weaving done on this pendant. I took advantage of the fact that Debbie Benninger from I.D. Jewelry and Design was also a vendor, and she gave me some great feedback (and tips that I've never read anywhere) on this, my first wire-weaving that I would actually show anyone.

That bloopy bit to the top right of the bead was supposed to be a leaf, but once I wrapped it around the pendant, I decided it looked more like a cobra. 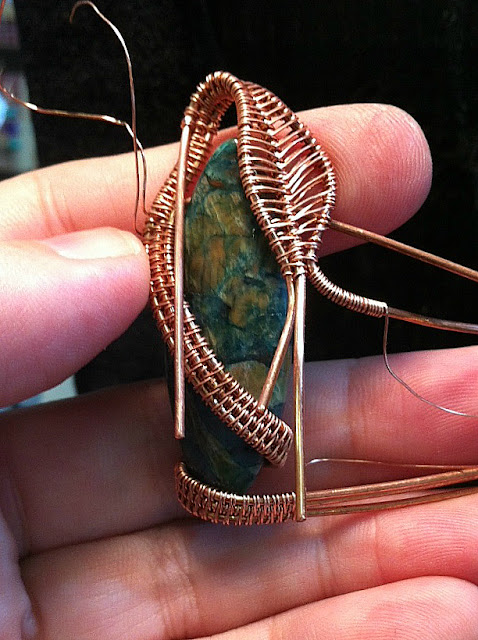 By 4:30 p.m. on Sunday my pendant was looking like this. (Here it is a week later, and I'm still trying to get around to hammering the "tongues" which I'll wrap behind to secure the wire to the pendant.) That little plain wire tail bit in the centre I'll also be unwrapping and hammering flat as it looks really stupid all by itself. I shouldn't have cut the other wires short before thinking it through a bit more. Y'know, they warn us about this all the time. Do I listen? Rhetorical question.

The beauty of this technique is the woven wires are so very flexible. I can change my mind in mid-design, unwrap things, straighten bits out and nudge them in another direction, and the swoops and curves that are possible are enchanting... you canNOT screw this up! My favourite type of activity. 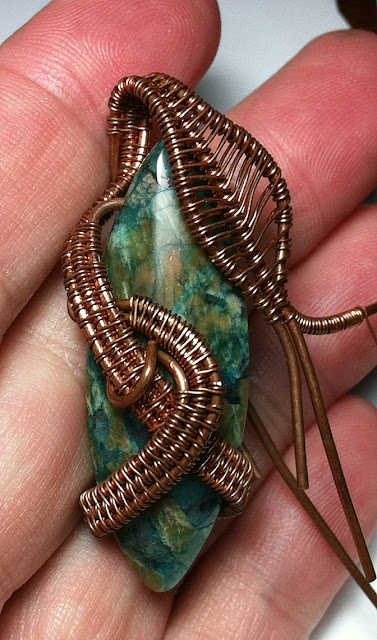 5:05 p.m. Sunday. The show is over for another year, and we're all madly packing up. 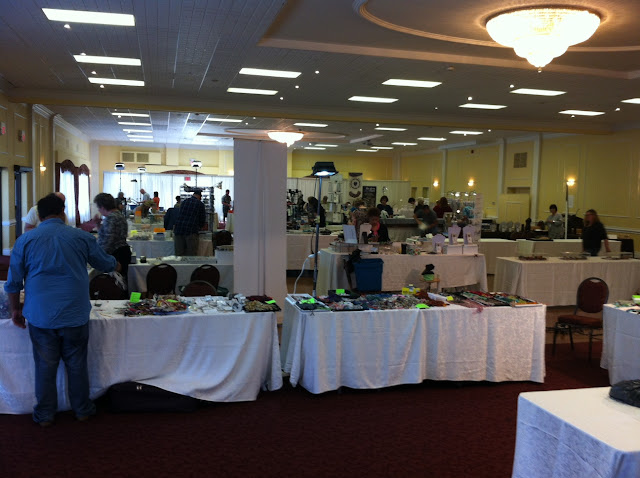 The organisers are already talking about renting the same venue for next year. The natural light that poured into the room all day was fabulous.

Reminder, unless there's a ginormous ice storm or some other pesky weather phenomenon, I will be at The Gem Expo at the Hyatt Regency, King Street, Toronto, November 20th-22nd. Hope to see you there!