On Saturday, I got Debbie Benninger's book from my mailbox on the way to the market. Wheeeeee... so many mysteries solved! Not so wheeee is that my first effort kinda sucks. But the things I was able to learn... Things like:
... how much wire this eats up so buy by the ounce, pound if you can;
... always cut extra wire;
... do NOT let it kink;
... don't hammer too hard where wires cross or they will break.

For my first piece, I wasn't intending to make a heart. I cut two pieces of wire and started wrapping about one third in. I just wanted to play, to see what changing weaves would do, which is why the heart that the two pieces of wire became is so... scruffy. There's no other word. The silver-coloured wire is 20 gauge tinned copper. Next time, I would use 18 gauge. Even doubled up on the right side, it's very flimsy and bendy. Those mean little curls at the base of the bail are a result of cutting the wire pieces too short. 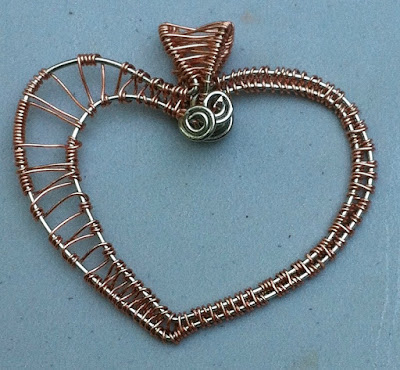 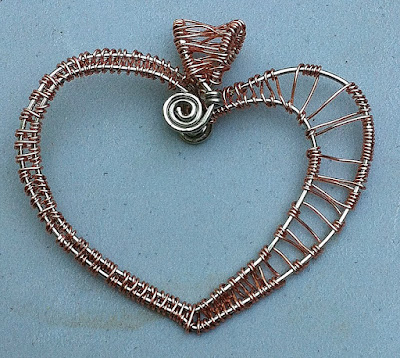 While I was making the above, I took a little detour and made this. What I really, really like to do is hammer and I love the way that flat hammered bit wrapping around the neck of the bail looks. 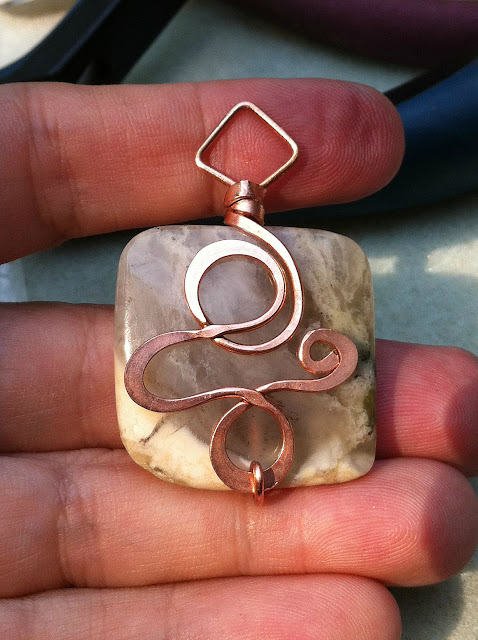 Then in between both of the above, I worked on this -- ideas come so fast, I have to stop what I'm doing and start another so I don't forget my idea. Kind of a mish-mash of techniques and still learning how to do wraps -- but this time, keeping them tight together, as Debbie reminds in the book. 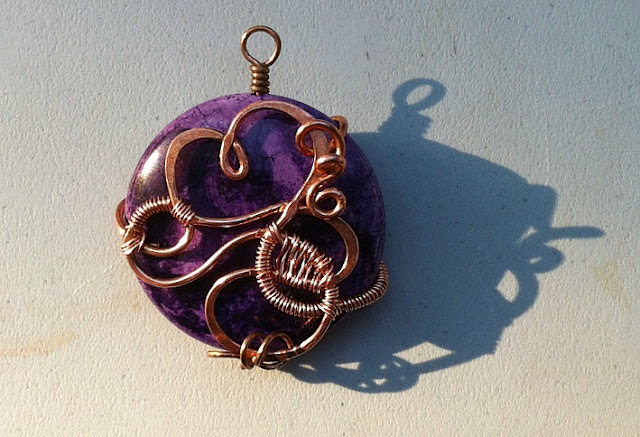 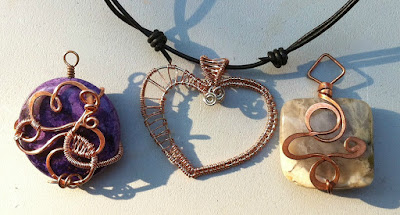 Hydro, in its infinite wisdom, decided to cut the power out along the highway from 8 a.m. to 6:00 p.m. without telling us, and so I was forced to work outside. No biggie, it was something I had been thinking about for a long time, and now had no choice. It was LOVELY. Cool breeze all day, no humidity, no baking in the heat like all my pals were doing north of me in town. Hah! 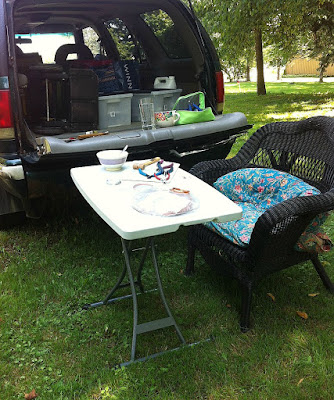 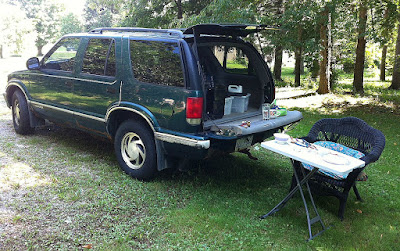 On the wildlife front, Friday morning after the rain I happened to wander over by the sliding door and saw what I thought was a bit of stick or leaf. That's funny, because there was no wind. I looked closer and the stick had legs.

Picture taken through the screen from inside my house: 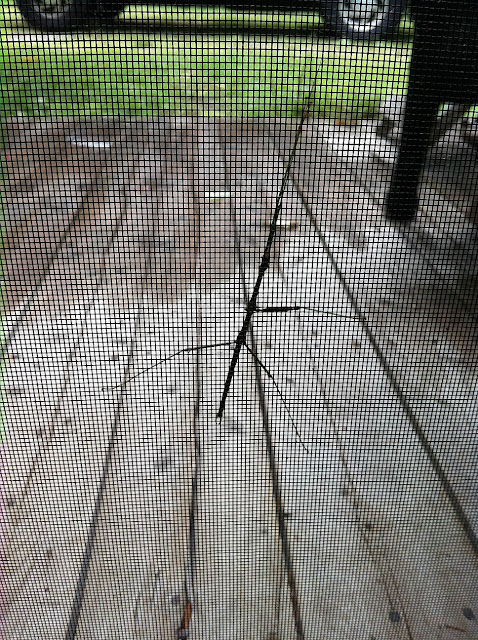 Picture taken from outside: 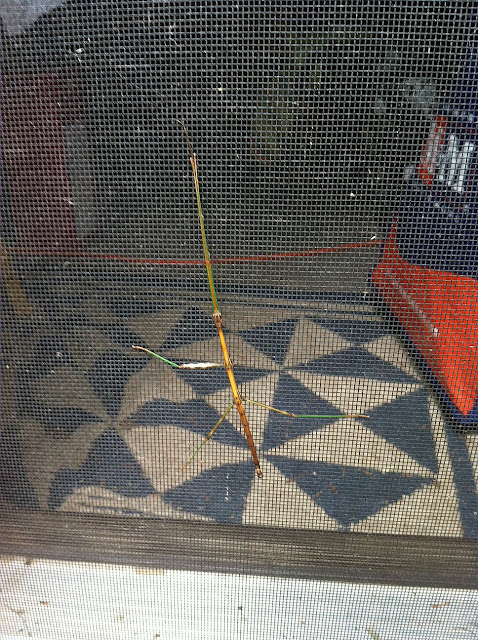 Yesterday morning around 8:00 I was outside wandering around and my eye was caught by bright sky blue moving on my windshield. I could not capture the blue -- it was a more sky blue than the sticker on the windshield, point being I have never ever seen a butterfly this colour here in southern Ontario (nor a stick insect like the above, either).

It looked like it had maybe just hatched and was drying its wings in the sunlight. 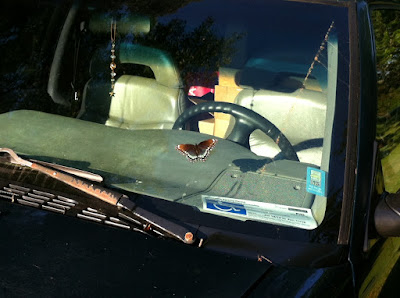 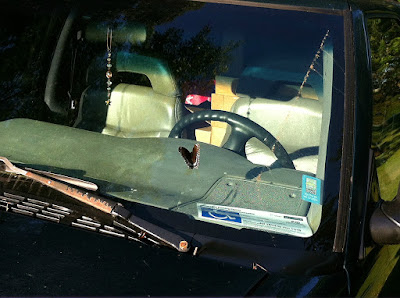 Where it's white along the outer edge of the wing span was an intense light blue. 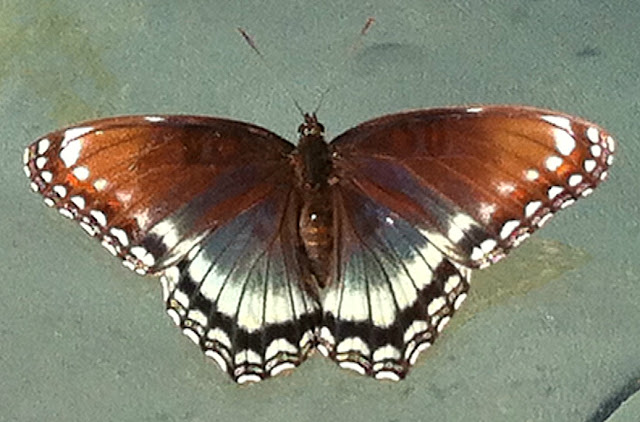 I've seen a hummingbird twice here in the past couple of days. Even while I'm sitting on the deck reading he'll come by to check out my hanging baskets. I've only ever seen a real hummingbird once before in my life.

Thanks for looking and, if you're ever in the area, bring your beads and come and play in my outdoor studio!

Great work! Love the purple one!

Thanks, Geeske. More to come. I've run out of so many of my necklaces and pendants -- which I guess is a good problem to have, right? I hope you're having a great summer and doing lots of shows. I am waiting impatiently for my new van so that I can try to get in a few markets before they close next month, and also sign up for some winter shows. This being stuck at home is awful. It's been two months now.