I've noticed Mombird hanging around these past two days and, figuring she might want to build another nest in the same location on top of the lamp, I pushed the used one down this afternoon. What a wonder of construction. Three distinctly separate parts -- four, if you count the loose straw, twigs and grasses she used to fill up and level the space she built on between the lamp and the wall -- each on examination with a specific function. How on earth did she know to do this??? Amazing. I don't think I'll use the term "bird brain" ever again -- except as a compliment. Plus, she built the nest itself in a few hours over two days, letting each part dry. That would obviously explain why she left the nest for a few days after she'd finished building it. The weather was very damp and cold then.

This is the nest upside down. That solid brown bit is the inner, mostly mud construction. Can't figure out if that hole in the middle served a function. Drainage if for some reason rain got into the nest? Or damage done by those three gallumping teenagers tromping on each other for food over the last day or two before they finally flew the coop? 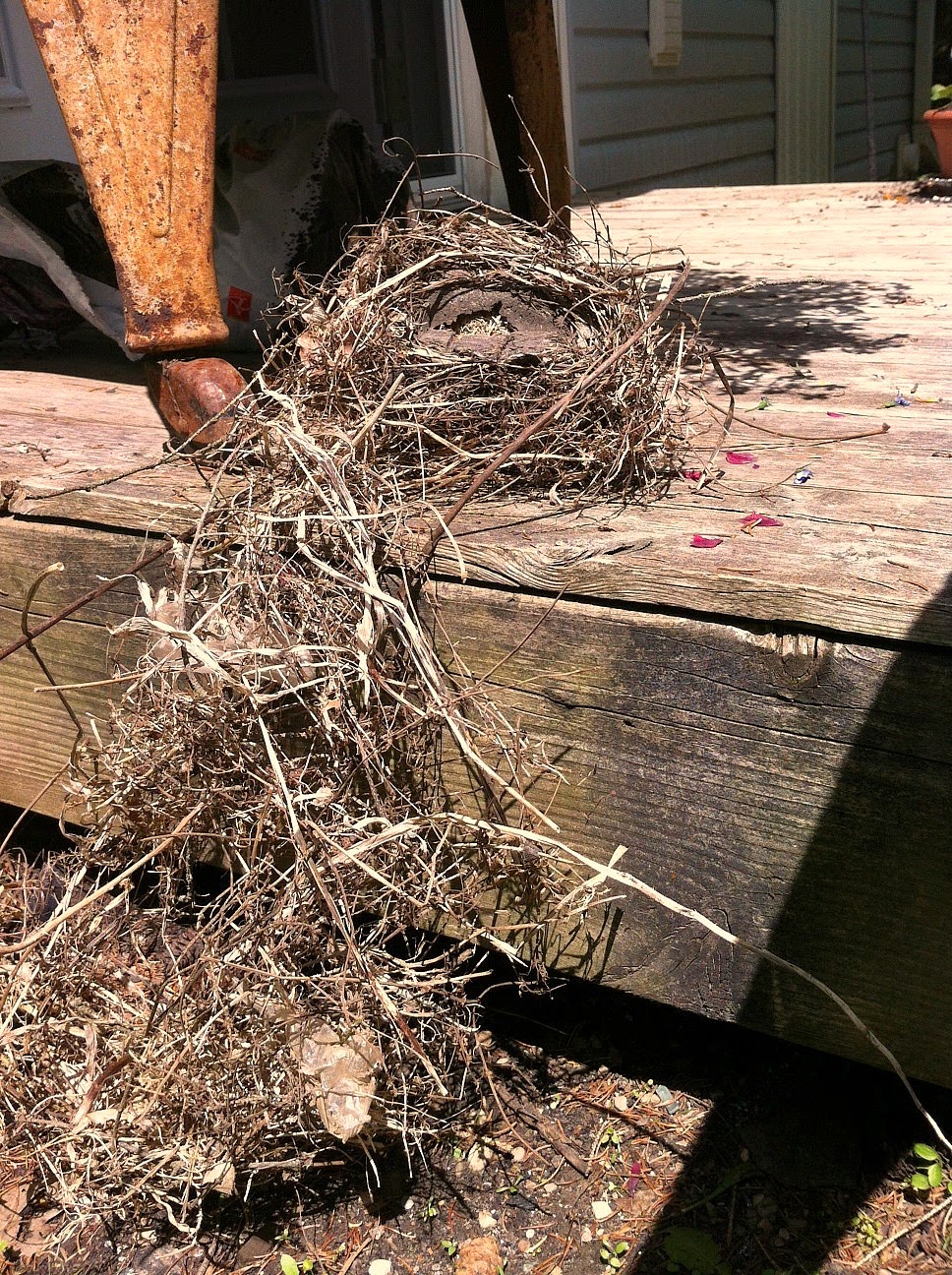 The flat part was where the nest was against the wall, otherwise it's just about perfectly round. There's the rough outer nest, then the mostly mud part about 3/8" thick, then the incredibly soft dry grass liner. There are three little poops there, clearly in little sacs, just like the various articles said she would do. I guess she wasn't going to encourage them to stay any longer by taking those away. The nest was otherwise immaculate. Not even a single shard of blue egg was left. 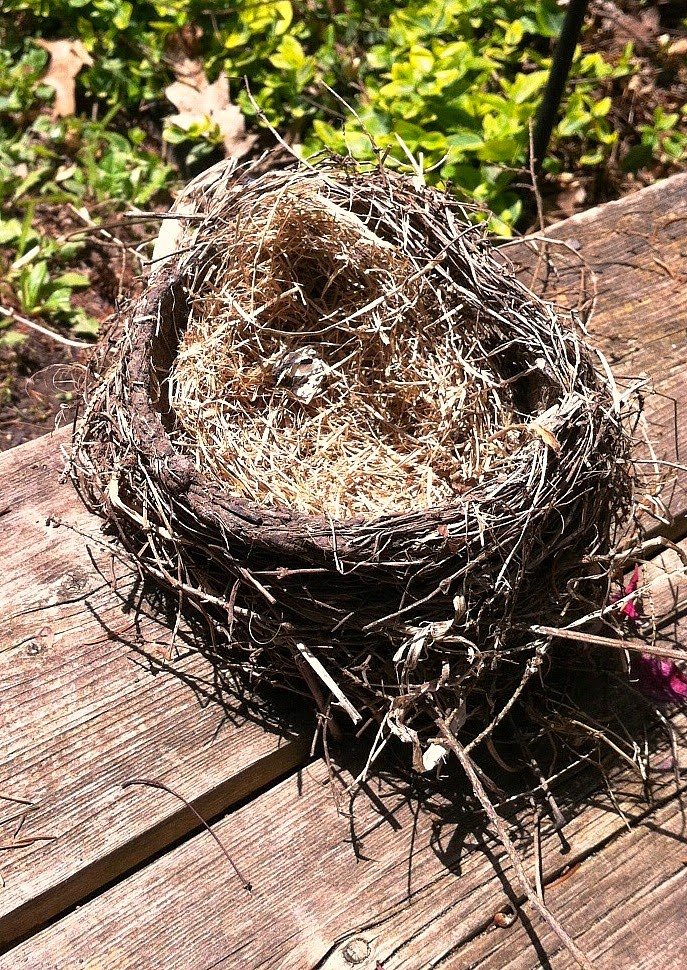 Even the grassy lining stays together. 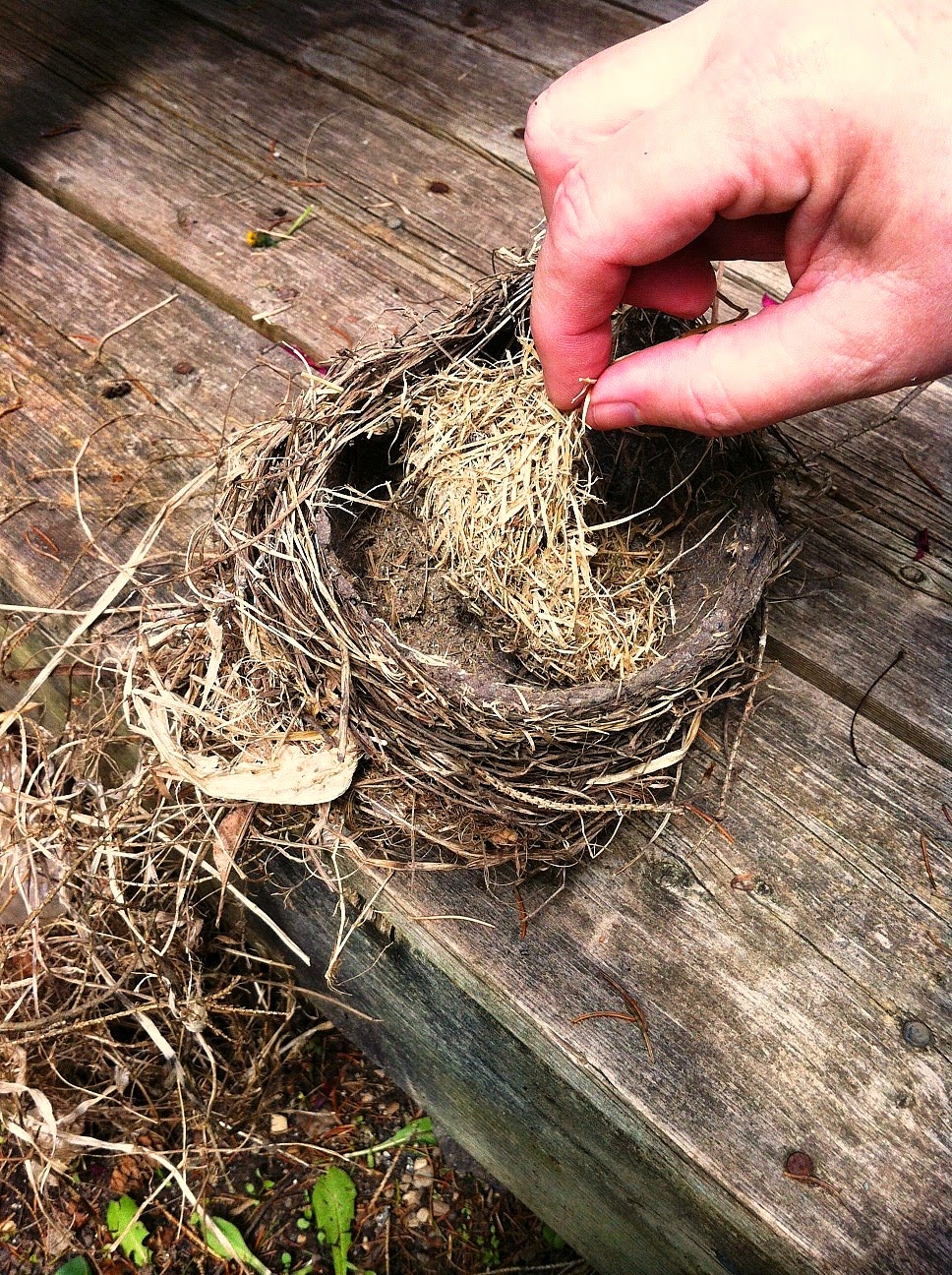 I was curious how hard and sturdy that mud shell was. I could've broken it with my fingers, but couldn't bring myself to do that. For comparison, it's at the leather-hard stage of a drying clay pot.

Toes and eyes crossed she comes back again.

I'm with you. Amazed that with just a beak they can haul all that stuff up there and wind it together in a sturdy circle. I watched mine as she brought mud, deposited it on the bottom, and then tamped, tamped, tamped it down. The build a whole new nest on top of an old one. What a pleasure to watch birds raise their young.

I meant to write, "She built a whole new nest…"

I have watched robins and other birds spin the their magic and am still in awe of what they can do and how they just know how to do it.

What got me was how she "bellied up to the bar" and, using herself as the template, formed the inner curves of the mud layer of her nest. She's still flying past and walking around right out front here but hasn't rebuilt her nest. Sure hope she does.