I've had to take my computer in to have XP wiped and 2007 installed, and forgot to transfer all my edited photos to a thumb drive so I could load them onto my new backup laptop, a refurbished and fully loaded Dell Inspiron that I got for a real deal from Anibal at PC Farm in Toronto. Personally, except for the all-important portability, I've never seen the point of laptops. To see the screen, the computer has to be elevated so high I can't type on it, I have to add a keyboard so I can achieve some blistering speed, not to mention a mouse, which equals even greater speed and accuracy. And there's my footpedal and head phones, and by the end of it, I seriously don't see the point. To lug all this around would require a suitcase on wheels at least.

Blech. But it works.

In the meantime, here are the pictures from the March 2014 iteration of The Gem Expo, which was a total hoot. Many vendors predicted a slow Friday, but attendance was way up and continued all through the weekend. I saw many familiar faces and made new friends and I hope customers for life. I got the sense that we all did well in terms of sales -- I sold out of several styles of beads and quite a few pieces of my jewellery which was truly gratifying.

I stayed again at the Strathcona Hotel on York Street (across the street from the Royal York, which is itself across Front Street from Union Station) and walking distance to the main tourist and sports venues, if anyone is planning a home game weekend). The Strath Pub grub hit the spot each night after a full day on my feet.

To me there is nothing in the world like an icy Alexander Keith's... 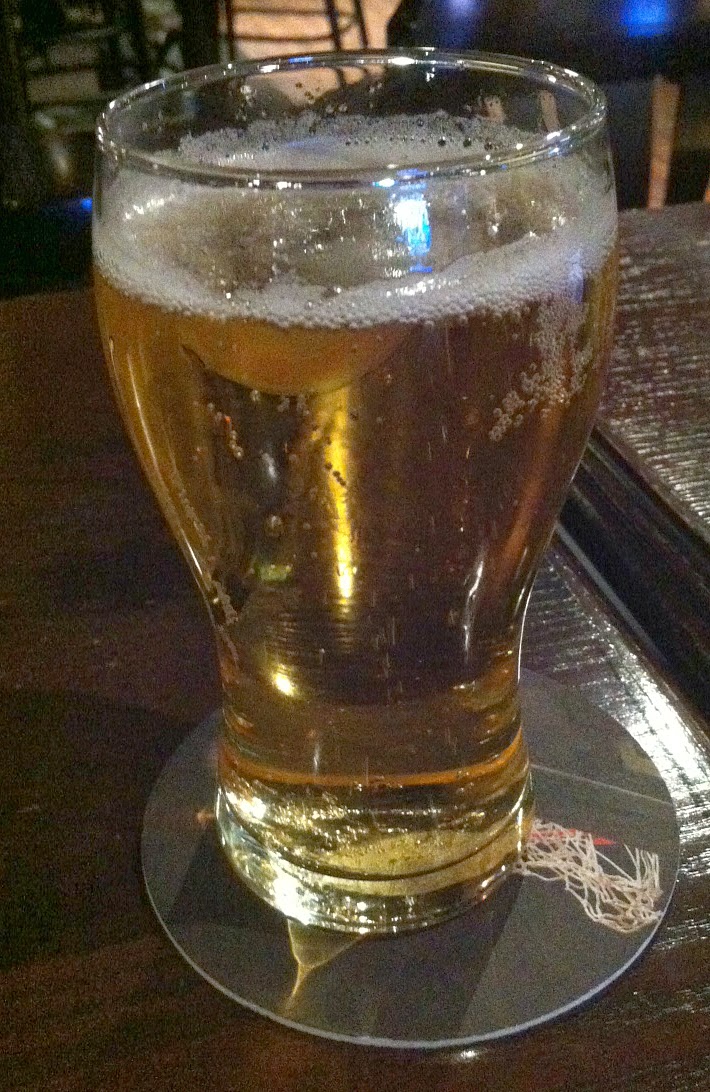 Neither of which lasted long... These are soooooooooooo good! 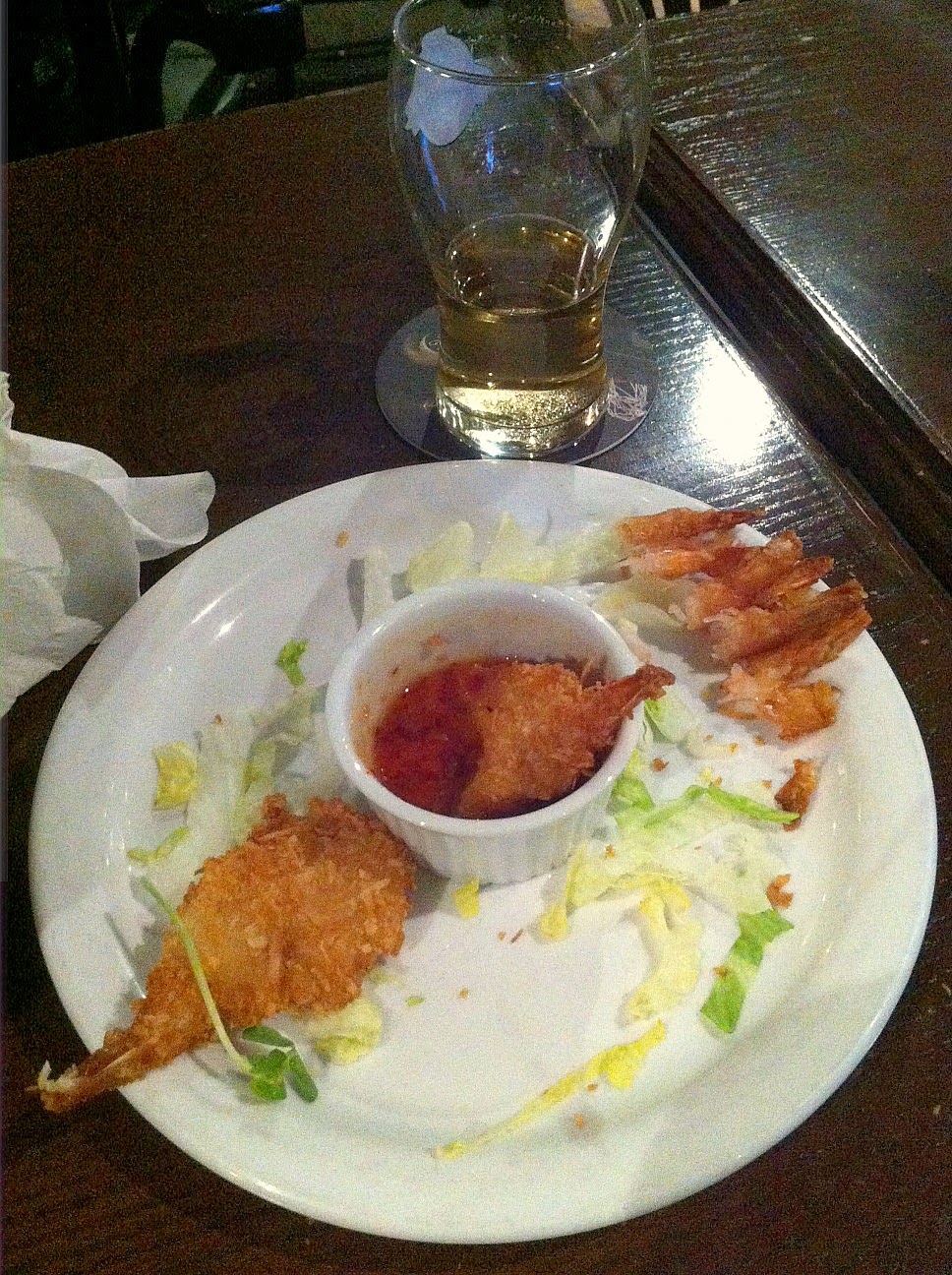 The shrimp were Friday night. Saturday night I was debating whether to have the lobster quesadilla again, but I finally decided to try out the Strath Hamburger. It was very, very good, with a profound grilled flavour. Yes, I ate the whole thing, I was that hungry. 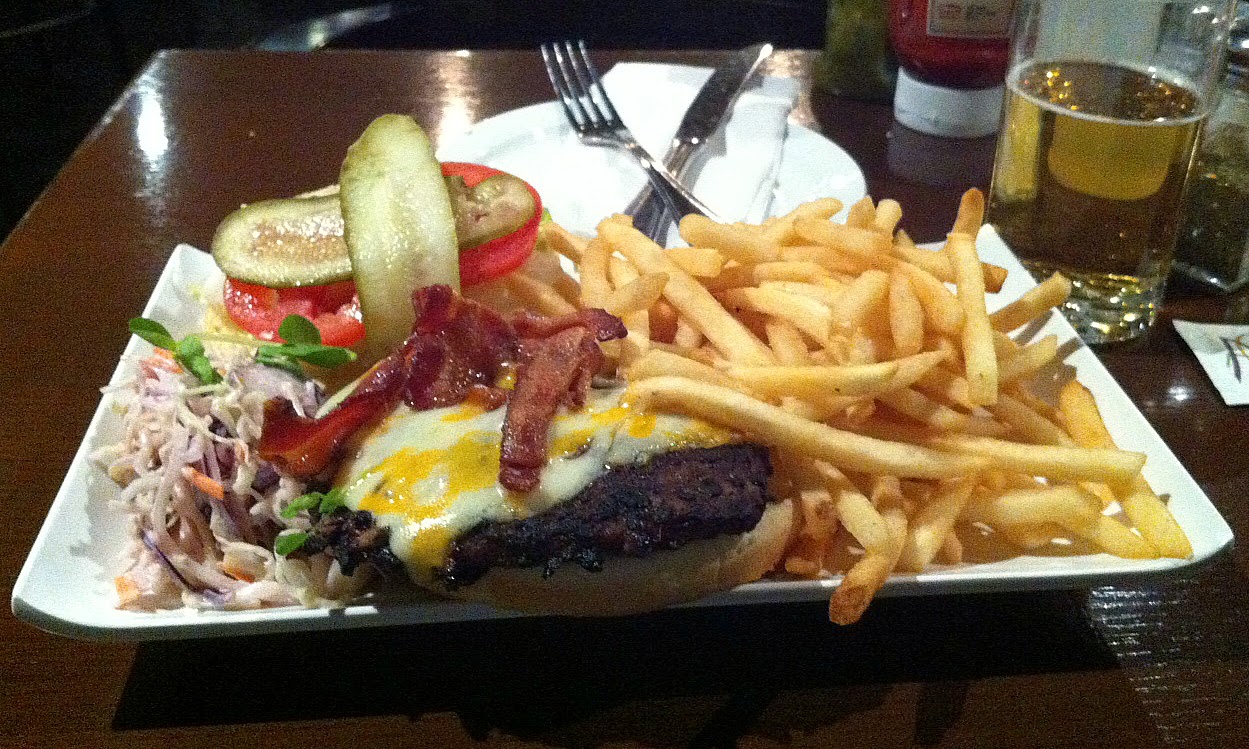 Also good enough to eat are my beads... On the left is Ruth's mother's homemade chicken and rice soup with cilantro, and shredded vegetables. I ate so healthily at this show thanks to her mom and for which I am profoundly grateful. Anyone who does away shows knows how difficult it is to eat properly. Those luscious blue beauties are ginormous chunks of raw lapis with very clean 2mm holes. Imagine blue chocolate... that's how delicious these look. 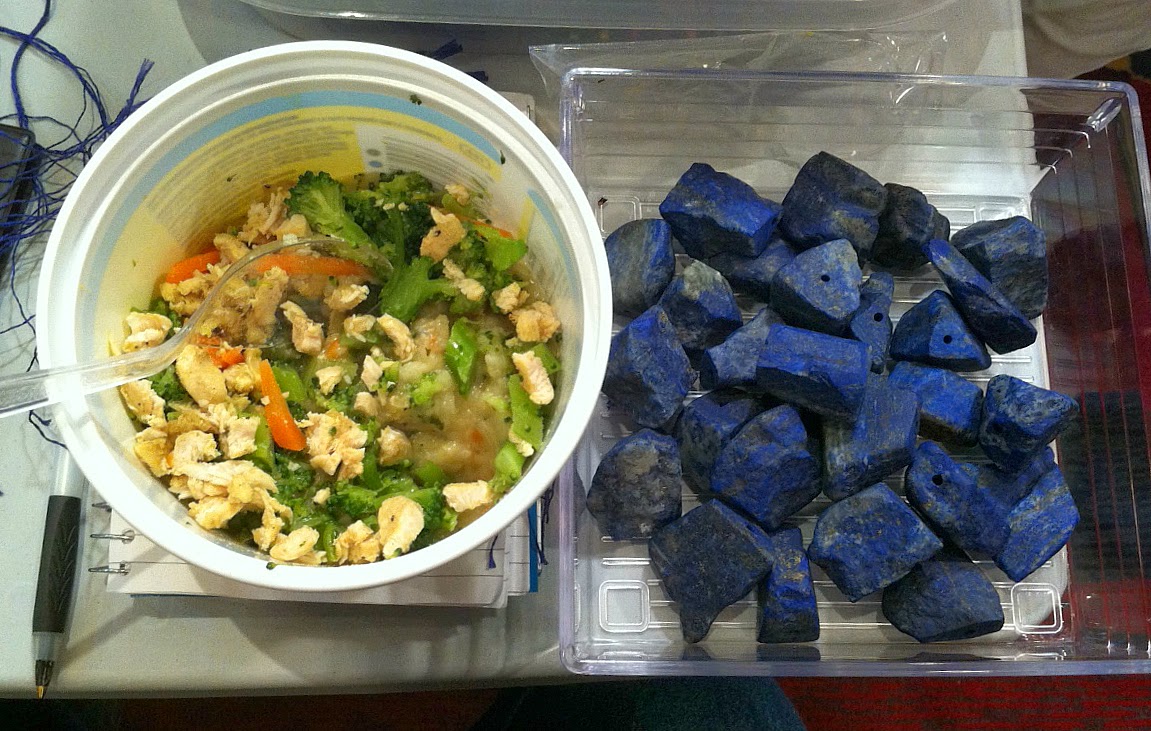 I was given the loan of a magazine with an article documenting the lapis lazuli mining process as it is still conducted today. Absolutely mind-boggling. The photo shows a man about to hike a day or more down the mountain with a 100 kilo chunk of lapis on his back. And we complain about how tired we are after a day sitting in front of a computer. Us and our first world problems, eh? 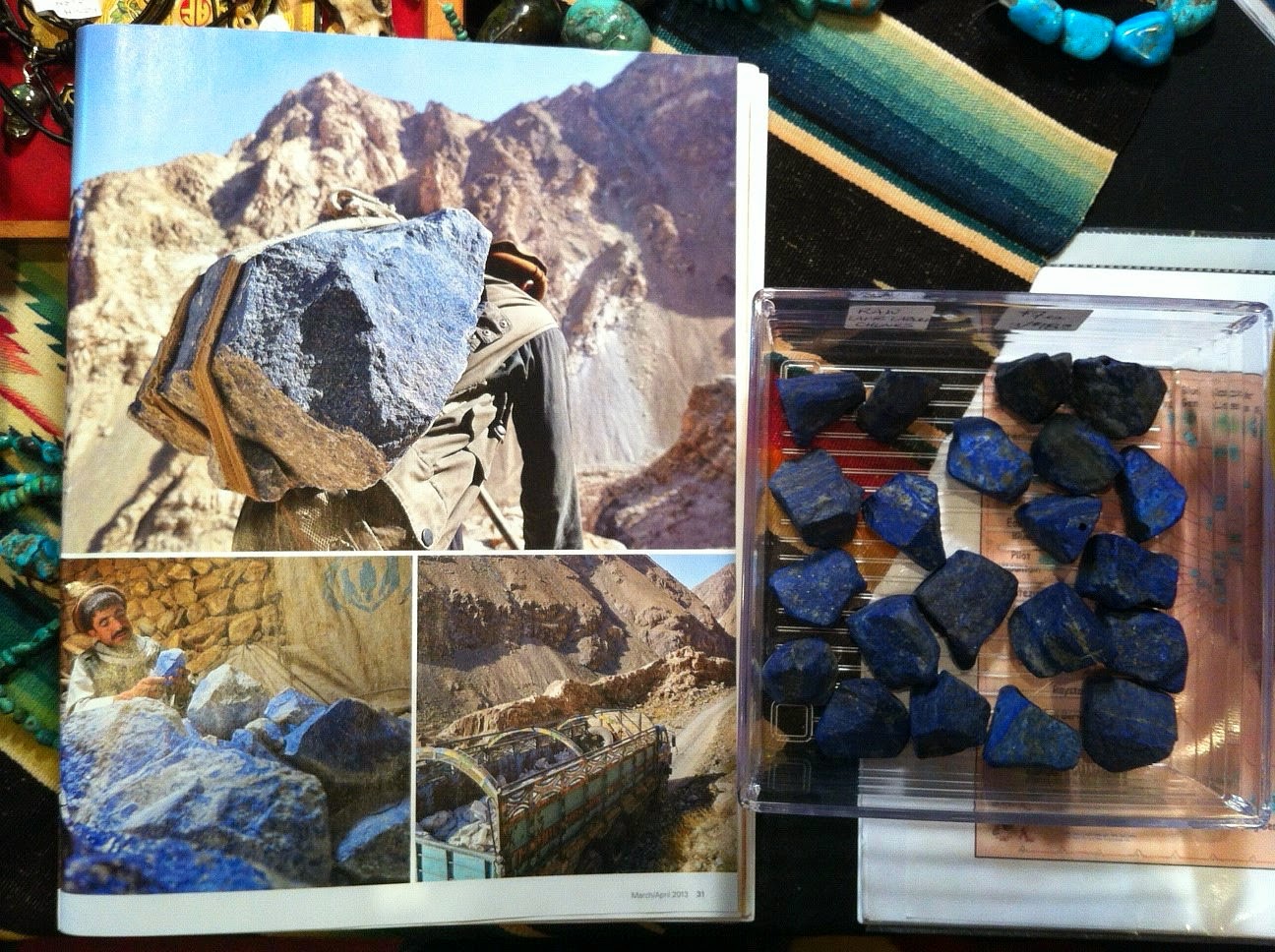 The sense I got when I received these chunky lapis beads from Nelson Gemstones was that I was holding the mountain in my hands. They really are something.

Shots of the table as you would see it coming from three different directions. I was kind of up at the top of the T when you come in the ballroom door... 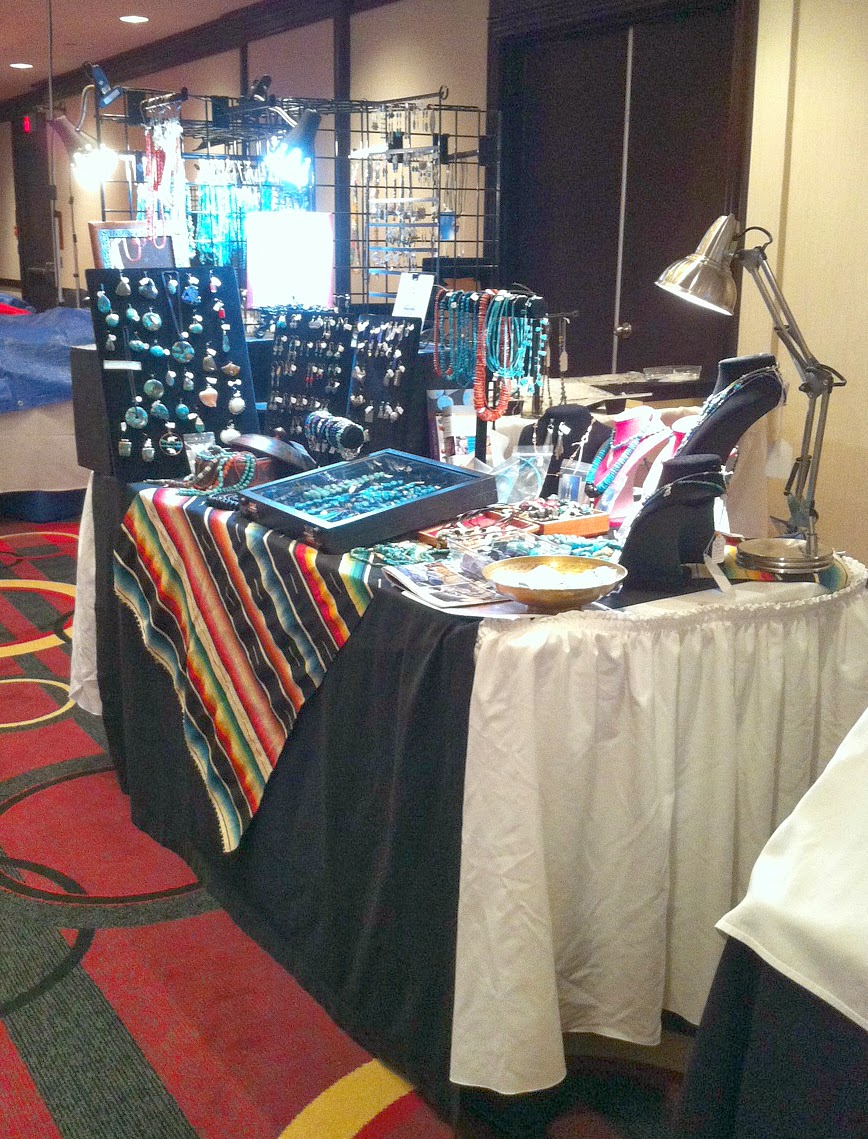 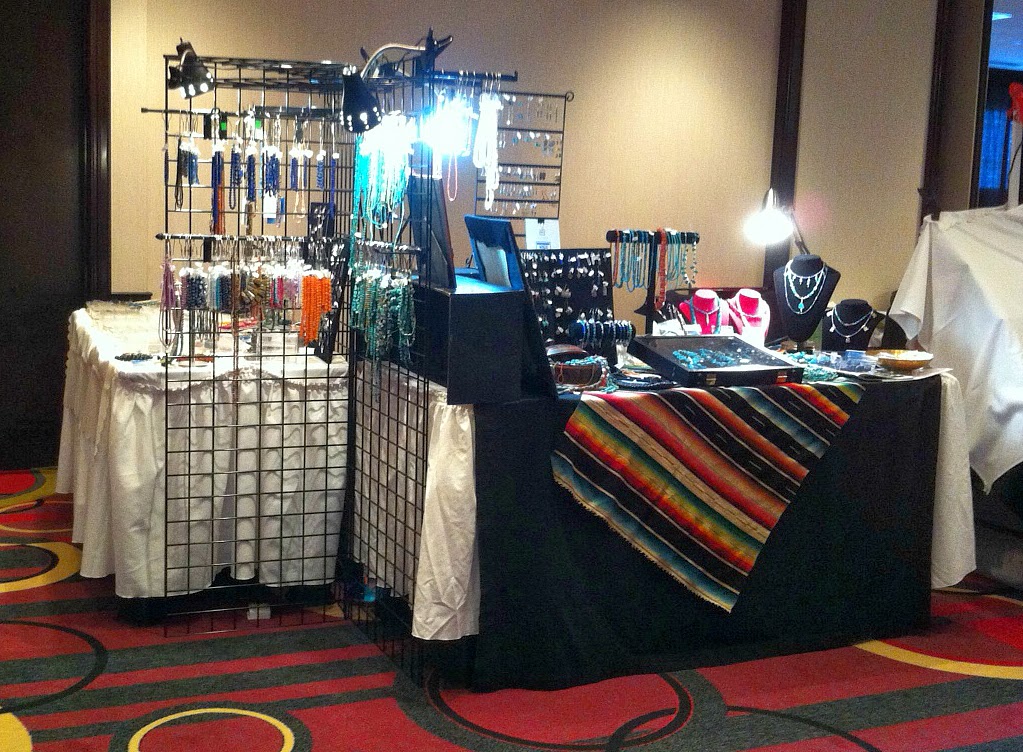 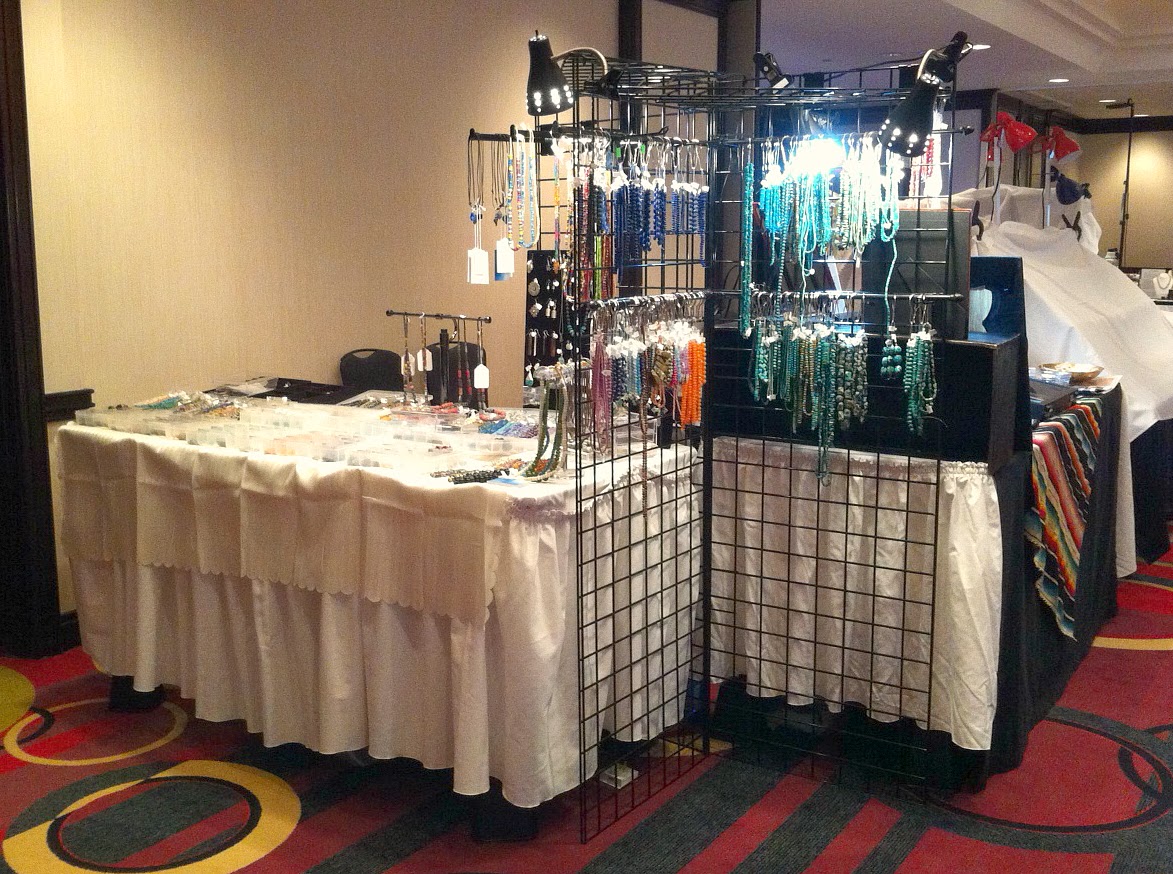 The layout of the grids was perfect. This is definitely the way to do it. People can get right up to the beads, and there was sufficient lighting, as well. I also used the bed risers on the tables, as well. It also helps to be situated near another vendor who has really good floodlighting -- that glow of light you see on the table coming out from the wall is actually from Rainbow Beads, who in terms of lighting were still a considerable distance along the wall, but that's how powerful their floodlights were.

Shots of some of the beads... this is my loose bead table. 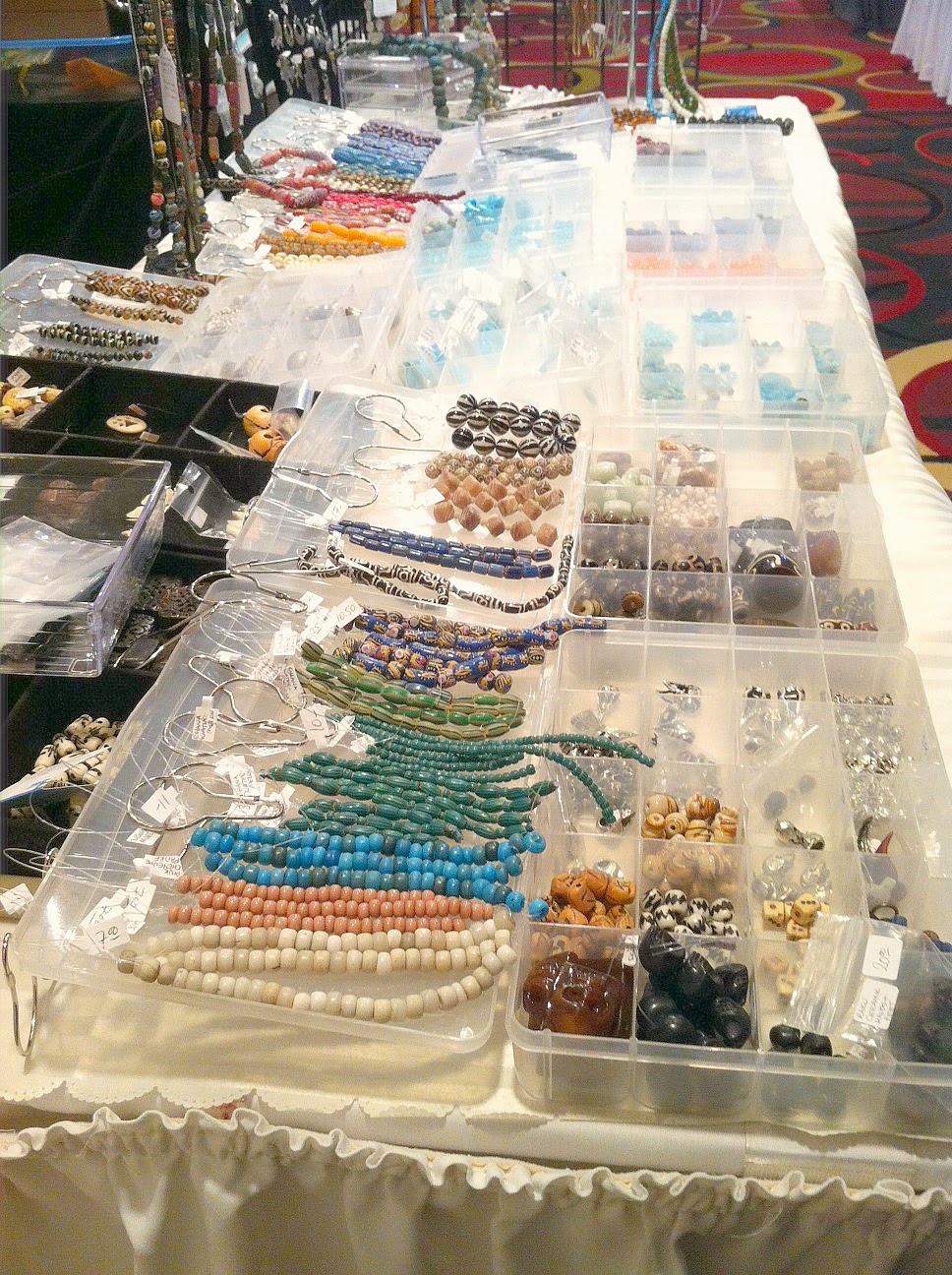 Detailed photos. If there's anything that looks intriguing to you, email me for availability/price. 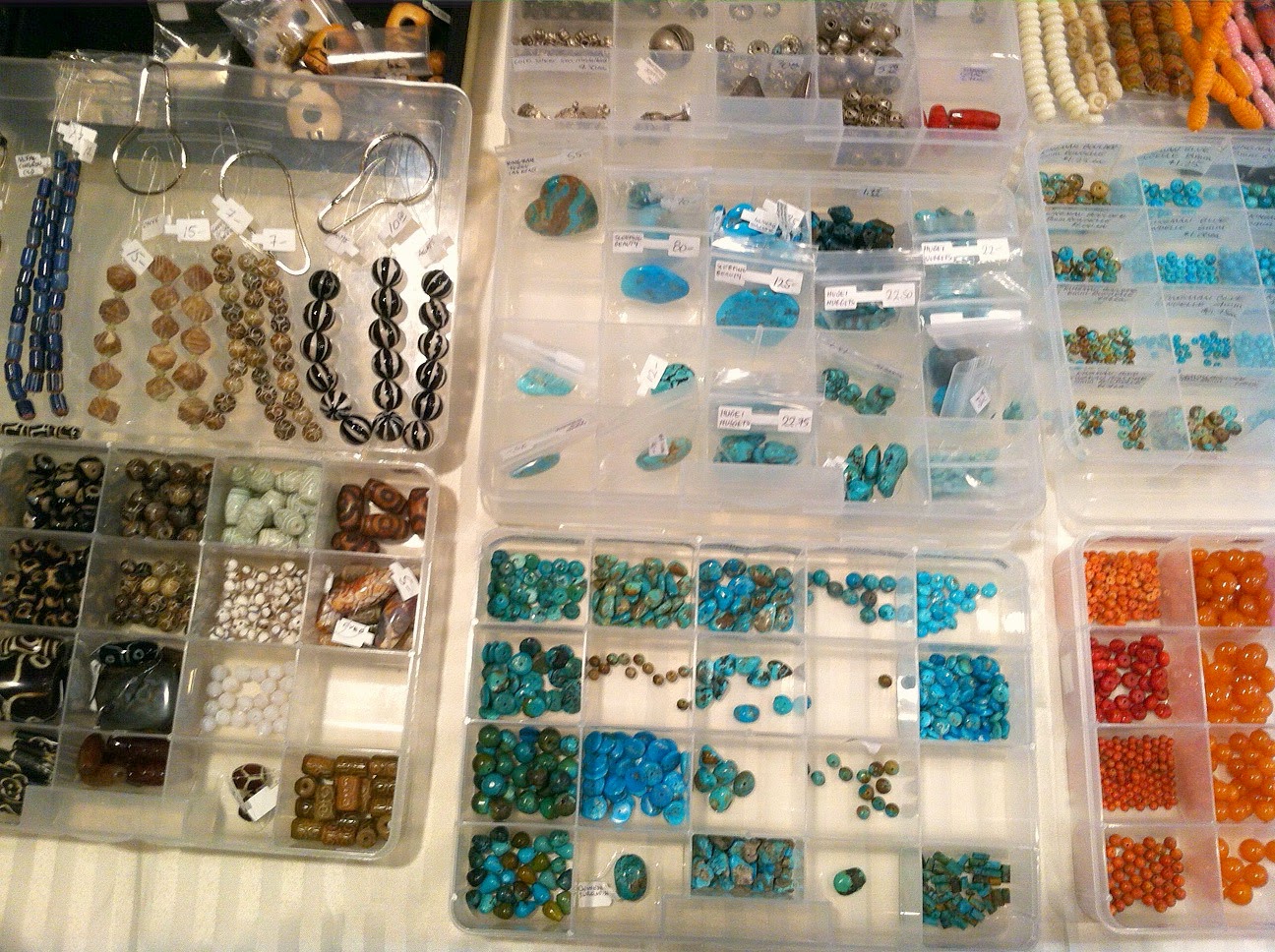 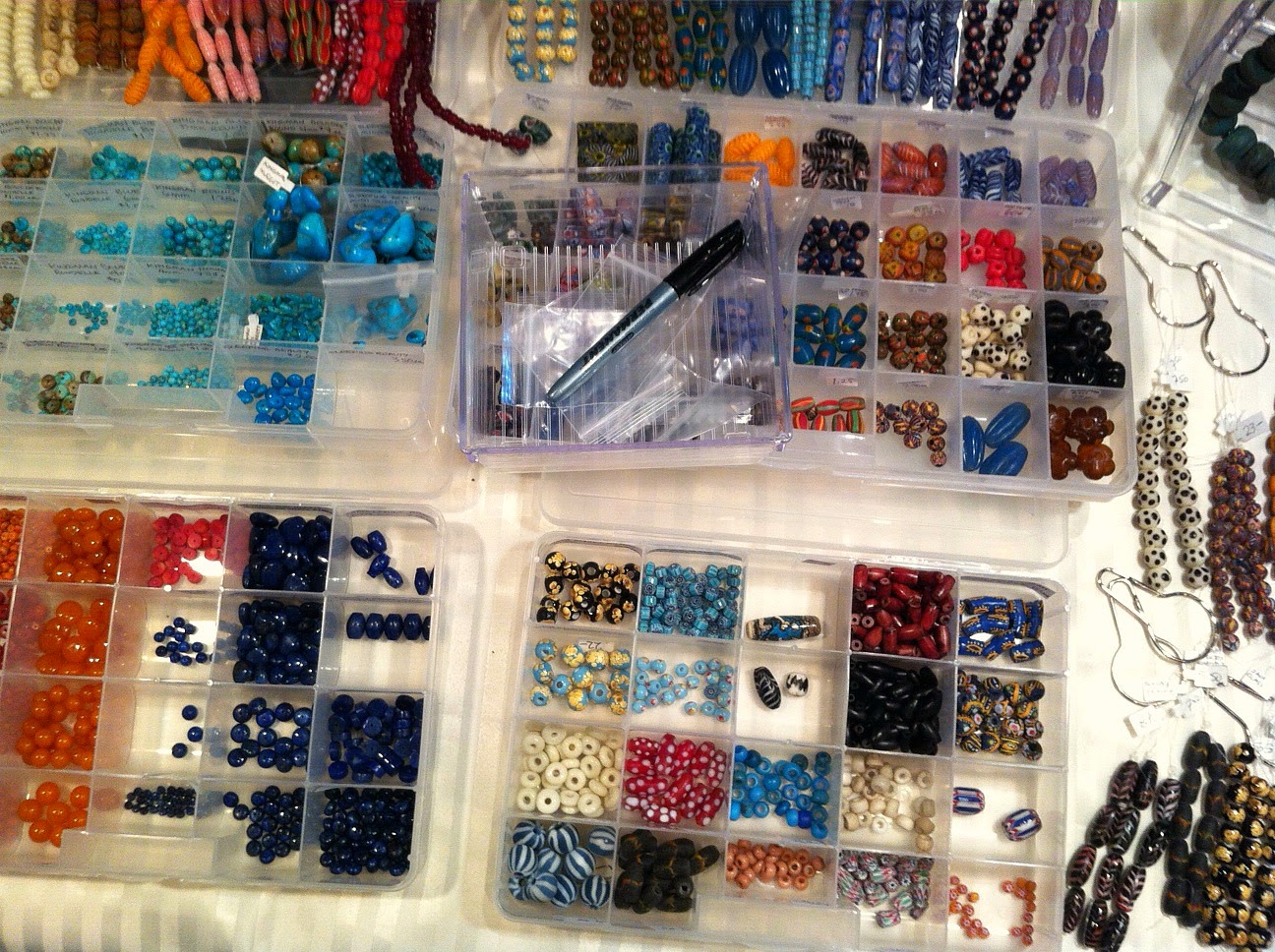 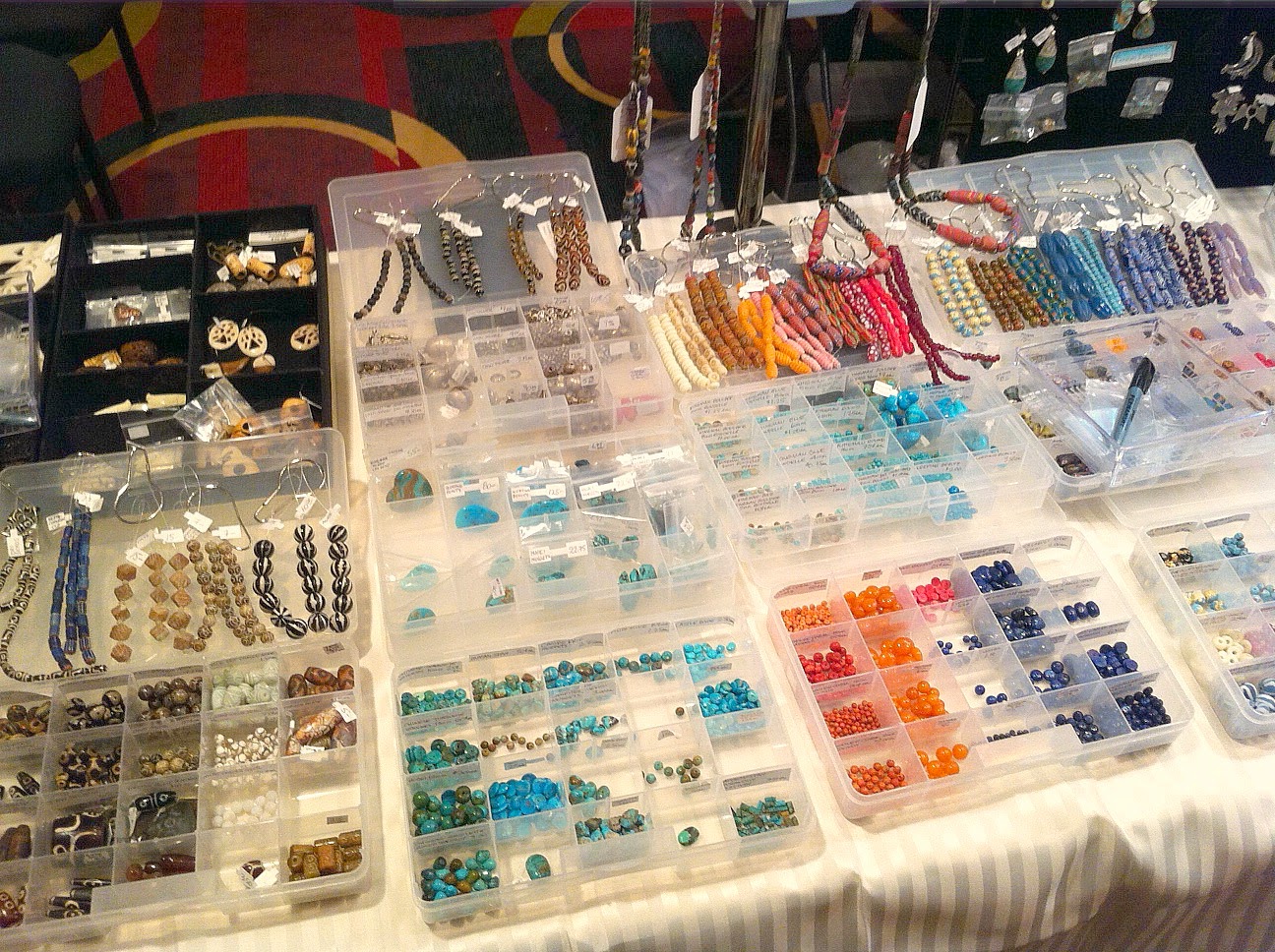 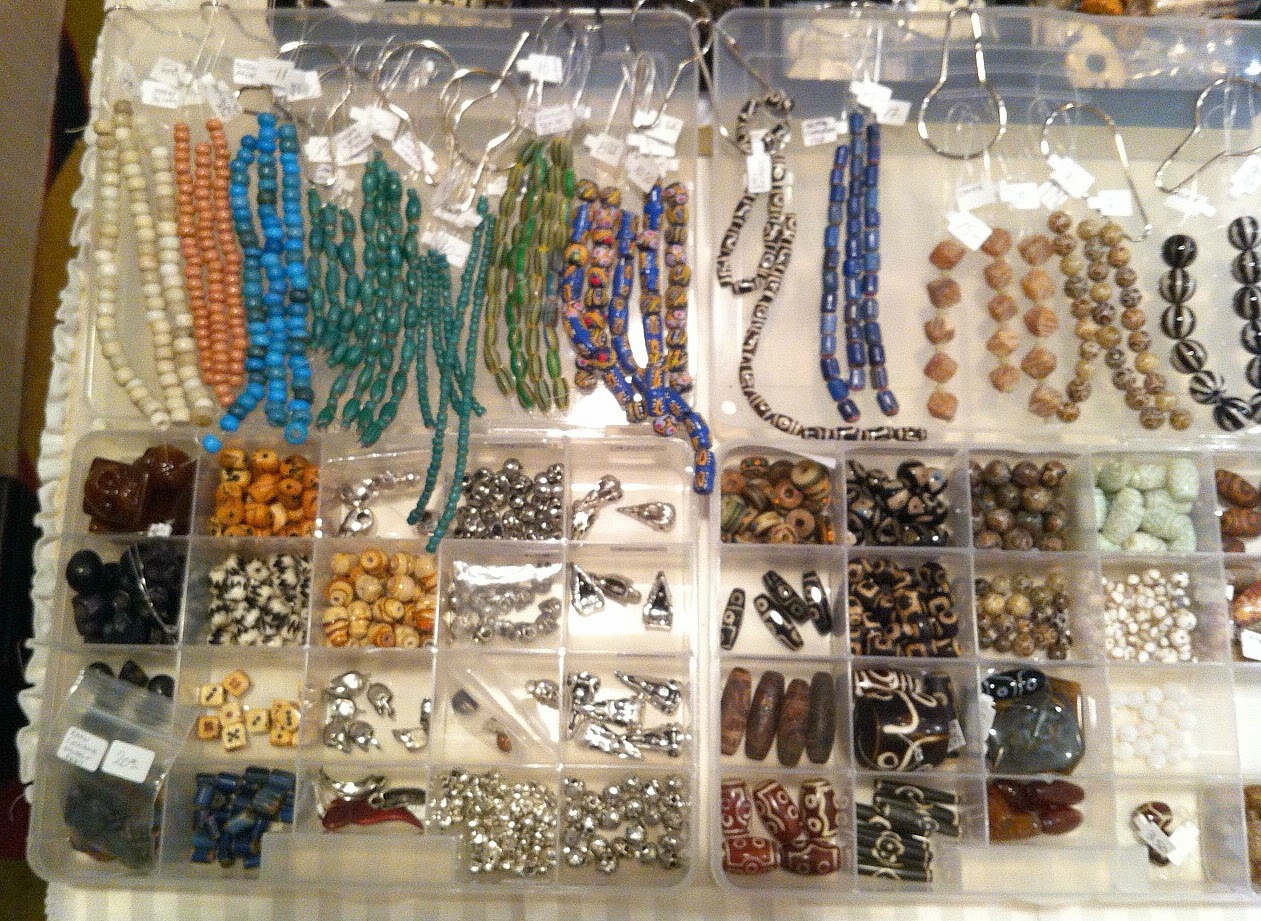 Thank you again to all my returning and new customers. You really do make the show for me and I look forward to seeing you all again. Email me with any questions and comments.