I have been having problems with my idiotPhone. All of a sudden -- well, as of last week after having the charging interrupted twice by the power going off with no notice -- it wouldn't hold a charge. The place I bought my idiotPhone from said that the battery has a memory, to not stop/interrupt charging before the battery is fully charged, other people have said, no, phone batteries now do NOT have a memory, some people/sites say wait 'til it's low to recharge, other's say wait 'til it's at 50%, don't fully charge/do fully charge -- but no one says what percentage it should be at before disconnecting the charger: 95%, 97%, 99%??? -- and I have read copious and contradictory nonsense online about what else the problem(s) might be, AND I've had the advice to leave it plugged into the charger for 24-plus hours. Last night, after leaving it charging for 30 hours I was texting someone and watched the charge drop 3% in ten minutes. From texting. So the 24-plus-hours charge obviously wasn't working. Then I decided to see what would happen if I turned the phone off completely overnight and how much battery loss would occur.

Isn't this interesting: this morning I found that not only did I not incur any battery loss past the 97% point it was at when I turned it off last night, it somehow magically reset/recharged!?!?!?! itself to 100%. Is this possible? This morning, I sent three or four texts, I've taken five or six photos of the bead chains I've been making obsessively while obsessively watching Bones for the past three or four days -- I'm thinking the characters must have whole jewellery rooms in their screen lives -- and just now talked on the phone for a total of 30 minutes whereupon the phone is down to 84% -- all after 2 hours of on/off usage, no downloading of email at all. Is this normal?

I'm now second-guessing myself about the wisdom of having an idiotPhone, which I chose solely for its ability to use Square so I can accept credit cards at beads shows and markets (and it works great for that -- IF the phone will continue to hold a charge longer than 8 hours!) and to be reachable in an emergency. 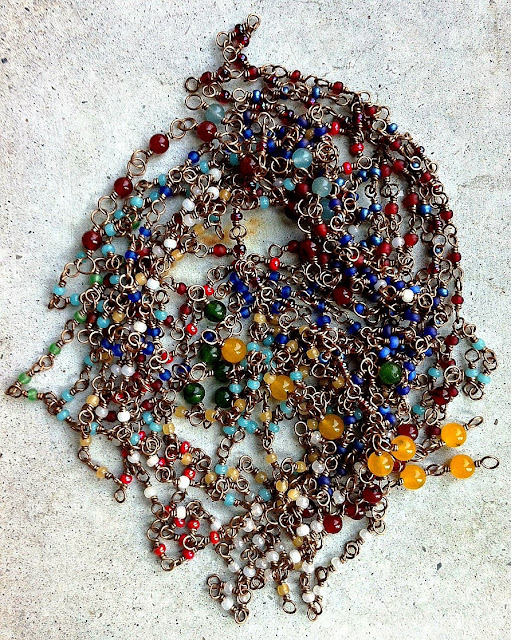 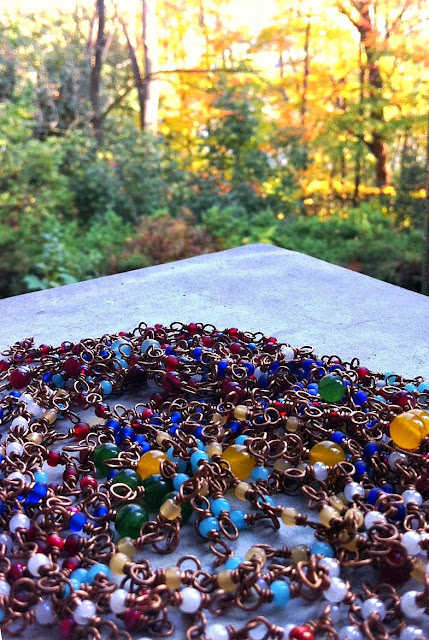 Now to figure out what to do with them all...

I'm so sorry to hear about your phone woes. I don't have a smart phone but my husband has a Galaxy Note which was purchased so that we can use Paypal Here at shows. He's really happy with it and several friends have ditched their iPhones and gotten Notes because they love the large screens.

*Gorgeous* pile of chain--we both share the love for the same kind of chain!

Thank you! What was really good was I got faster and faster making the chains.

I really hate having to have any phone at all. Up here, there are only two phones that take Square (still don't have the PayPal thingie yet) and it just happened that there was a sale on the idiotPhone + contract the day I walked into the store. 16 months to go...