Does anyone remember peach fuzz? You know, that fuzzy stuff that peaches used to be covered in? Where did that go? And what's with peaches hard as a rock, dry and woody, picked green that never ripen but rot brown within a day or two? I actually broke down in the dead of this past winter because it was so freakin' cold and long and bought sliced frozen peaches because I absolutely had to have jam... they were GREEN and woody and tasteless -- and still rock hard even after I thawed them.

Hello... just like strawberries, peaches do not and will not continue ripening after they've been picked.

I have to admit I'm something of a purist when it comes to jam. I don't like weird combinations of flavours first thing in the morning and I sure don't like added chemicals, and I can't stand things so sweet my tongue burns. As a freezer jam maker of almost 10 years who picks out each berry and examines it carefully, trust me, you do not want to know WHY your commercial jams have a weird chemical smell and taste and have that glow-in-the-dark, peculiarly otherworldly colour. No fruit on earth is that colour -- so, yeah: otherworldly. Jam processors don't have time to carve away rotten spots, check for bugs and remove all the green leaves and unripe bits: every little thing goes into the hopper.

I wrote last year about making strawberry jam. This weekend, I'm making early peach jam. I keep forgetting the name/breed of these peaches that come from Niagara -- they're not Red Havens. They're only available for a few weeks just past the middle of July-ish but so worth it to track down. They actually smell peachy and are juicy and soft, not hard as a rock and hairless -- the skins are still fuzzy. A little bit -- and they actually taste like peaches used to taste. What a novel concept.

Now this is where I'm sure I'm gonna get slammed (but please don't bother): you do not need to use a ton of sugar to make jam. Because it's so tart, in four cups of cooked rhubarb, for example, I might, just maybe, put four level soup spoons of sugar max, but pretty much all other fruit almost always it's only one and a half to two spoons, and yes, I use white death. Tolja up above I'm a purist. Or maybe old-fashioned that way. Honey is for other things... baclava, per esempio -- or drizzled on fried chicken. Now, that is heaven. Hah -- there's something I haven't had for over 40 years. But not jam. And forget chemicals. I even spent a whole summer once experimenting with stevia. I never could get past the incredibly bitter chemical aftertaste no matter how little I used.

So. Sugar. You do NOT need to use ALL THAT SUGAR. I mean, cooked jam recipes calling for SEVEN cups of sugar to four cups of fruit? Oh, please. It's the pectin that preserves the fruit, not sugar.

You want to know what the secret is? Lemon juice. Upwards of a quarter cup. Taste the jam before you put it in the jars. It should taste just a titch too lemony -- but trust me, it will fade completely into the background after you thaw out the jam and it so wonderfully enhances the flavour of the fruit. Gives it tang. Yummers.

Pectin. Over the years, I've tried several brands particularly formulated for low-sugar no-cook jam, and they all work just fine. I've also played around with exactly how much pectin to put in depending on how juicy the fruit becomes when crushed. After a while, you get used to how "pulled together" and shlumpy the fruit needs to be for optimum texture after freezing and thawing. The trick is not to use too much, or you'll get that cheap pie-filling gluggy texture, but just enough. If the fruit is really juicy (rhubarb, seedless Coronation grapes, blueberries), I'll add add a little bit more very gradually from a second package. Overall, though, it's very forgiving. I'll do a taste test, and even stir in a bit more lemon juice after I've finished adding the pectin. It's fine. Even if the pectin brand says it's fine to eat right away, I still prefer to freeze the jam at least overnight, pull a jar out of the freezer, let it thaw in the fridge for another day and it'll be perfect. Just fruit is all you'll taste.

My handy dandy potato masher. It's the best for smashing up fruit. Works much faster and is less messy than chopping little tiny fruit into tiny little bits. Releases lots more juice, too. I like my jam lumpy. When I was first making sour cherry jam, I used a blender, but that made the texture too smooth and creepy. Then I remembered my potato masher, and it worked perfectly.

Some of my freezer stash: rhubarb in the 500 ml jar, strawberry and peach jam in the 250 ml jars (and some soup at the bottom). I'll get seven or eight 250 ml jars out of two pint baskets of strawberries, and 6 to 8 jars of peach jam out of a six quart basket, or about 10-12 peaches. Depends on their size and how much I have to cut away. 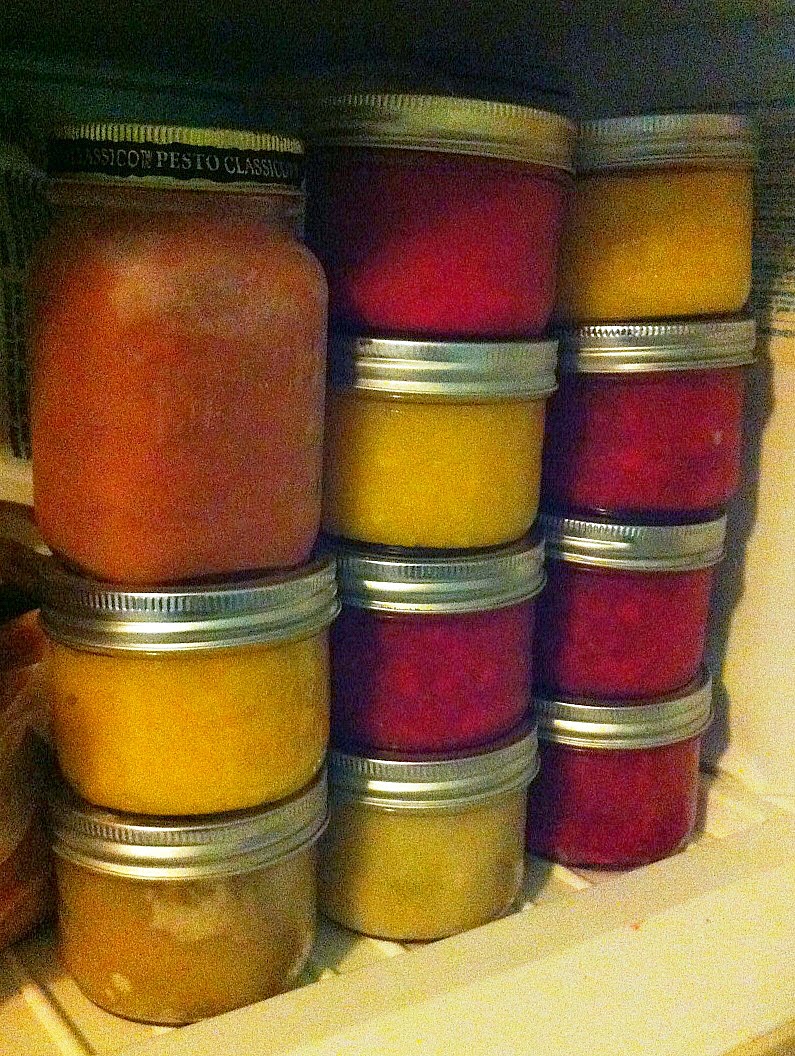