Working On A New Wire-Weaving Skill...

The other day I opened Pearl Blay's Beading Gem post on How to Make a Swirling Double Wire Pendant by Making It Easy with Liz, and my immediate response was "Oooooooh". I've been seeing these double wire swirls around the Internet more and more frequently but hadn't attempted any of my own. Time to break out the one-pound rolls of copper wire I bought just before Christmas at Robert Hall Originals in St. George.

In the midst of all my oooohing, I kind of glossed over Pearl's warning about this project not being for beginners. I also didn't really read the part of the title underneath the video on YouTube where it says "Experienced". The result became more Oopsies than Ooooh.

Last night, I queued up the video and watched again as far as the materials list (I'd previously watched the entire video through once). I dug out some very chunky citrine beads I acquired who knows when or from whom, cut some wire and forged ahead doing what I thought I remembered. The first part went well but, yet again, where I screwed up was finishing off the pendants. I ended up with pointless clumps and lumps of twiddles going nowhere. Because the wire was hardening at an alarming rate by now, I also bent and goinked the wire and the whole pendant got really floppy.

With my first attempt, I also ended up with the back looking better than the front and therefore showing the bail (which in Liz's design is intended to be hidden). The second pendant went a little bit better in terms of initial swirls, but failed even more miserably as a functional pendant.

Here is Liz's picture of what the pendants are supposed to look like: 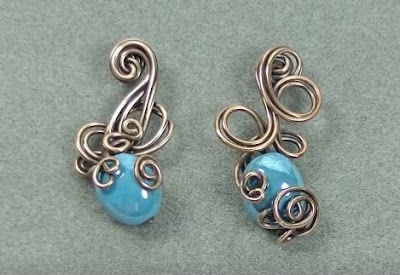 Here are my first two efforts. The fronts of my two pendants, where the top bits are working well... but then it kind of all falls apart, doesn't it!?!? 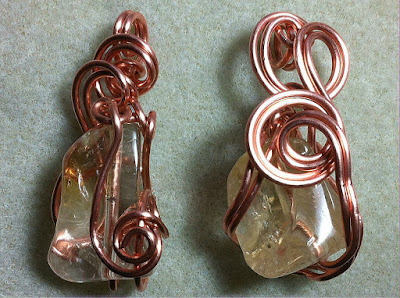 ...and the backs. The swoopy swirls work on the one side of the back of the pendant on the left, but... again, they're on the back, and both wraps kinda fell apart on me anyway: 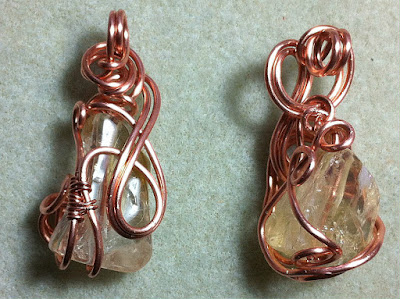 All I can say is, good thing I bought a pound of wire -- each of these pendants took about two feet of wire, the bottom halves of which are going to have to be tossed. I'm thinking I might be able to recoup the top bits, hammer the wire ends into curves and wire-weave them into something else.

By this time it was getting late. I still had all the citrines dumped on my bead mat anyway, some large matte black obsidian beads were in close proximity, so I threw this together in only a couple of minutes. This is one bracelet I really like: 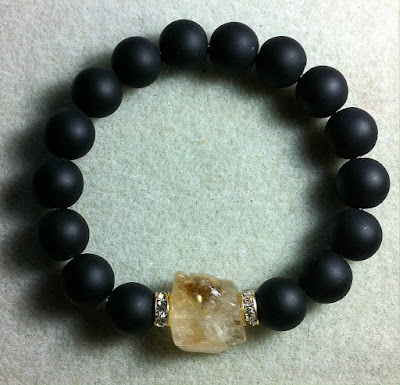 So far so good this morning: there is no typing, and so it's back to the drawing board, but first I'll watch Liz's video a few more times.

Looks great! I really love wire, because it's flexible and it's fun to make it look 'haphazardly' if you catch my drift. So, even though it may not look like Liz's pendant, I love yours! Love those beads too by the way. Gorgeous color and I love that they are rough around the edges. Just keep practising ;)

Hi, Geeske. Thank you. Hope you had a wonderful Christmas and New Year's. Yeah, I started to watch the video and immediately figured out my primary problem -- I only used one wire to make the pendant, whereas Liz has two wires. Hahahahah When in doubt read the instructions, or in this case, watch the video as many times as it takes. I cut the old wires off and I've started over. Just finished working for the day, so I'll see what I can get done tonight.

I love raw stones, too, and buy as many as I can find.
B