...finally got back to it on Sunday while sitting at the Nostalgia Show & Sale and then finished it today. This is the pendant I started well before Christmas -- you can see above on the masthead how far I got. Then the proverbial shite hit the fan and life became a monstrous blur for several months. One foot in front of the other, and don't look down. Then six or eight weeks ago or so I got absolutely deluged with typing which only let up on Friday.

Last week I'd set up a table outside to sort items for the Nostalgia Show and decided to leave it up all summer. Truth is, I'm too lazy to take it down and heave it back into the house. Today I cleared off accrued tree spit and whatnot and finished that pendant... almost. It looks okay in my hand, but as soon as I edited the photos I saw it wasn't reading, and figured out what needs to be fixed. I'll do that tomorrow. Let it percolate overnight in case I see something else needs tweaking. Of course I'd completely forgotten what I'd planned for the bail... and now there isn't one. That's something else I have to sort out. I think jump rings might wear away at the fine weaving wires, but I like the simplicity of the pendant as it is now. I may just string it on soft leather lace as is.

My outdoor studio, complete with deer flies, the big black ones with festively coloured eyes that you don't feel landing, only when they bite. For some reason they were biting me through my clothes, not my skin, which I found very strange. 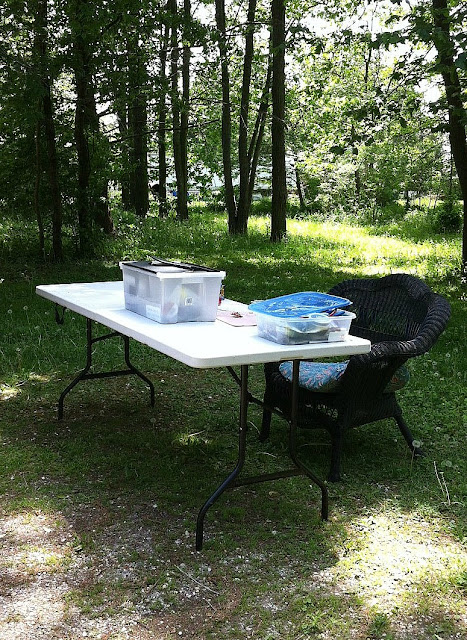 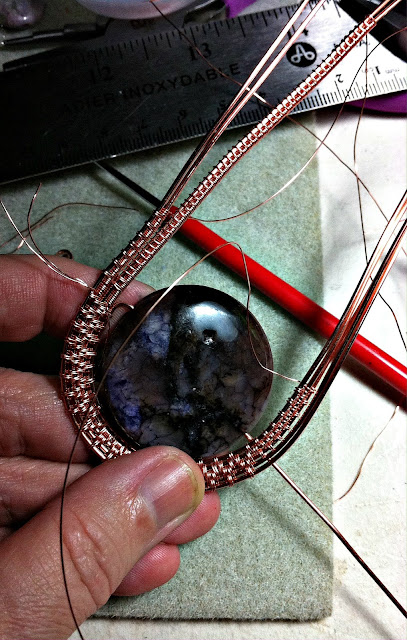 On Sunday, I'd remembered that I wanted to do something like that double curl at the bottom of the pendant, but the rest? Boh. So I started weaving and entwining... What I was definitely mindful of was producing a fully reversible pendant (this being the nominal front). 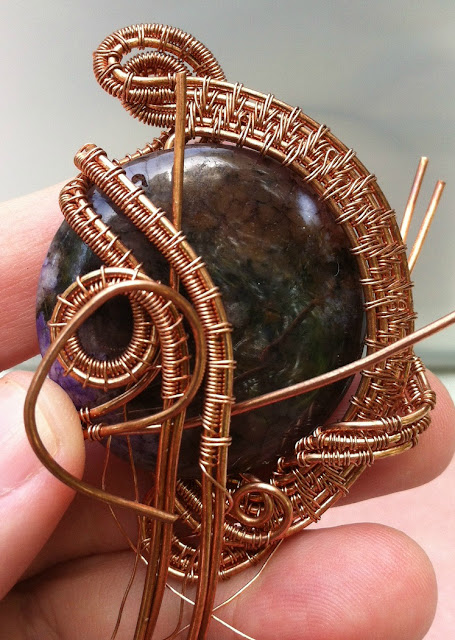 NO POINTLESS TWIDDLES this time, please and thank you! I did get quite ruthless in the end and hacked away. 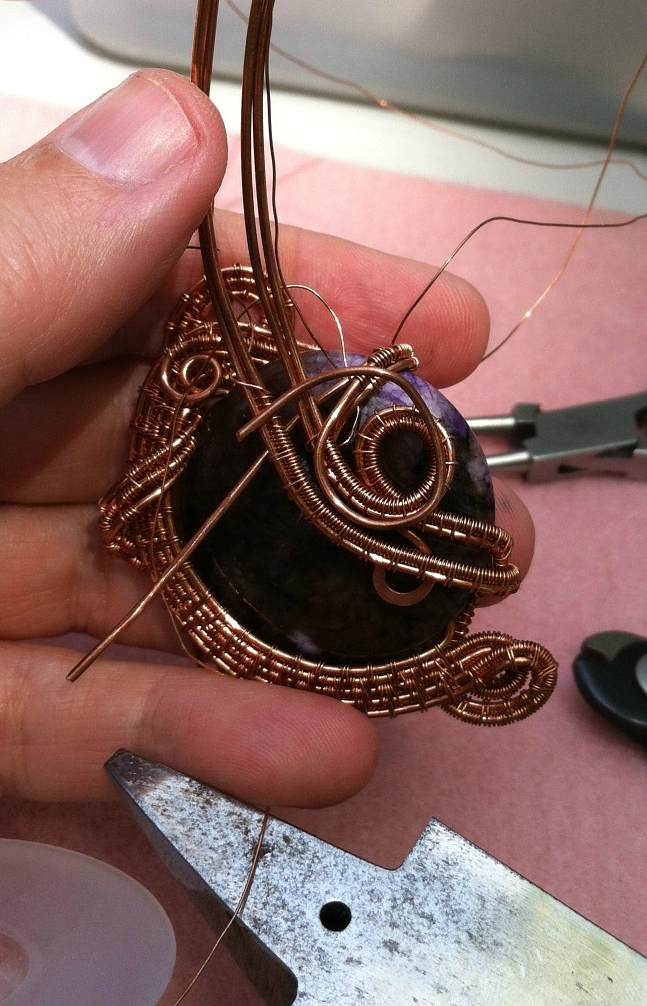 Worked on hammering those lovely and elegant curvy curves that I admire so much online. This is when an anvil comes in handy, versus a plain bench block. 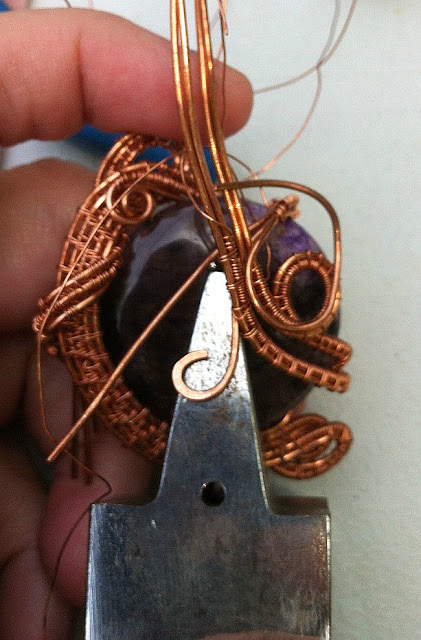 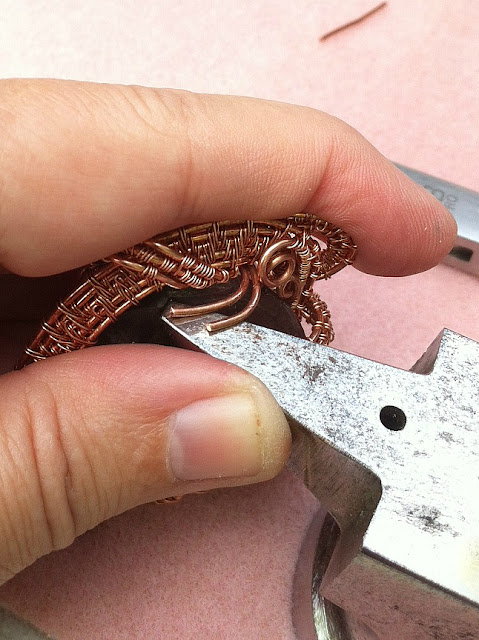 These are the two sides finished. This was supposed to be the back; yet again it looks better than the front. Not sure about that single curl in the lower right area... might disappear that tomorrow, too, or at least curve it into that woven bit more tightly. It's a structural piece that locks the two sets of weaving together. . 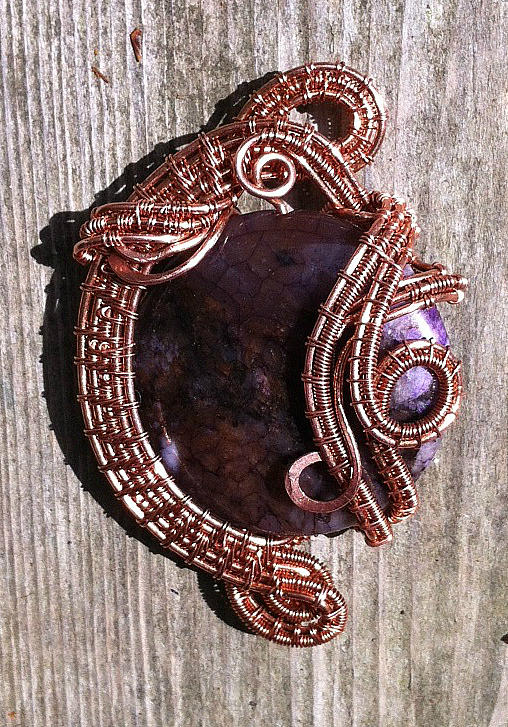 A little overexposed, but this photo of the front shows off the bead quite nicely. See that kind of "wave" dipping across the top of the bead? That's going to be gone tomorrow. It will wrap around and hide the wire coming out of the bead and I hope make the overall design stronger. 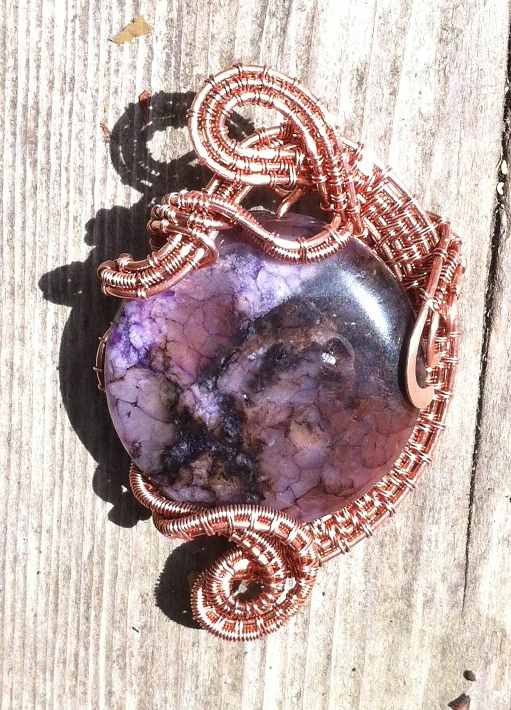