I decided a few weeks ago to take part in the March 8th edition of the Nostalgia Show and Sale here in Woodstock to dip my toe in that water, see how it goes. These are my thoughts and impressions doing this type of a show. I should note that it's not the first time I've done collectibles shows like this -- in the '70s and '80s at least, these WERE the typical offerings at flea markets, not somebody going to a wholesaler, buying a table's worth of electronics, dumping it on said table and that's it.

There were quite a number of one-off vendors like us, first time at the show, not sure if it's worth it and/or if we/they will be back. The lady next to us had a table full of teacups and saucers, cut glass, Royal Doulton-type figurines and assorted old ceramic and china dishes from her mother and mother-in-law that no one else in her family wanted.

Set up for pal Brenda and me was way far easier than setting up for the Gem Expo (I'm already shuddering at the thought of that come Thursday evening). Four or five small boxes and bags of items, a couple of large pieces tossed on the dolly and Bob's your uncle. Note that upside down table with the old wringer washing machine legs on the dolly... because you won't see it again: 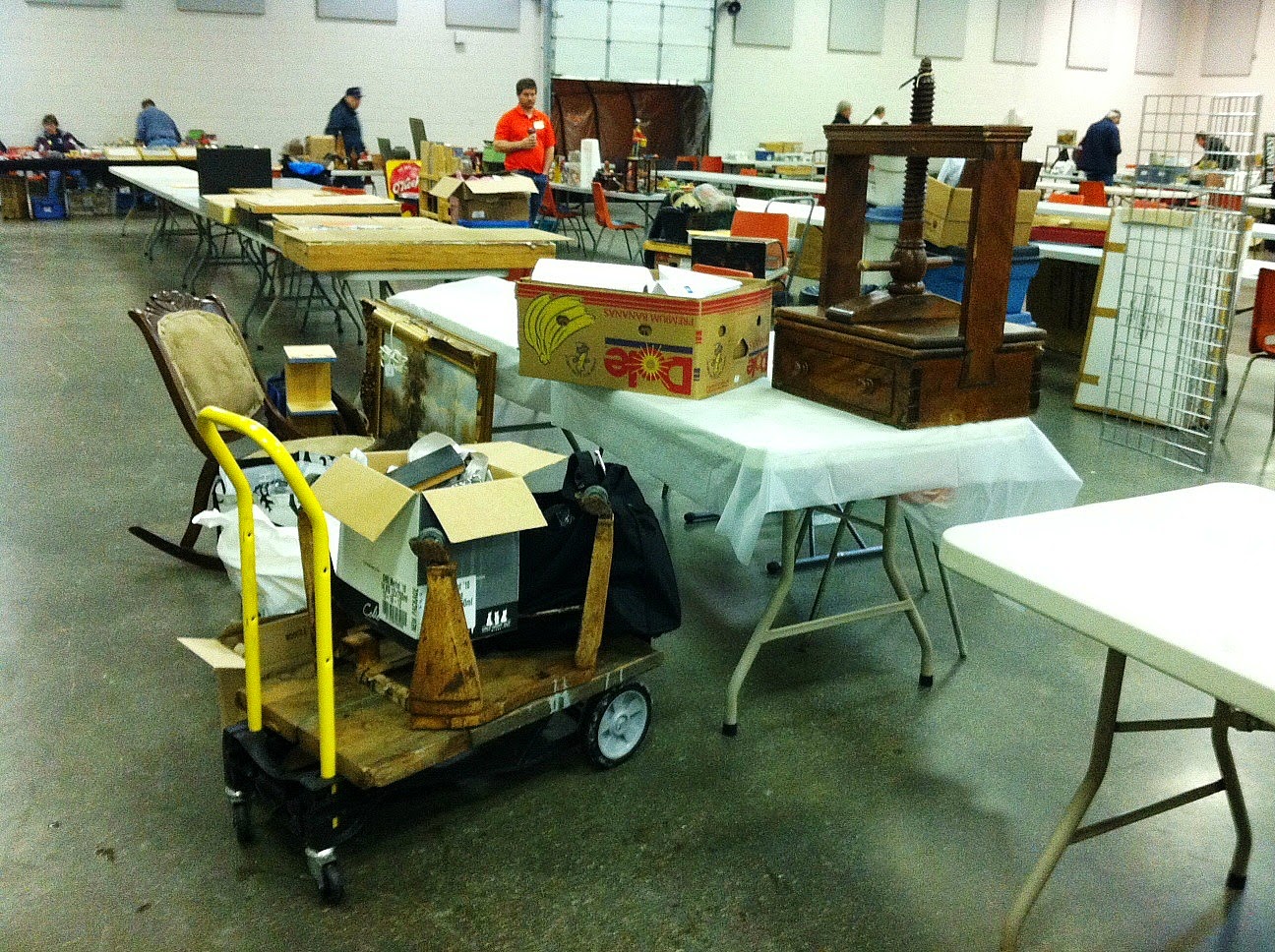 Here's the table in action this past summer: 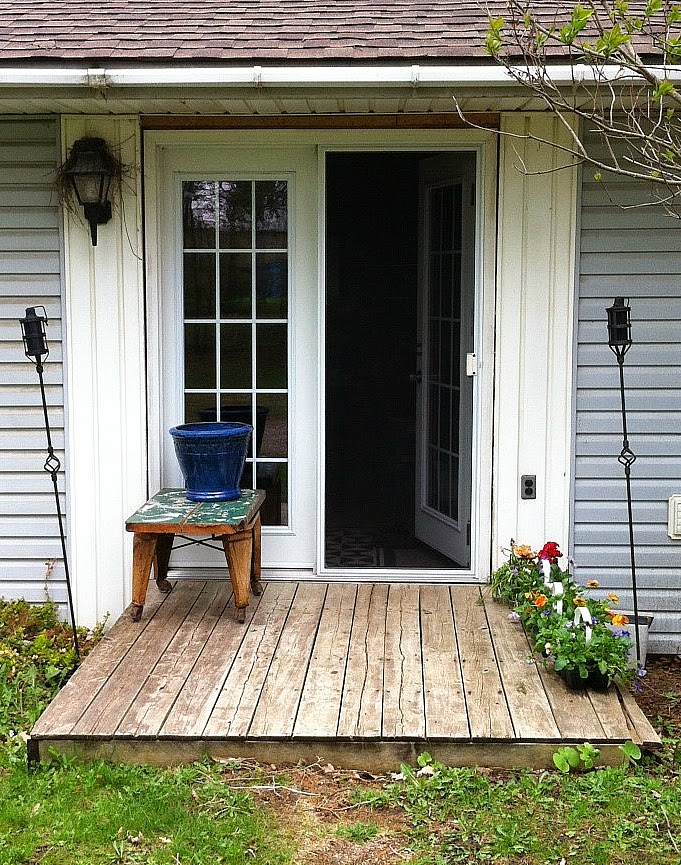 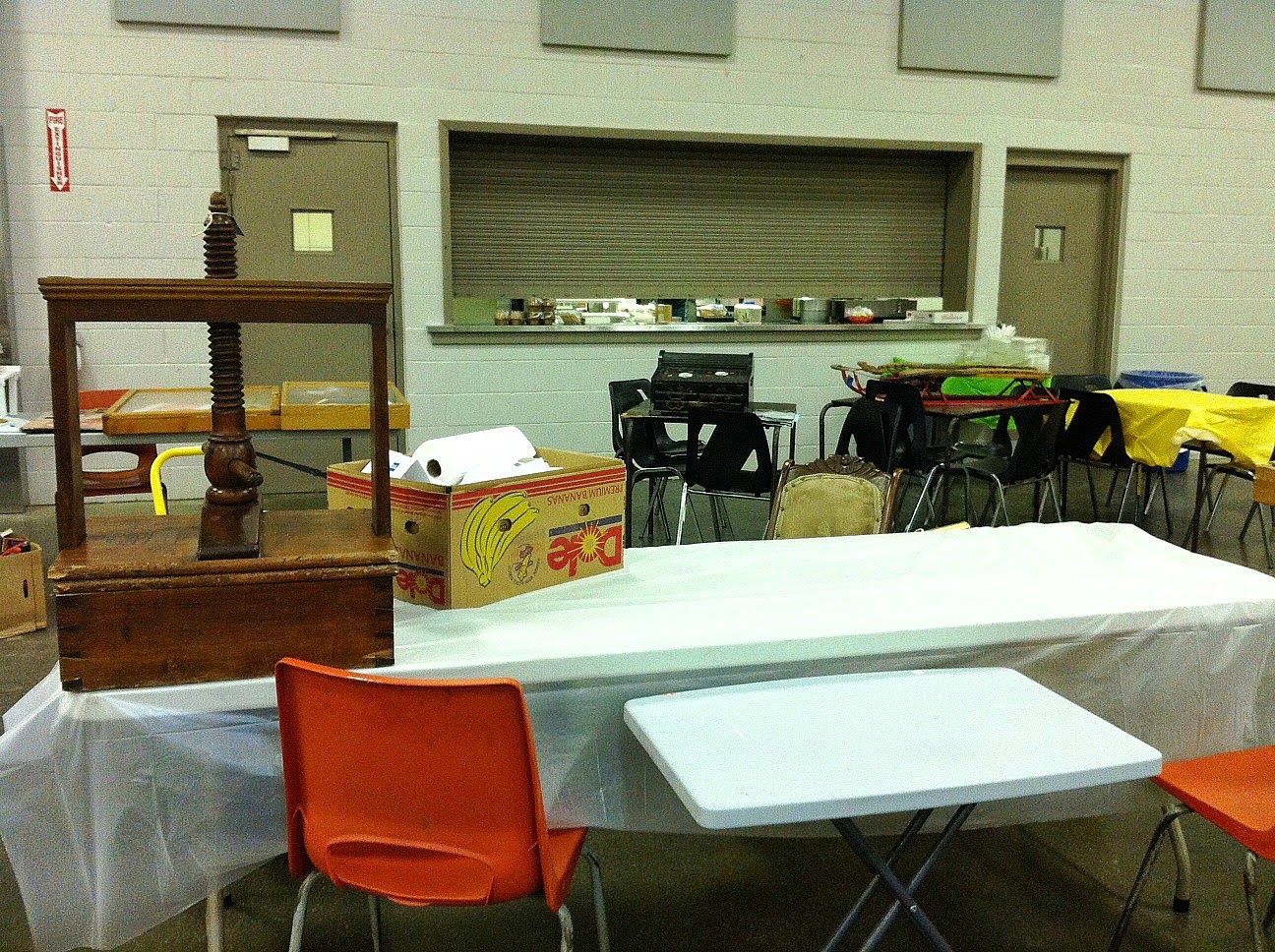 It's always handy for any type of show you do to bring a small folding table. Because no one was allowed to put things in the aisles in front of the tables, and Brenda had brought a small folding rocking chair, we turned the table 90 degrees and put the rocker up top. I used the dolly to prop up her huge framed painting. It turned out we were able to use the considerable space behind the table that we shared with other vendors. A lot of people made great and innovative use to gain extra display space. I had meant to go around and photograph all the different ideas, but ended up unable to leave the table. Next time.

8:15 a.m. Forgot my sales book with all the items written in it and drove home to get it. By the time I got back, Brenda had sold the wooden cart with washing machine legs to another vendor. It had been located underneath the table in that now empty spot for, oh, about five minutes. Still aren't anywhere sorted out on top. 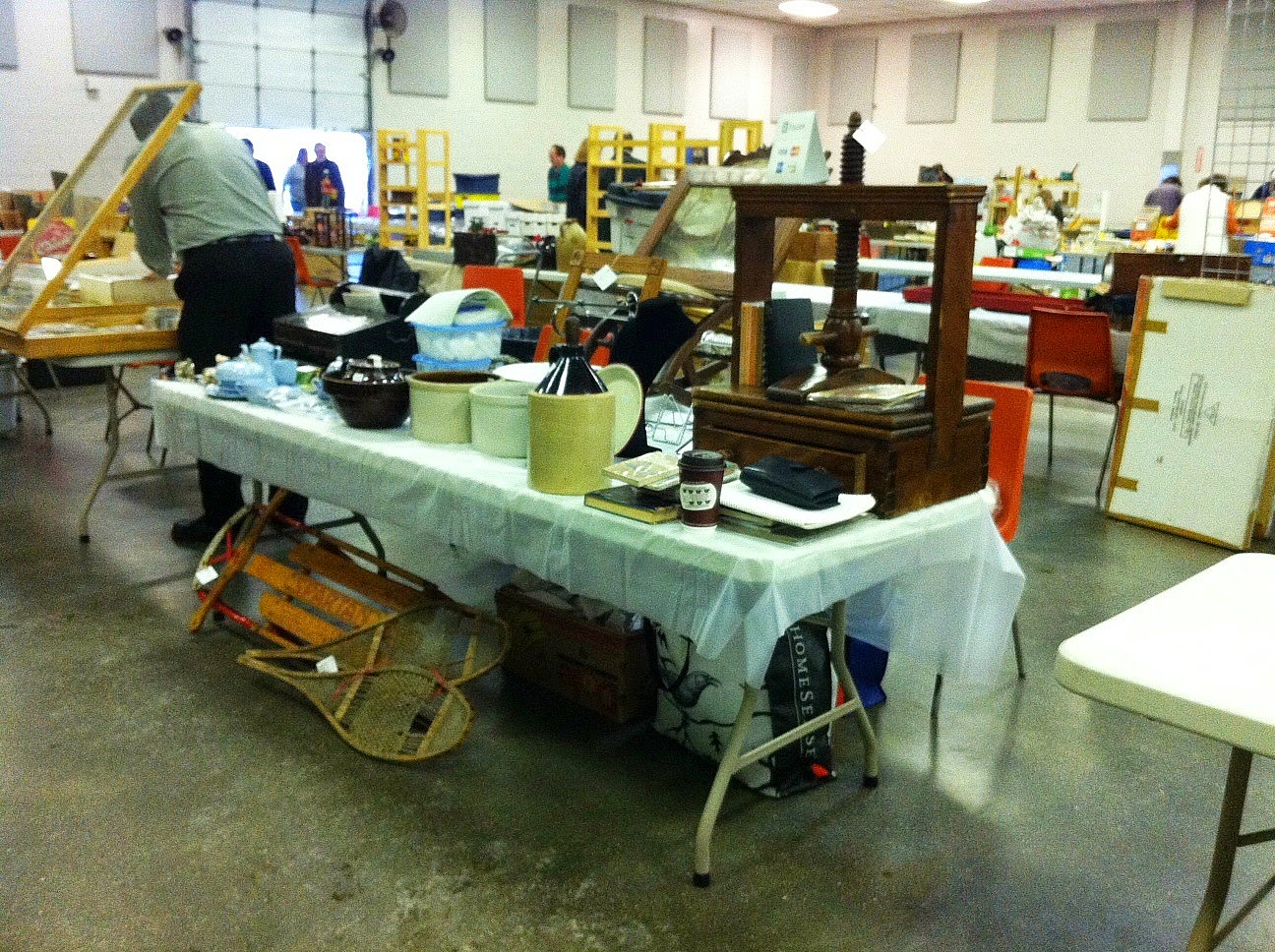 Moving things around, trying to group things and leave some visual breathing room -- something a lot of customers told us they appreciated -- and that we had different stuff from everyone else. 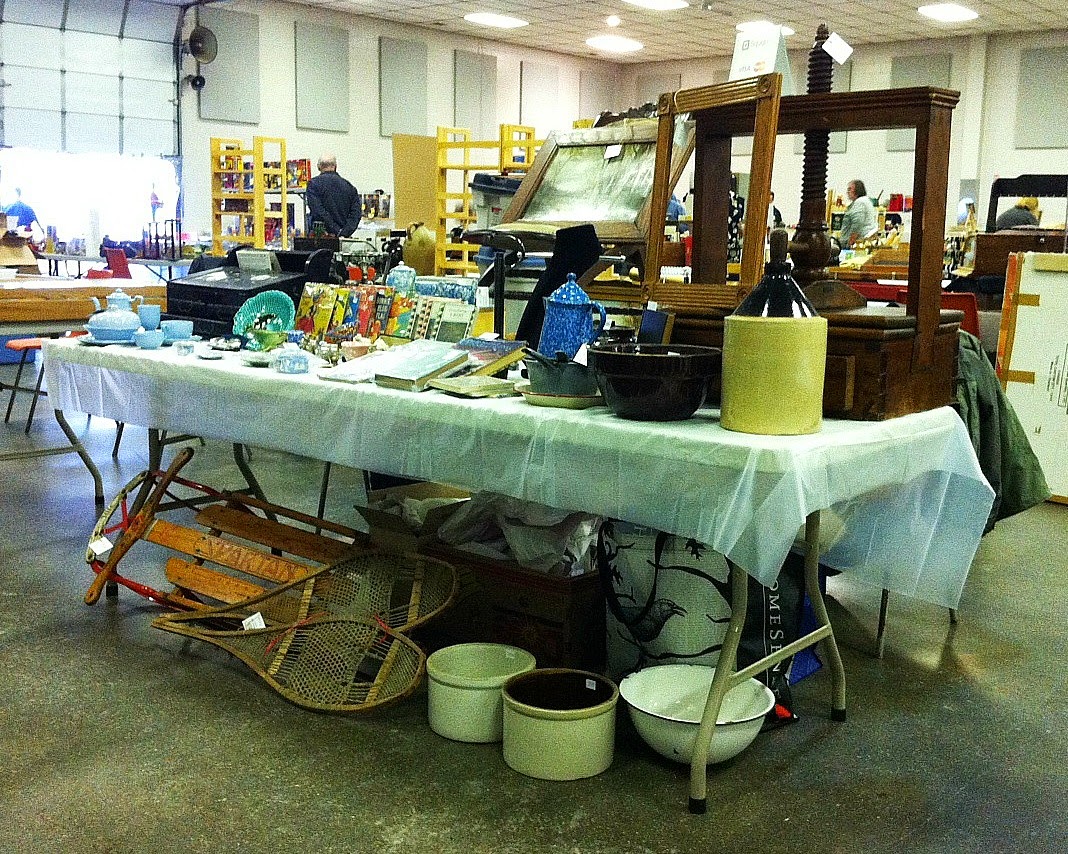 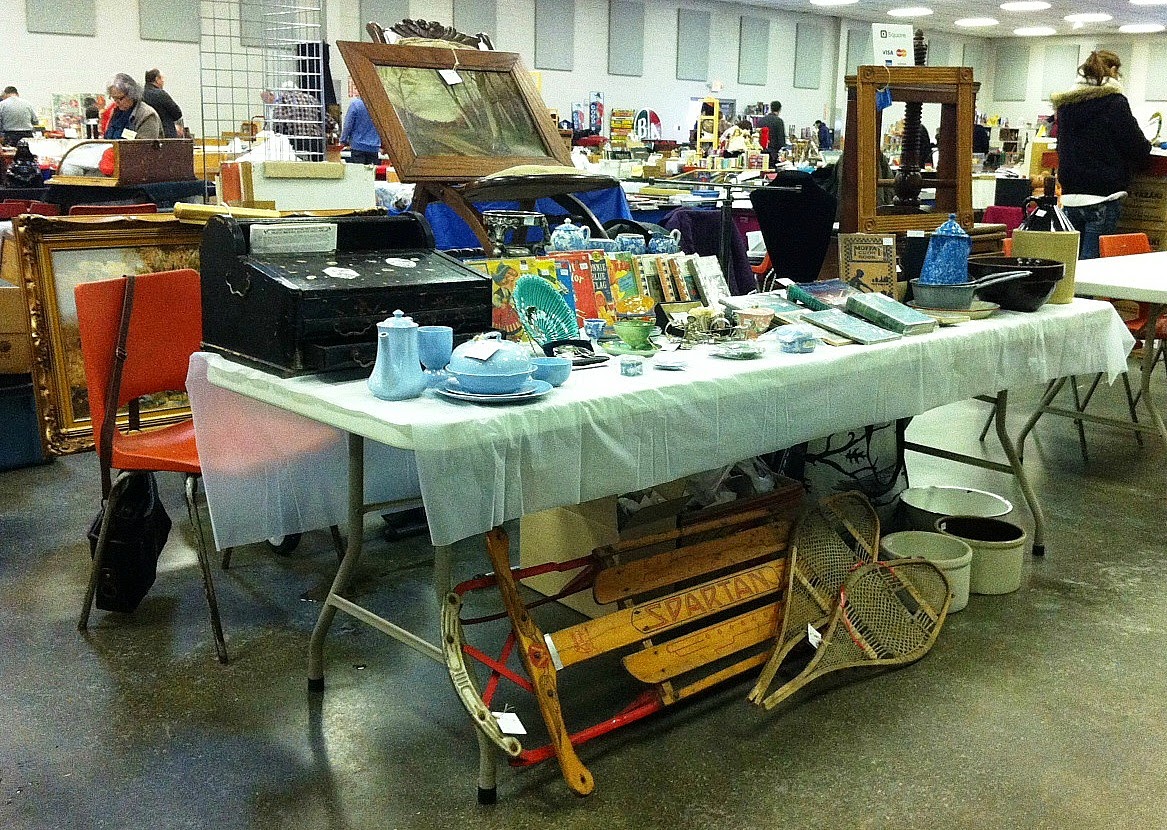 8:44 a.m. Sold the linen/book press to another vendor. 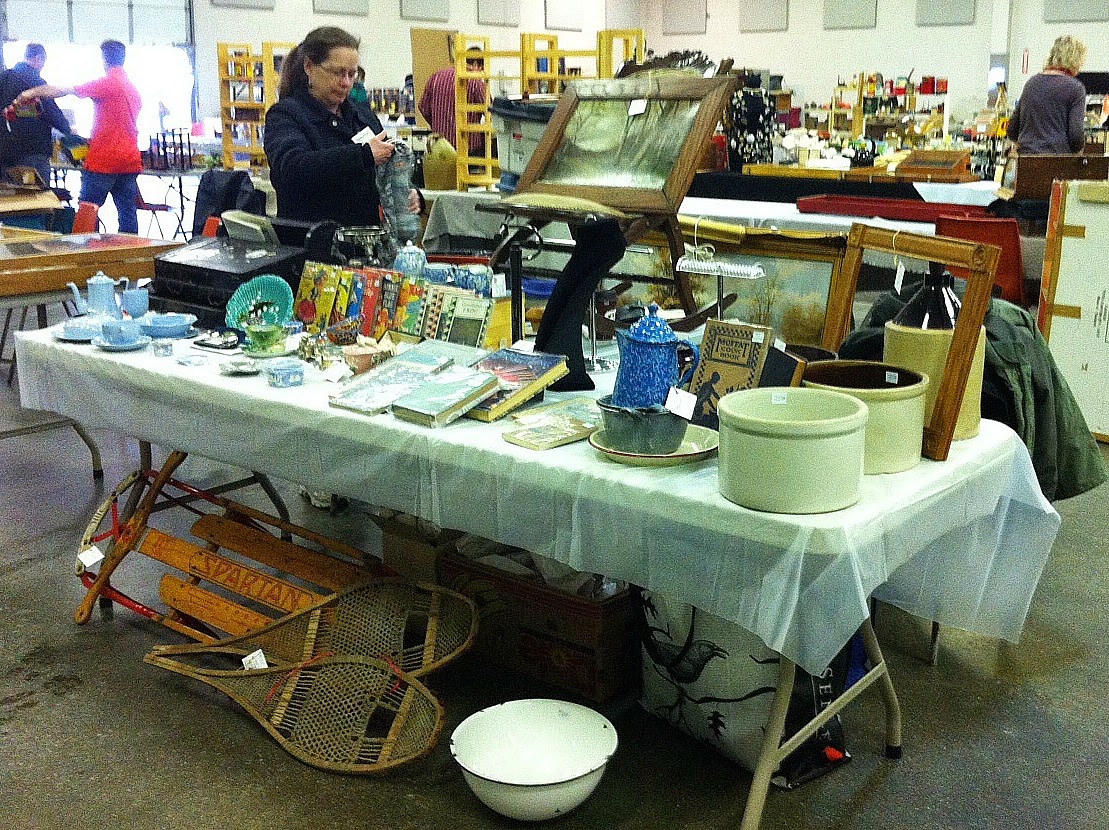 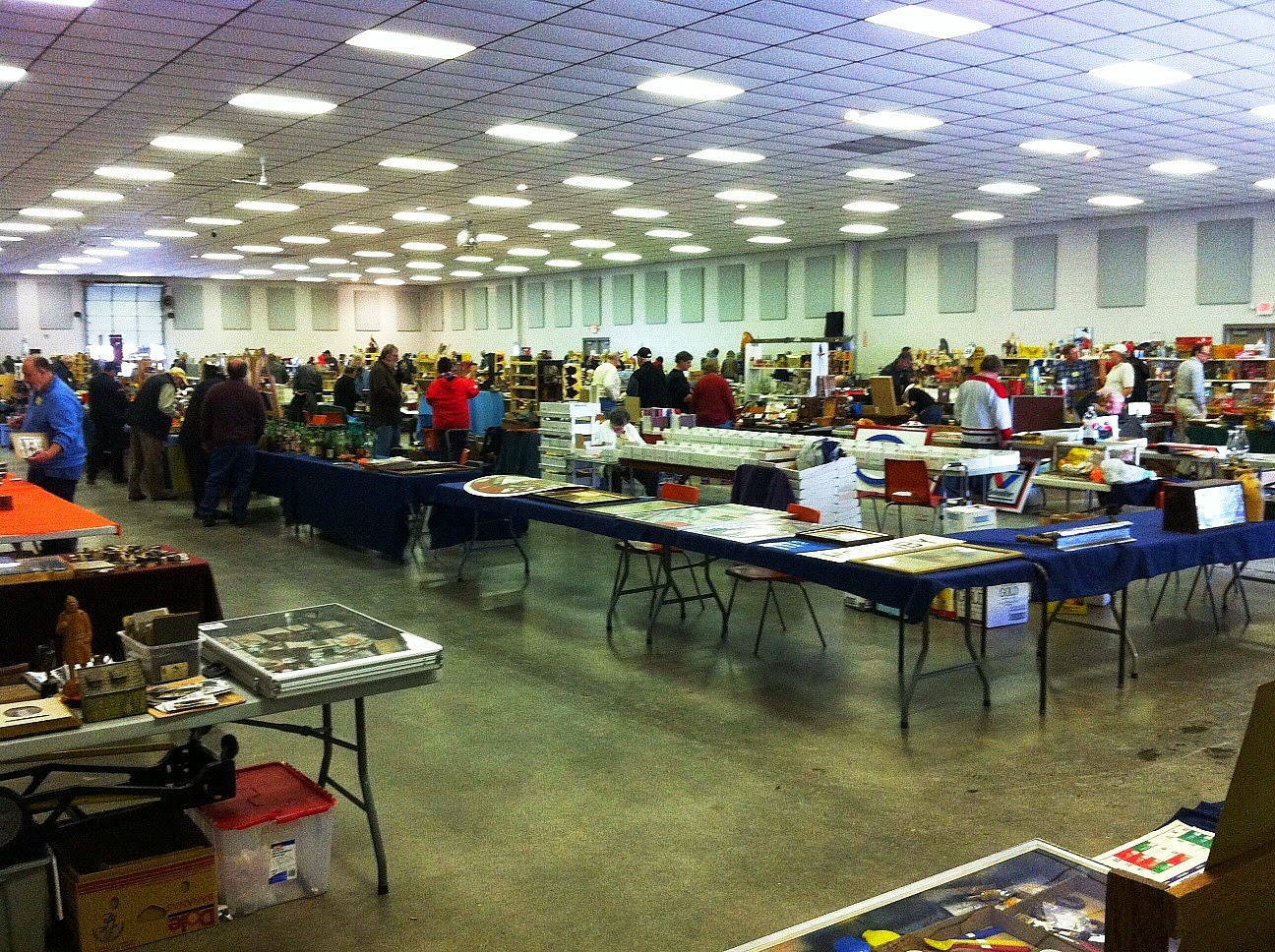 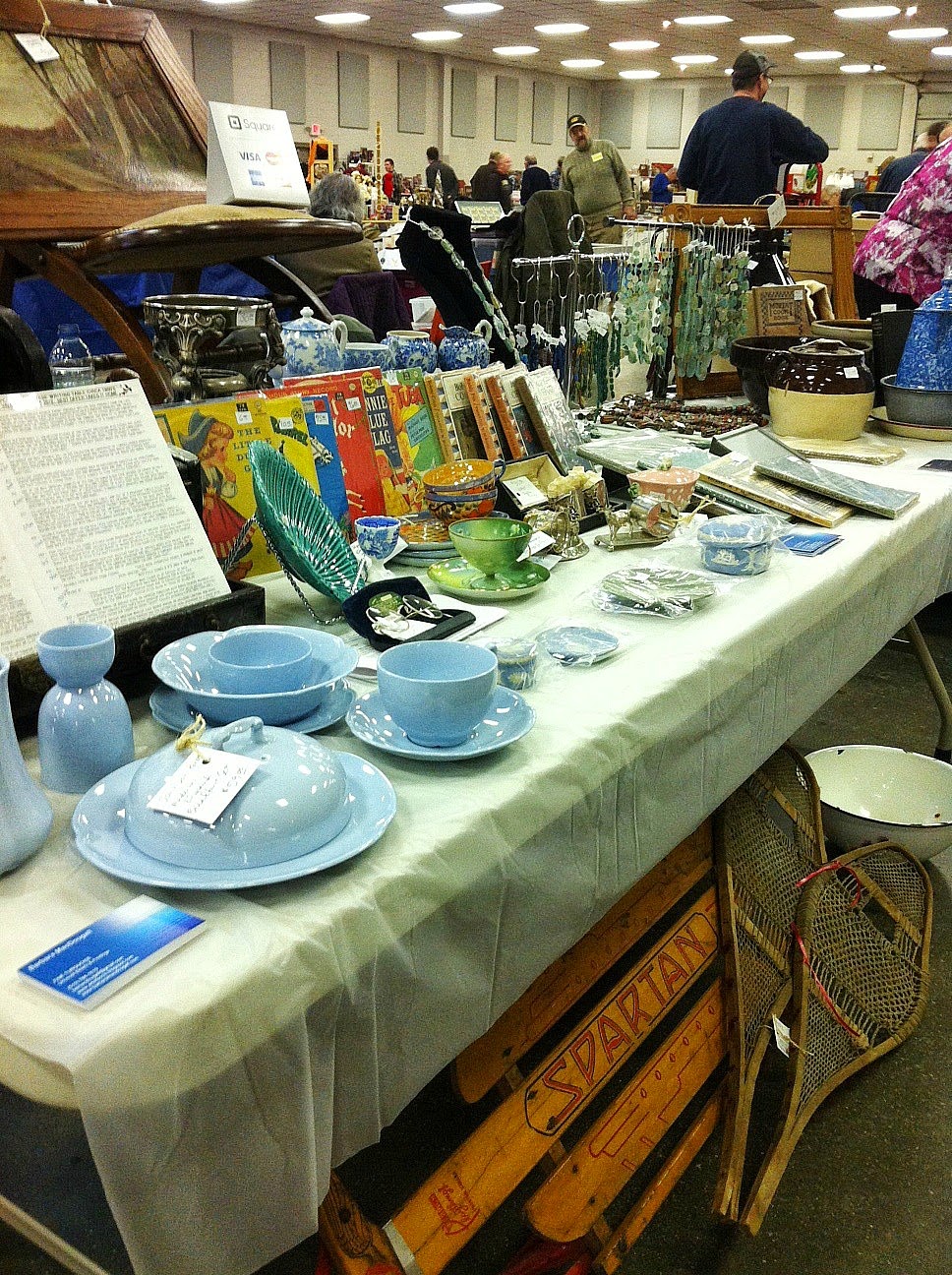 2:00 p.m. Almost gone. By this time, we -- okay, I -- had sampled several things they sold at the snack bar and just about mugged more than one person walking by with great mounds of those handcut french fries. Oh, my, they smelled so good! Brenda finally broke down and bought some and she shared. They tasted soooo good, and there's only about a quarter remaining of the original mound. 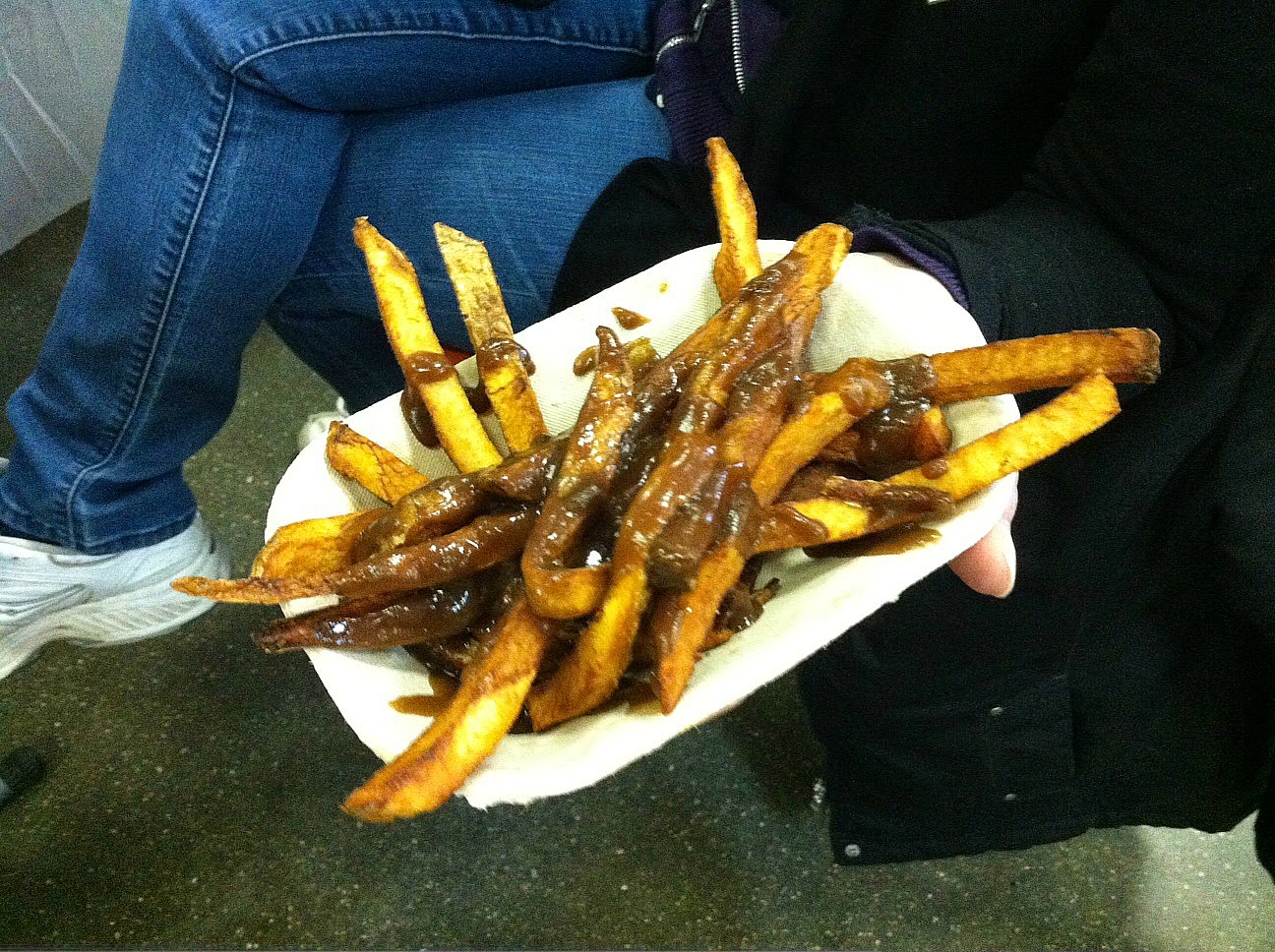 If anyone is contemplating doing a show of this type, here are some of the many things I've learned over the years, learned from vendors and noticed other vendors doing re setup and selection.

I brought my Square gizmo and had a Visa/MasterCard sign, but I didn't see anyone else with one. This is still primarily a cash business for most vendors and show-goers.

I brought a cheap plastic tablecloth from the dollar store to put on the table. Not a good idea if your stock consists of china or glass. Those plastic tables are hard, and the plastic tablecloth is slithery and slippery. Many vendors used something a lot thicker and cushiony like toweling or woven fabric bought off a bolt. Tables are normally eight feet long at these venues.

Everything for the shows comes out of labeled bins and goes back in labeled bins. Note to self: use LABELS.

I saw people stacking two empty bins close to each end of the eight-foot table which came up to about the table height and the bins were then straddled by a six-foot folding bench (just saw them at Canadian Tire). The whole edifice sat butt up against the back of their table for extra height and display. Very sturdy and non-tippy.

Other people had managed to acquire lightweight folding wooden slat shelves that were about four feet high and a foot deep with folding "wings". (Unfortunately, they are no longer to be found anywhere.) These were placed on top of tables and again were quite sturdy and non-tippy.

Pricing and Selling -- two different things, but interrelated. Always a hard one, pricing has more to do with your geographic and demographic than anything. You can put any price on something you want, but better at these one-off one-day shows to price a little on the low side, but also be prepared to tell someone who's dithering you're open to offers. Always put prices on your items that can be clearly seen. Browsers will NOT ask. You're sitting at your own table with maybe 20 or 30 items, but the customers are looking at thousands upon thousands of items and it all becomes a blur. They say they'll come back, but they never do.

Demographically, this show skewed older. My customers were 30s to 50s.

Always give yourself some wiggle room. You buy something for $2, a book, say, which you looked up online, and you see similar items have sold for $10 to $15 on eBay or Amazon, plus shipping. If you're only there one day, you don't want to be taking that book home. So you price it at $10. A decent return is around 3 times the price you paid. But you don't want to give it away, either. Someone will offer $5, you say $8... they might go for that, or you'll both agree on $7.50. Maybe you have three or four books, or someone is interested in a number of different items. What will you take for the lot? Remember, you don't want to take them home. Have your lowest price firmly in your mind so you don't get blindsided by someone asking for a deal.

Vendors. There are two types of vendors, the ones who have been doing this for years and are always buying and selling stuff and they're at all the shows, more often than not with three or four or more tables. Many of them also have standalone stores or booths at various antique malls. Yes, they want to sell, but they can afford to sit on their stuff and wait for someone to come along to pay the asking price.

Then there are the day vendors, like me and the lady next to us who've signed up for one show in the hope of getting rid of a pile of stuff.

What happens at these shows is the big vendors all walk around during setup and they'll stop you in your tracks to ask about an item on your dolly as you come through the big rollup doors. You'll have noted above that I sold two large items well before the show started; in fact, well before we'd even got the table arranged. I've done other shows before and I know how this works. They are looking for fresh stock for their stores/booths and they need to buy low to have a decent markup. My press was marked at $500. If it was in pristine condition it would've been $1,200. Unfortunately, many years ago a dog snacked on it where I'd had it stored so there went any value.

I can't tell you the number of vendors who came by to look at that press as soon as I walked through the doors. One of the vendors kept coming back and finally he made an offer. He really low-balled it. I already had a price in mind if a customer made an offer, but for this guy I came down another $90 just to get rid of it -- remember, I did not want to take it home, and more likely than not it would've sat there all day on my table, because $500 for something like that...? Realistically, there aren't too many people who'd be seriously interested in the item itself, let alone be prepared to pay that much money. This guy not only knew what it was, he told me he was going to use it and also had the wherewithal to fix it up -- and eventually he'll sell it in his store.

What else...? Bring snacks or go broke buying hotdogs, peameal & cheese on a bun, hamburgers -- and those infernal chips -- and coffee; bring water; bring a friend (bribe them with free admission and a vendor tag) so you can take breaks and go wander around.

How did I do? Well... except for the two big items which were gravy, I made my table ($55) and a few dollars extra. Sold four kids books for a friend, a couple of my own books, and some Padre beads. That was it. None of the china sold, none of the stoneware, none of the enamelware... none of the frames even got a look, and while people thought the sled was pretty cool, nobody was interested. Weird, because these are all items that sell at the Antique Mall. Hmmmm. Gotta rethink this a bit, yes? Were my prices too high? Possibly. But they were no higher than anyone else's. Did they sell their items? Mmmm.... not sure.

Meanwhile, back at the ranch, I'm in the final throes of pricing and packing beads for The Gem Expo in Toronto this Friday, Saturday and Sunday, March 13th, 14th and 15th, at the Hyatt Regency Hotel ballroom on King Street. We are promised beeeeyoooteeful weather. FINALLY! Above freezing! Sun!!!!
Go to the website, sign up for the newsletter and get discount coupons. Free admission for the whole weekend if you sign up for classes. Lots of pictures, stories, vendor profiles and show updates here.

Look forward to seeing you there!