Thursday was a gloriously sunny day to drive to Toronto and hang out. In fact, the whole weekend was pretty nice, if a bit bitter-windy at times. But after such a stinking cold winter, any day above freezing is a gift. 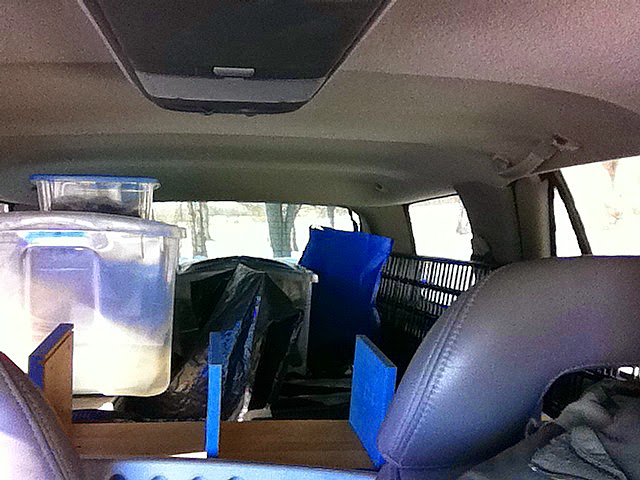 While I ended up leaving home an hour later than I'd planned, the drive to Toronto was fast and easy-peasy. Very light traffic on the QEW/Gardiner. Guess everyone in Toronto must've left early for March Break. I had to laugh, though -- just before the turnoff onto the Lakeshore, I saw two clowns both pulled over for speeding. Something about sun, dry pavement, light traffic... brings out the idiots who believe driving is just another video game.

I found plenty of parking spots downtown and I even found a new secret parking spot safe from the tow trucks at rush hour because I can't get into the Hyatt parking lot until after 6:00 p.m. Ten bucks overnight parking beats some obscene half-hourly parking rate up until then.

Once I got to Toronto, I went to Arton on Queen West for colourful gauze bags for one of my vendor pals at the market (can't get anything remotely like these in pokey little Woodstock), then parked over on Mutual Street, safe from any mid-afternoon tow truck predation. Picked up a map of Tibet at Open Air Books & Maps and continued walking to the Strath to check in, marveling at the dearth of people on the streets. Where on earth have they all gone??? On getting into my room on the 2nd floor, I discovered I was directly above a live band tuning up who would be playing that evening. Uh... I don't think so. Hiked myself back down to the front desk and they very kindly moved me up to the 7th floor, where for the first time I had a room with a view over York Street instead of a restaurant vent.

On the way back I stopped in at Lacy's to buy more Stretch Magic, which of course were all on back-order, but I was able to get tall skinny bags for Chris the Honey Guy's organic herbs that he's growing this spring and summer. Wandered around the St. Lawrence Market and bought chocolate-covered candied ginger, which believe it or not is a great brain zapper when you're really flagging. My early dinner was simple steamed rice with a squirt of sriracha and a spring roll. Yikes. Less than $4.00 and I was stuffed. 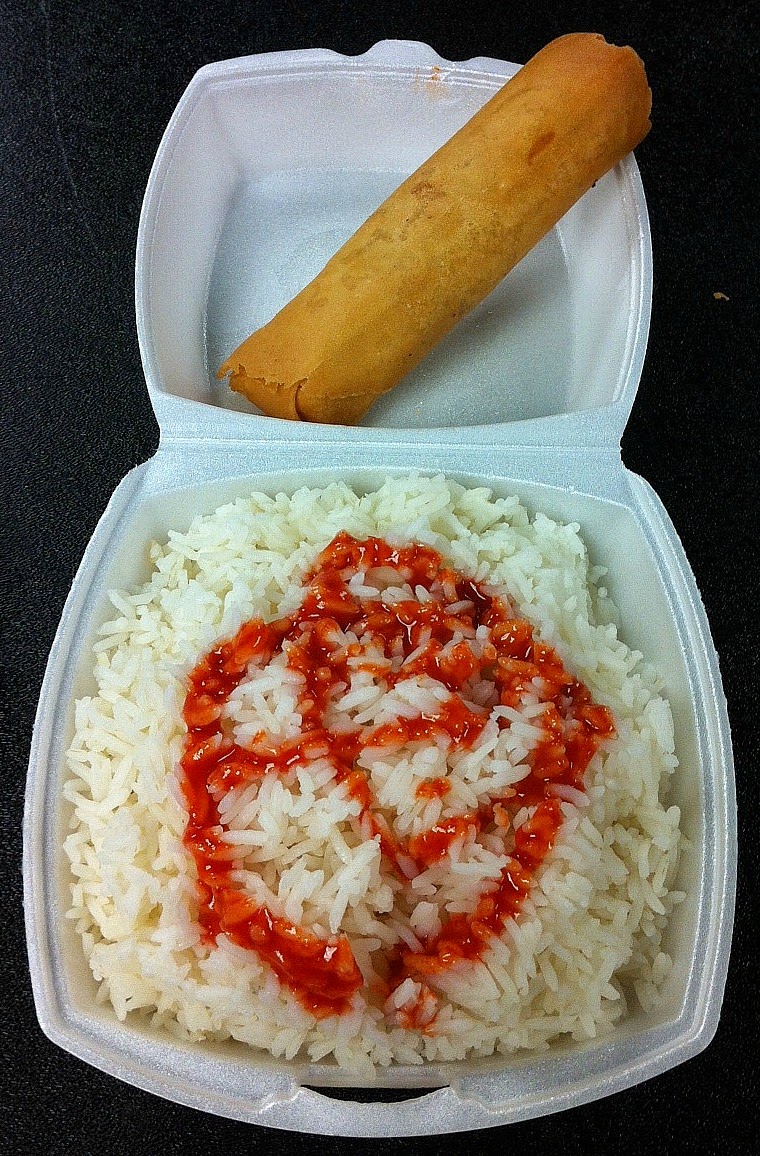 Killed some time people-watching from my free parking spot on Mutual Street and got to the Hyatt just after 7:00 to unload and start setting up.

Remember ol' JD? He's still hangin' by the escalator in the Hyatt lobby. Get a life already. 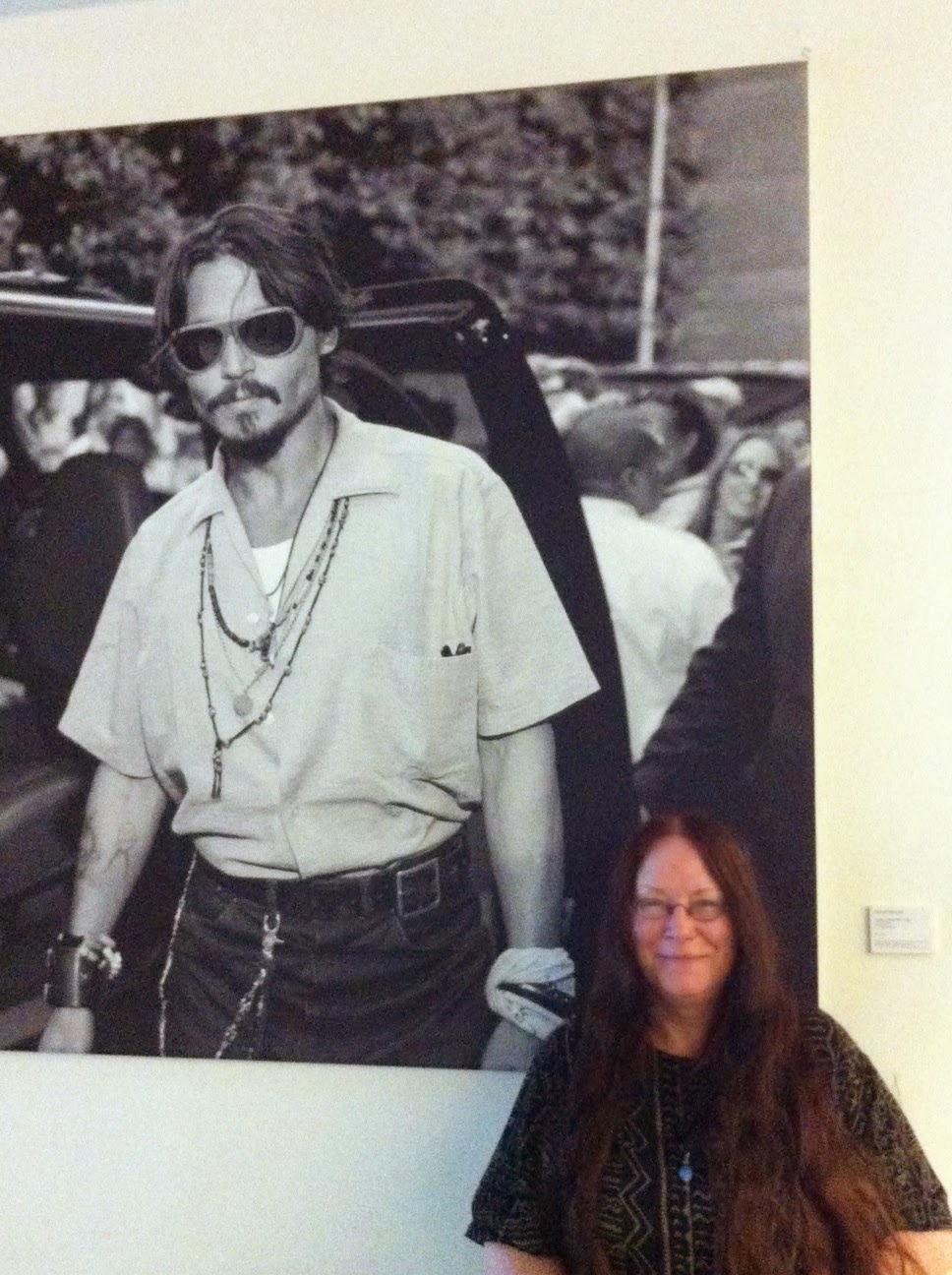 Found my table this time far off in the back left corner, which I personally quite liked. This way, with my back against the wall versus back against the whole room, every time I glanced up I could see the whole ballroom, except for the pesky pillars everywhere. Only problem being that far from the front door was that by the time many people found me they were already broke -- and heartbroken -- when they saw all my goodies. Oh, well... next time they'll come looking for me first, right? 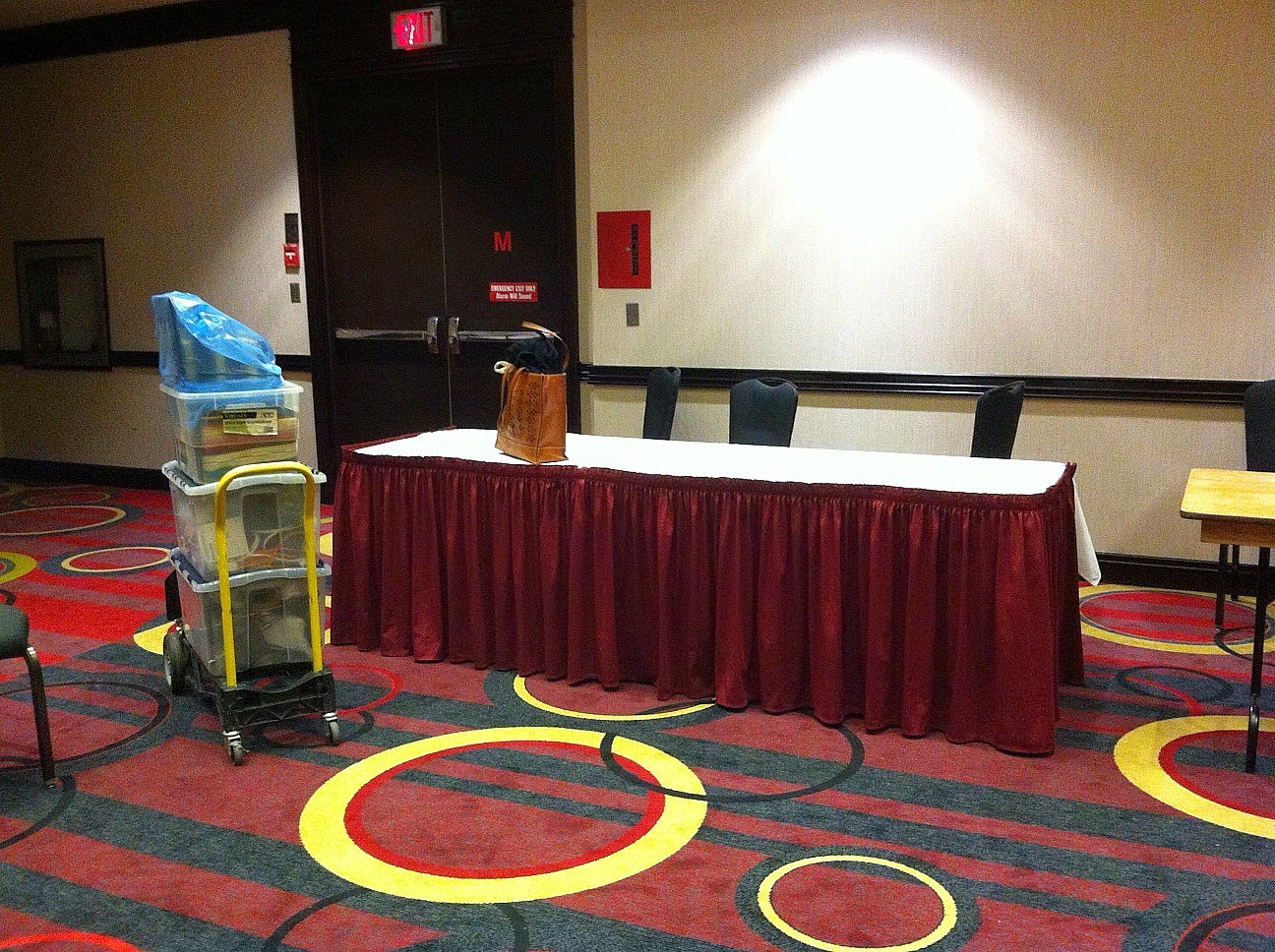 Isn't that the pukiest carpet you've ever seen in your life?

Okay, time to unload the truck. Lovelovelove my dolly. First thing is to dig out are the bed risers, to raise the table height. Notice how the table is now magically levitating? Next, get the grids set up. The back table edge is four feet from the wall, perfect to fit two grids edge to edge, then the third grid goes in line along the end of the table, and one grid comes in behind the table. Kind of a wonky T formation. I use plastic cable ties to tie them together. Just don't snug them too tightly or you'll never get your pliers in far enough to cut them apart when you have to take everything down. I have two triangular grid pieces that set into the inside angle up top and just above table height for stability, under which I'll set up my little folding work table perpendicular to and between the main table and the wall. 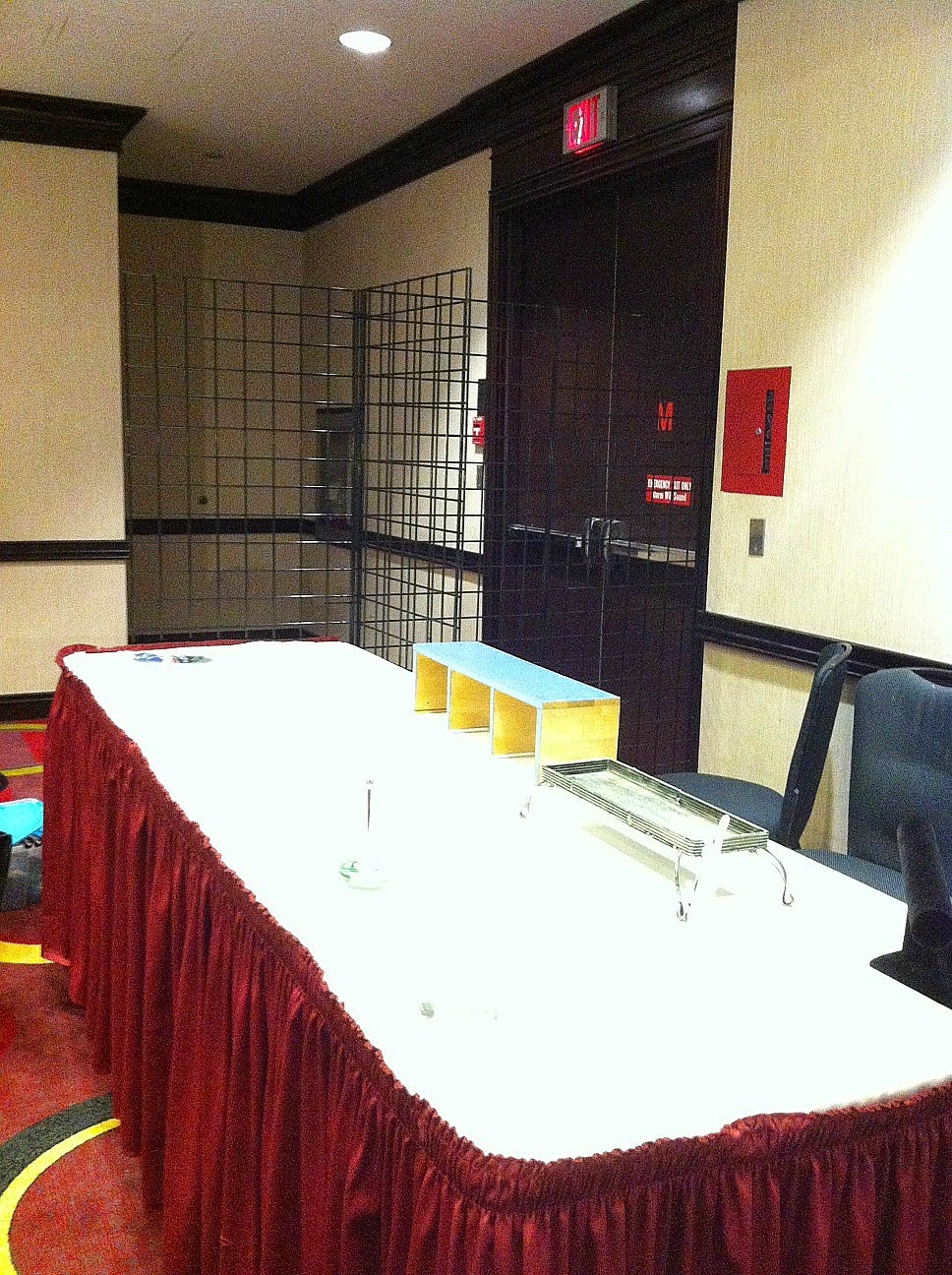 Got the lights up and checked that all the bulbs work. There's a Shoppers Drug Mart on the corner across from the hotel open until midnight every day, so anything needed after this point can easily be sourced there.

I have to say, though, that those stupid spiral bulbs produce an awful light. I almost lost a couple of sales because the beads looked dead under them -- and that's a quote from one of my customers. I showed her what the beads looked like under the regular warm light bulbs and she was happy and bought the beads, but it really makes me wonder now just how many sales I may have lost.

Started loading the curtain rods and filling the grids. 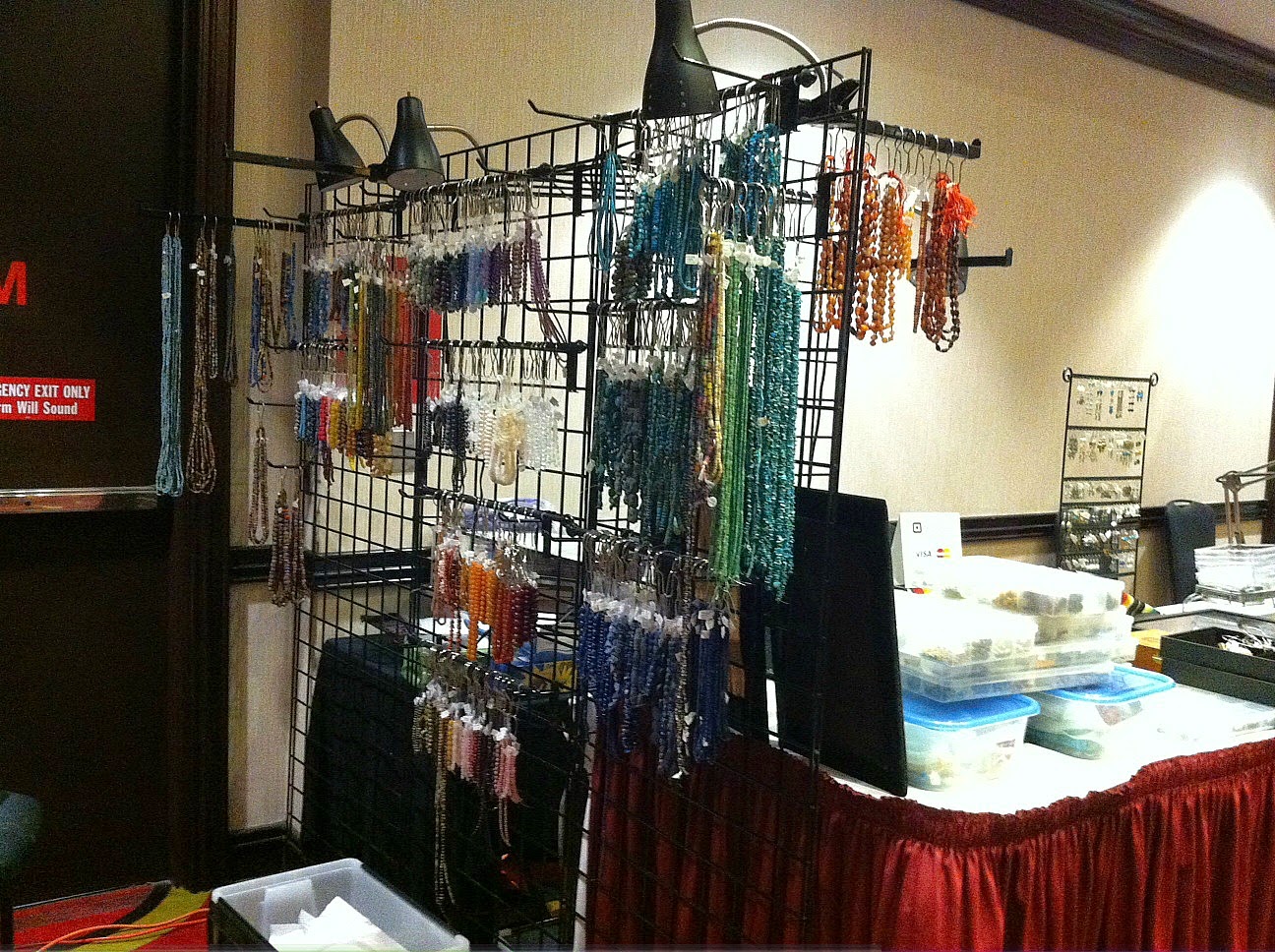 This far into the setup took about 2-1/2 hours and was about as much as I could accomplish that night. I desperately needed to sit down and was looking forward to my allotted half pint of ice cold Alexander Keith's... Strath, here I come. 10:59 p.m. Just made last call. Whew! 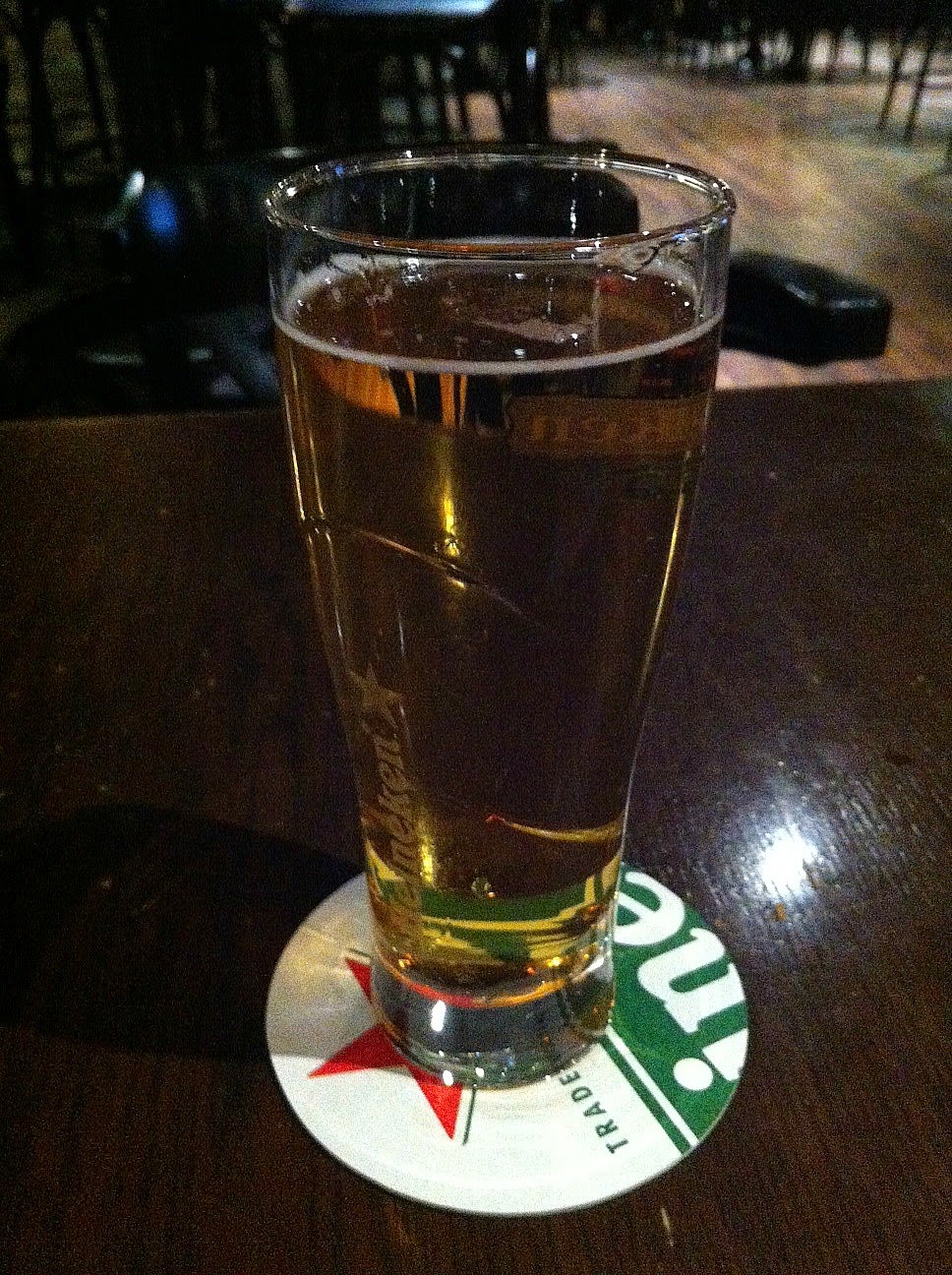 Friday morning: The ballroom was going to be open at 7:00 a.m. for setup. The show opens at 11:30 on Fridays and goes until 8:00 p.m., a very, very long day I knew I'd be spending mostly on my feet so I stopped for my usual Friday morning breakfast at Dunn's, a couple of blocks east of the Hyatt on King Street. I'm a complete sucker for the whole bacon, eggs, homefries, toast and coffee breakfast. Saturdays and Sundays, Dunn's doesn't offer the $4.99 breakfast special so I make do at Tim's a block away. But I do like Tim's cappuccino, so not a total hardship. 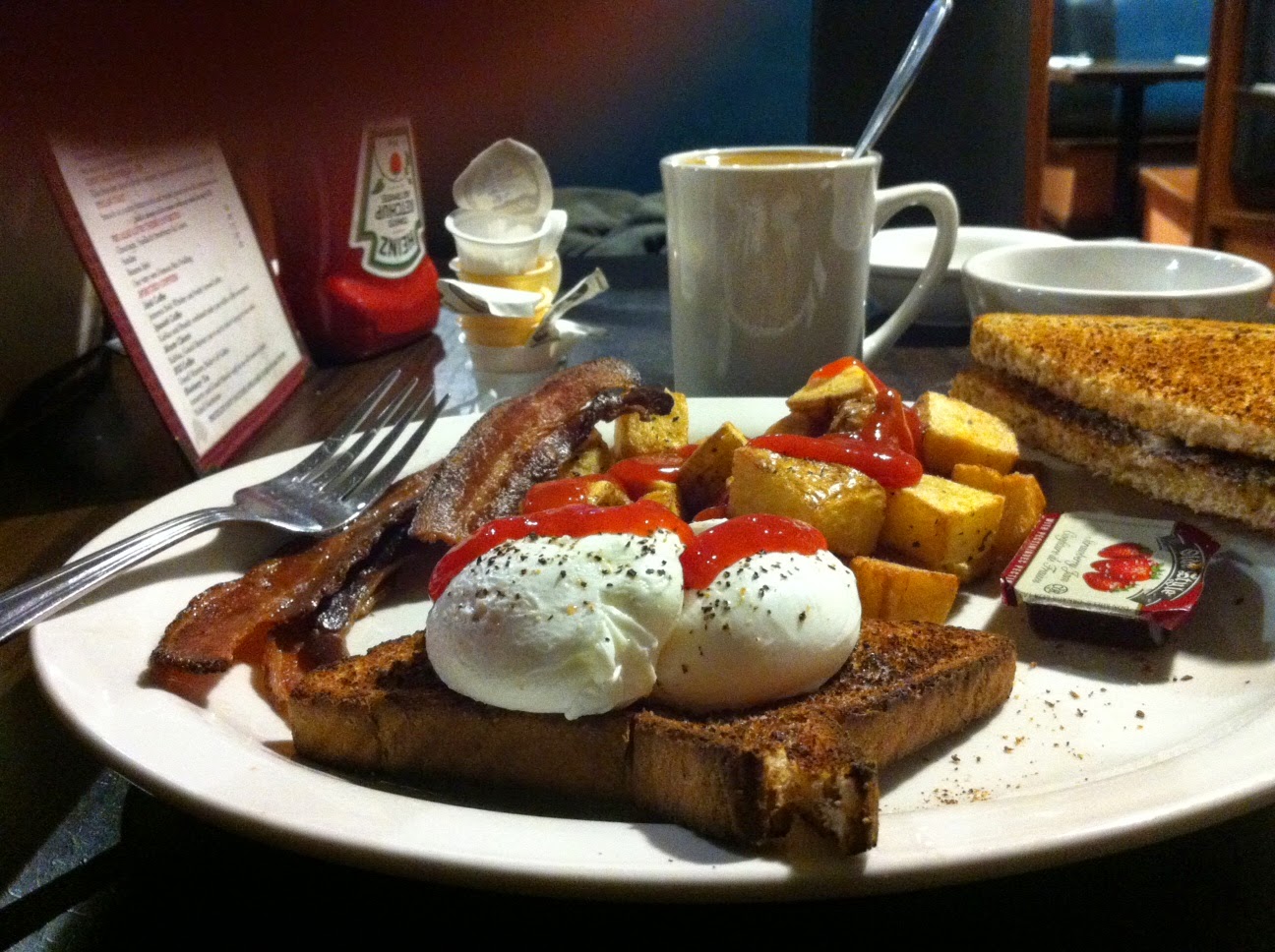 Got to the ballroom around 8 or so, finished sorting the beads on the grids and started in on the table surface. I was still fiddling and fine-tuning when the show started. 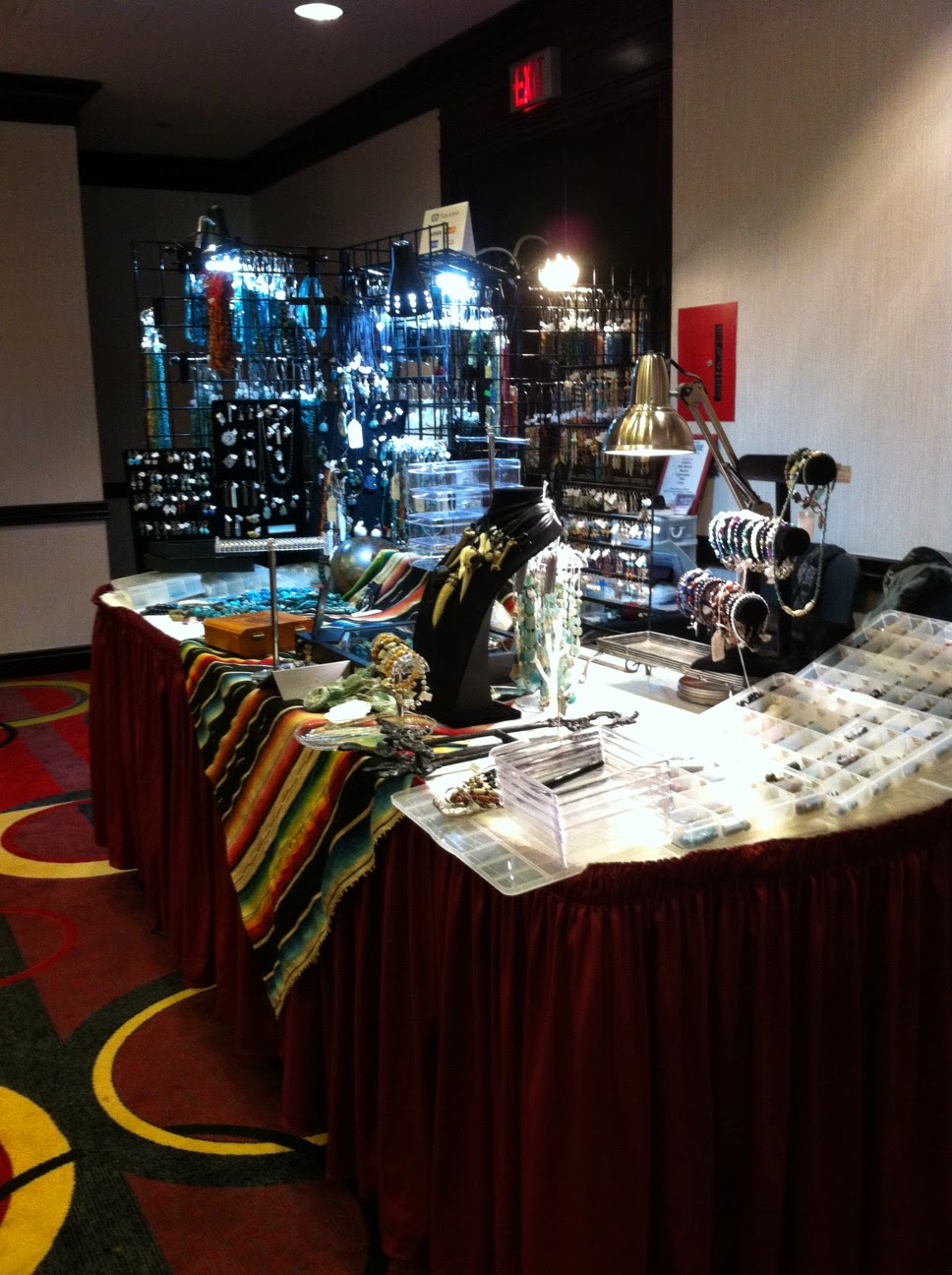 See those clear plastic boxes in the middle? They're not only divided, they have lids, and are also great as risers set here and there. Got them at Winners. Just to the left of them are turquoise strings on a clear plastic T bar with ridges to separate each string out evenly. I get those at Winners, as well. Any ambient light seems to glow and refract through them and whatever you put on the clear plastic boxes or T bars appears to float. 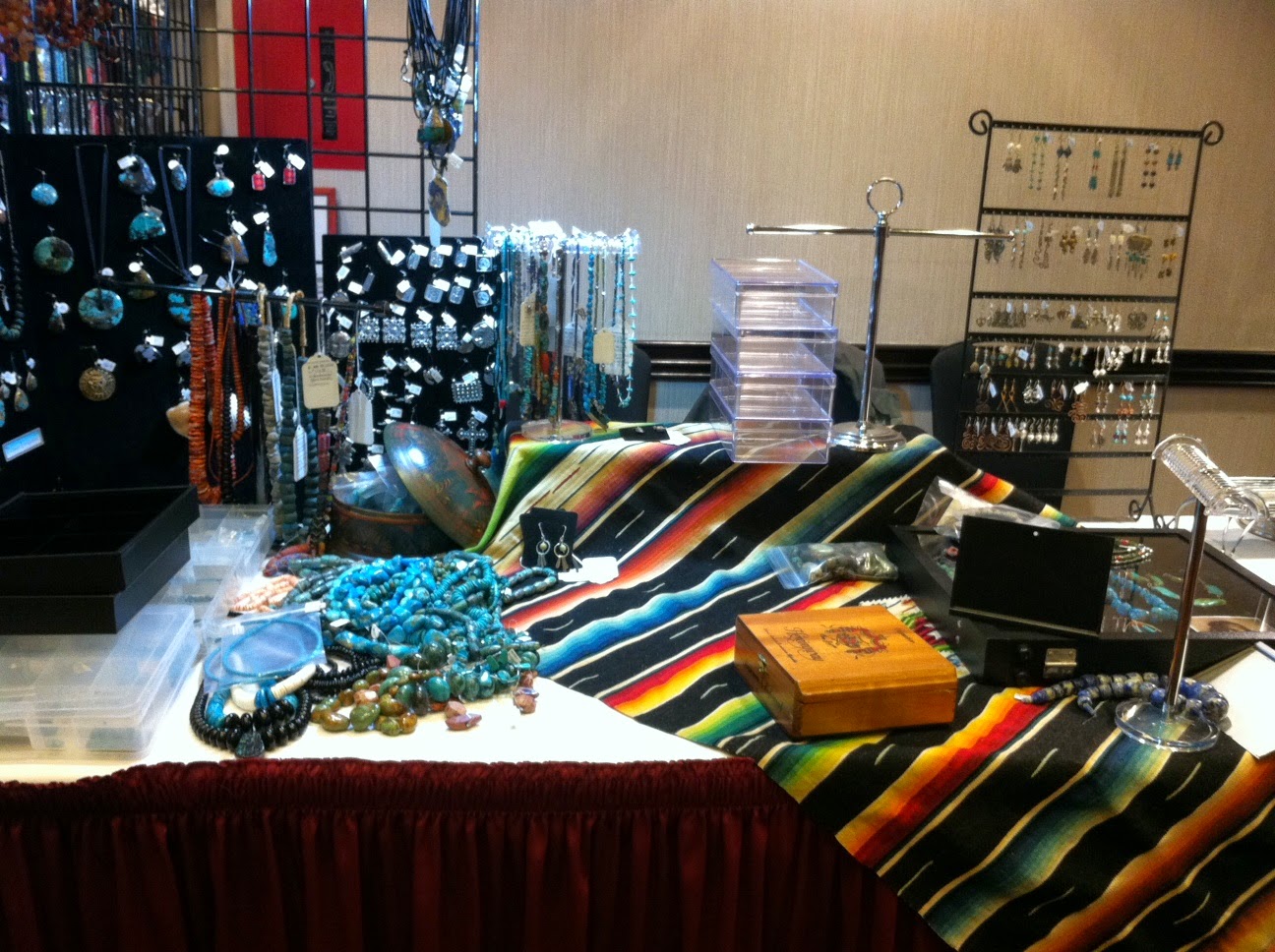 Sold lots of skulls this show. And earrings -- what was with that? They flew off the table. 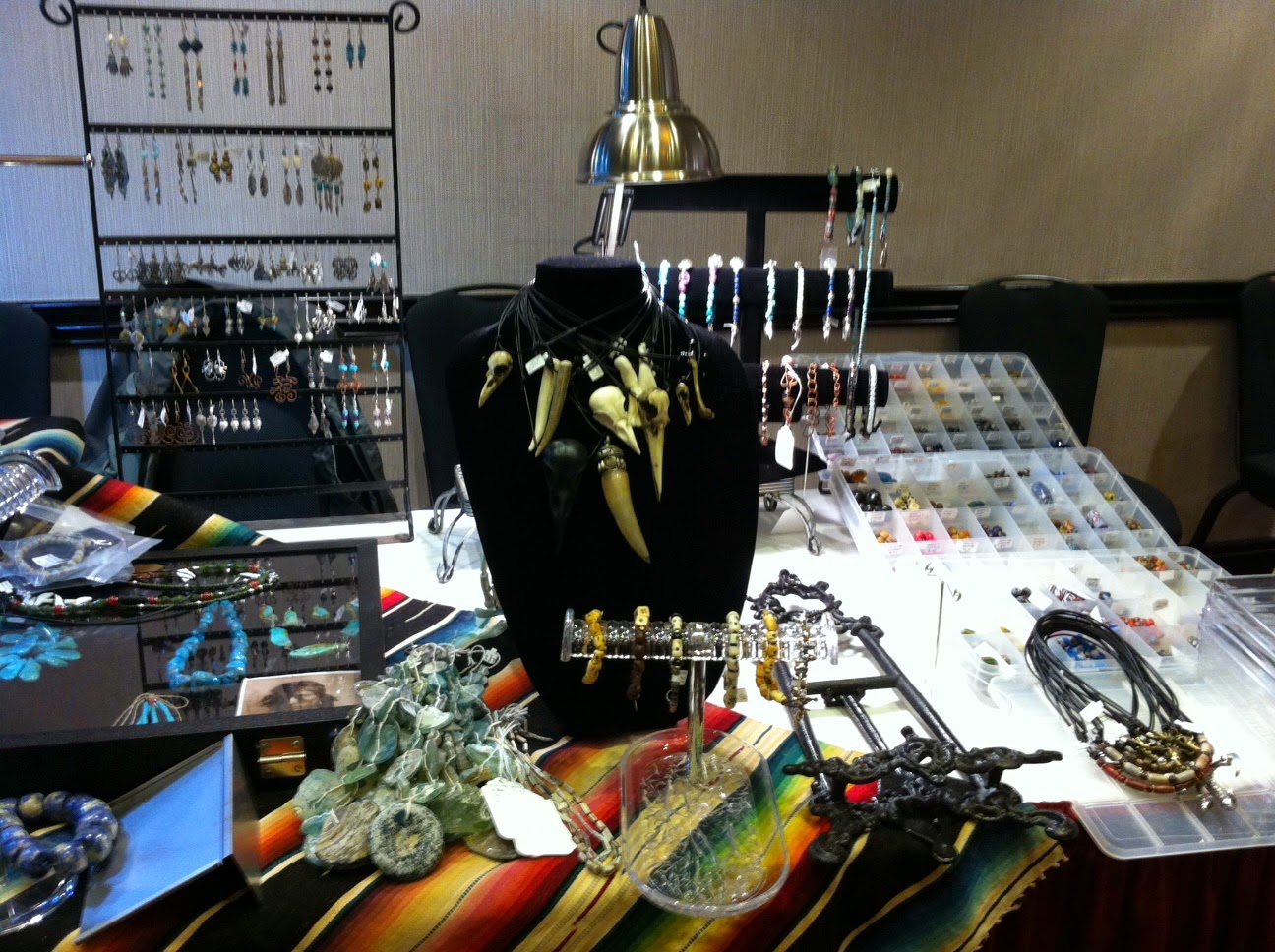 Many thanks to all my return customers -- and new ones -- and especially thanks to JR, a veteran market vendor herself who knows what we really go through doing these events, and who brought us a box of organic strawberries, which were soooo juicy and refreshing.

Friday night, Ruth and I went to the Strath Pub for dinner and split an order of fish and chips. She had an absolutely perfect and perfectly hot hot Caesar. Oh, my. I think next time I'm going to have me one of those. Saturday night, we went to Kama -- Classical Indian Cuisine, a block east of the Royal Alexandra Theatre, which serves a really good buffet and it is not at all expensive.

Saturday morning I took this picture on the way to the Hyatt: 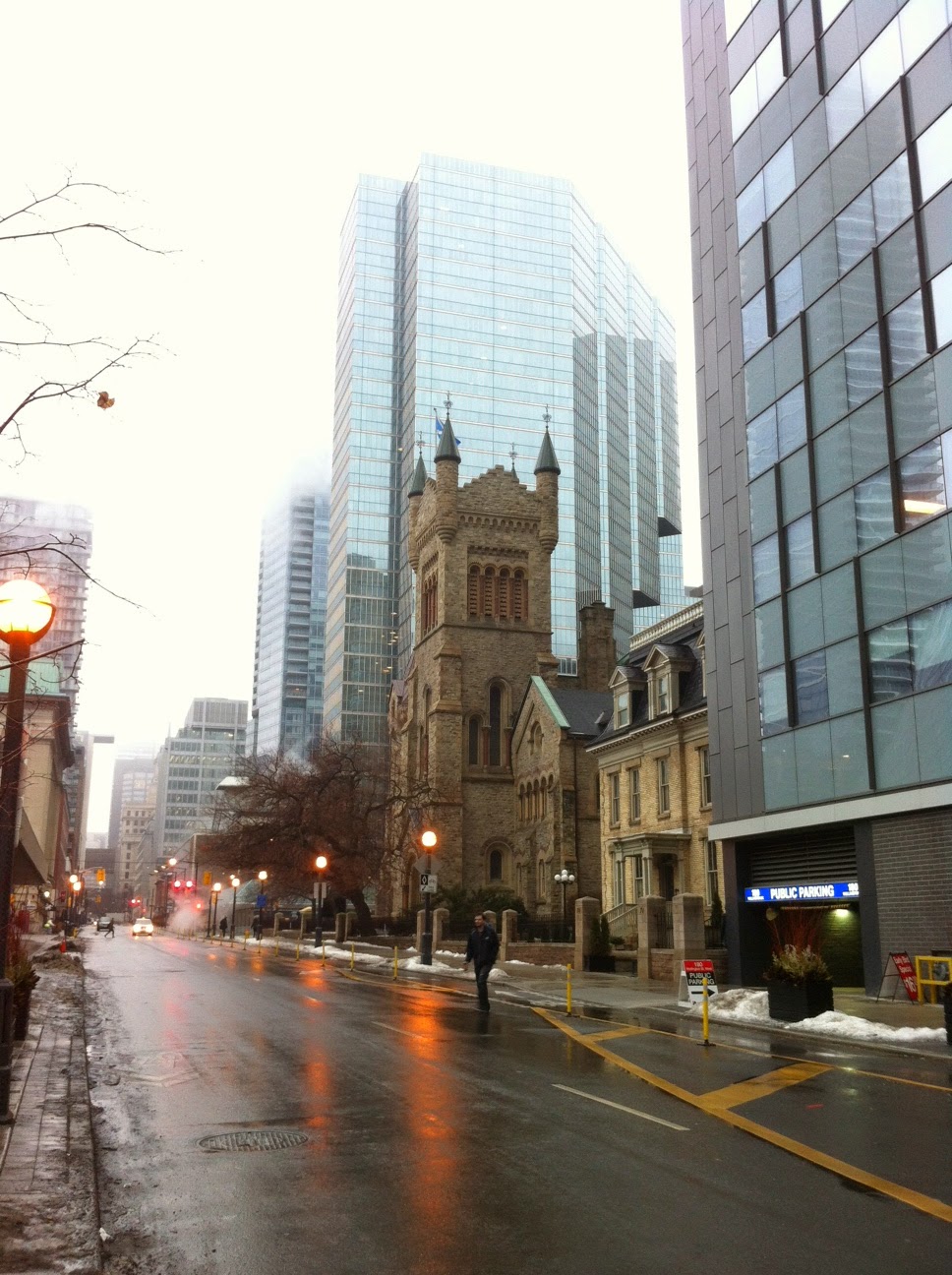 And that's it for my show pictures this time.

At the July 2014 Gem Expo I'd sold one of my Kingman turquoise hearts to Debbie Benninger of ID Jewelry Design, and her sterling silver wire-wrapped piece sold at this show!!! 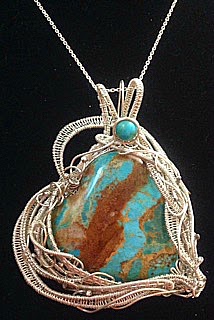 For anyone interested, I still have two or three more of these Kingman turquoise heart cabs. They are spectacular. Email me for availability and pictures.

Meanwhile back in the real world, I had shipped a bracelet to Brooklyn, NY, the day before I left for the show. Unbelievably, Brad got it on Monday. FOUR days to the US. He's a very happy camper and I was so relieved, A, that he likes it, and B, that it fit him:

Hi Barbara,
I got the bracelet today looks amazing and fits perfectly! Thank you again! I really like it a lot. I'll be sure to pass your card along to anyone who asks about it.
Best,
-Brad. 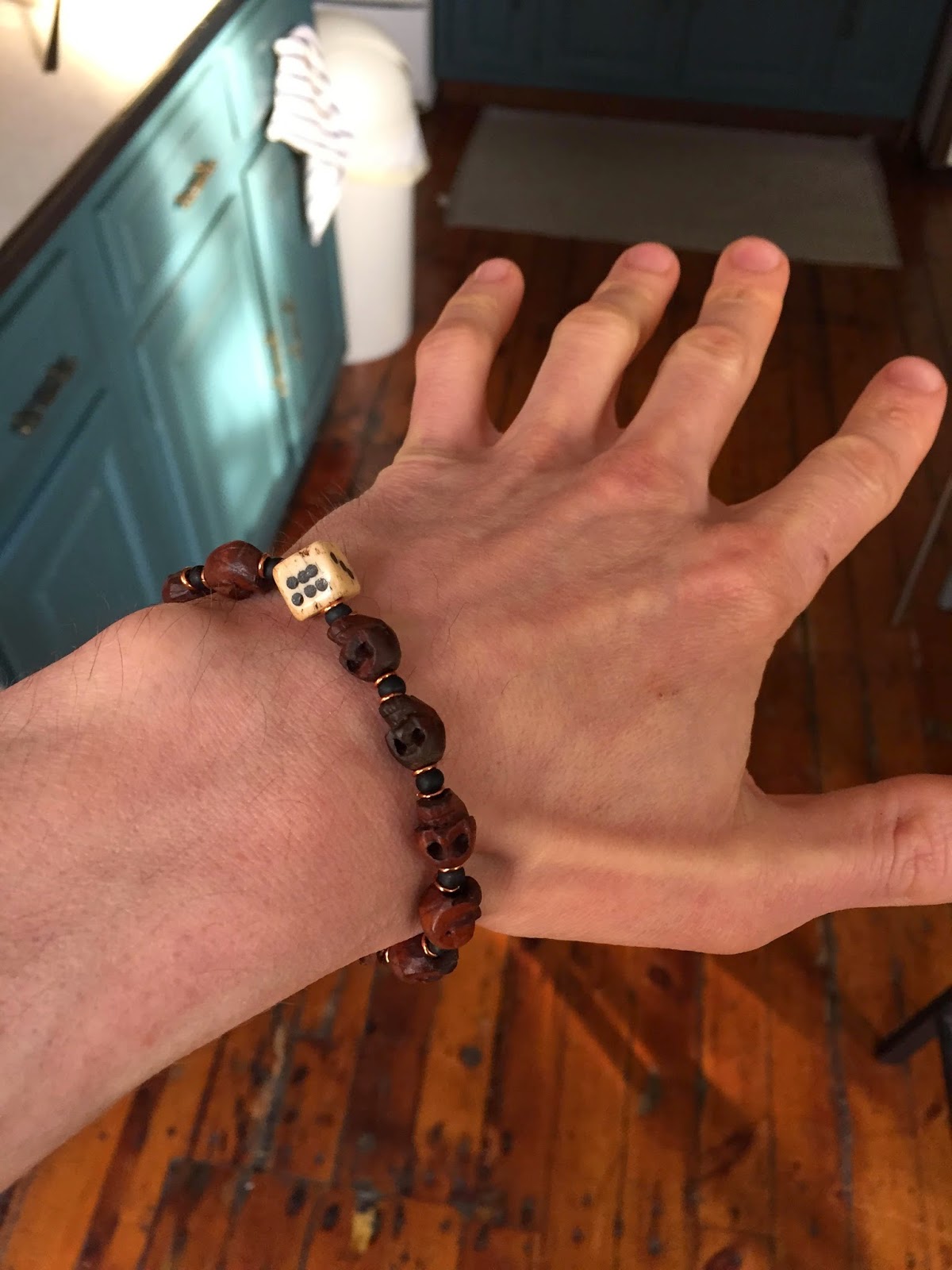