...and I'm gonna be sorreee... no sitting out on the deck beading for me early in the morning or later on in the afternoon when it's shady, breezy and cool these next two weeks or so. Sigh...

On the other hand, I could have put an empty coffee cup on the lamp to discourage any nest-building the way a friend does.

I'm sure these posts probably will only be of interest to dedicated robin-watchers like... maybe the local feral cat, however this time I'd like to make a better effort at documenting the structural underpinning to the nest. What will be really interesting is to see what differences there will be between this new nest and the first one.

7:30 a.m., 29 May 2014, early birds, worms and all that. She's definitely been using bits of the dried grass fill from the last nest that I left for her on the ground by the deck.

12:30 p.m., 29 May 2014, I'd caught her sitting on the nest a few times through the morning, guess she's packing the twigs and dried grasses down and checking for stability:

2:59 p.m., 29 May 2014, looks like she's finished for the day. Luckily, we still have some swampy low ground over by the fence so there's no shortage of mud to build with.

I also just about stepped on a bunny today, quite a bit smaller than the one I saw last week. He wasn't quite as enthralled to see me and scooted under the deck. Definitely a warren under there.

I actually AM working on jewellery these days, but in between typing and procrastinating... lots of procrastinating. I sold several seed bead bracelets and necklaces the past few weeks at the market and several people have been looking at the anklets left over from last summer. I got some crazy seed bead colours at Waaaaal-Mart Tuesday night, and then went back for more colours yesterday. 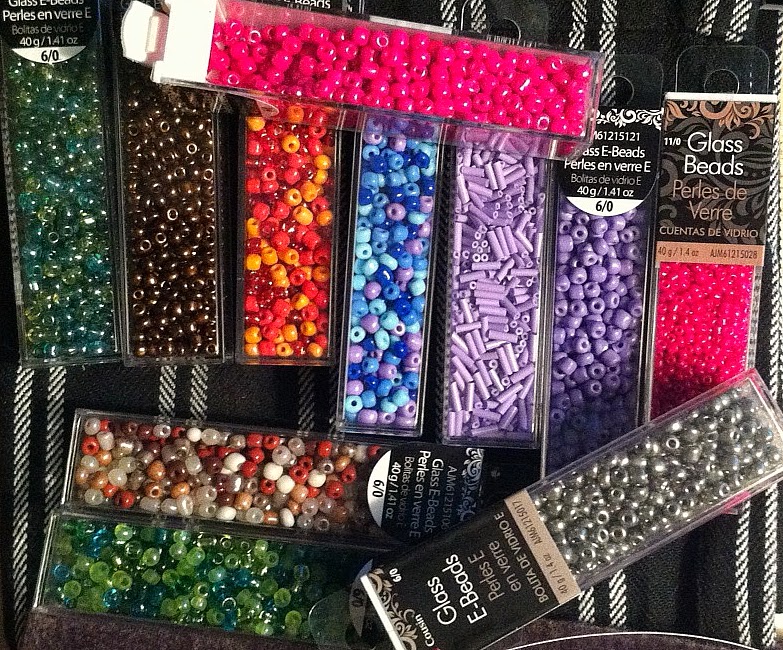 Those ones that look like chocolate brown are actually a deep bronzy copper and the silvery ones are a deep steel grey, both with a slight matte lustre to them. Very, very useful colours/tones/textures, all in one bead, these metallic beads. Great for guys' jewellery... But maybe not the fuschia... the fuschia beads are that solid deeeeep fuschia, like some of the geraniums you see now (of which I've been buying plenty from the flower vendors).

Technically these are poor quality, being all kinds of lumpy sizes and shapes and are mostly NOT 6/0s like the label says, but their lumpy imperfections and semi-matte finish fit right in with the handmade/primitive tribal/ethnic look I'm after. I also took a closer look at what's in the clothing department in order to come up with some more-likely-to-sell colour combos.