My Heart is Pounding...

What happened? I booked my hotel for The Gem Expo in November. Yeah, I know, I know, I don't get out much. THREEEEEE nights!!!!!!!!!! Be still, oh beating heart.

The Strathcona on York Street. I get the cheapest room possible, and it's verrrrry small, but I'm only sleeping there, right? Next to the elevator shaft, still, it's quiet enough. I think it used to be a utility/housekeeping room. In fact, the room is smaller than the freight elevator at the Hyatt Regency where the show is. But who cares, right? It's super cheap for right downtown, and you can't beat the location: across the street from the Royal York and the train station, a mere six or seven block walk from the Hyatt, and their pub grub is super-good and not so terribly expensive with an open kitchen just as you hit the bottom of the stairs. To me, open kitchens rule. I was talking about the Strath Pub a while back with my sister the Toronto health inspector and she was saying that all the pubs in Toronto have had to really up the quality of their food in order to keep patrons coming. All the meals I had there in July were just great -- and the Alexander Keith's on tap was icy cold. That's all I care about -- good food and cold beer.

Just got some typing in, so I gotta get at that shortly. I was making chain jewellery all last night (I'd used up all my Internet bandwidth for the month, but had finished watching Dexter anyway) and this morning, finally finished one long necklace off. I was in the midst of stringing another necklace with handmade zinc and hammered tinned copper dangles when the typing arrived. I'll post the finished jewellery later tonight, but here's a sneak peek. The preponderance of pink is only because someone wants a pink seed bead bracelet with a hot pink enamel breast cancer ribbon charm, so I figured I'd make a bunch of chains with different pinks to see what they'll look like, one thing leading to another, and this long two-strand necklace was the result. Plus there was this long neglected but lovely string of blue chalcedony from Nelson Gemstones that has been popping up for at least a year whenever I reach for something -- pick me! pick me! -- so I finally broke the string up and committed myself. 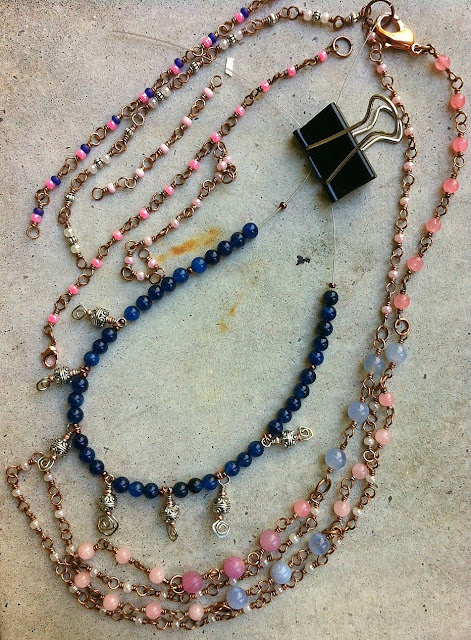 There's a part of me that wouldn't mind moving back to Toronto -- the 6 a.m. to 2:30 pm part of me, if that makes any sense. But once rush hour hits, not to mention the much cheaper rents, I'm just as happy to be living out here in the sticks... for now, at any rate. But man, oh, man, it's nice to be there during the show, at least until I have to get into my truck to go anywhere and taking 20 minutes to drive five blocks...

BTW, does anyone recognise this little guy? He and his zillions of brothers and sisters are just over an inch long, extremely fuzzy and considerably whiter than this one looks in the picture and motors around quite quickly. No idea what he'll become in the spring. I don't remember seeing quite as many of these other years. 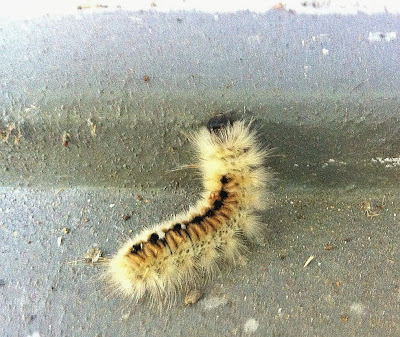 Thanks for looking!
Posted by Barbara at 15:39