A night with zero sleep. Many things were worrying me, not the least of which was wondering if we'd have a good turnout because this show was at the end of March Break and many of our customers in previous years (when the show coincided with the first weekend of March Break) had let us know in advance that, so sorry, going away the whole week; catch you at the summer show.

Friday morning, 7:30-8:23 a.m.
Got out of the hotel by 6:30 a.m., hit Tim's on the way (should've gotten a large latte, or even two, but kinda forgot). I was at my table by 7:30 and dove in. First thing was to change the angle of the shelf on the outside corner of the booth and straighten the cloth so they were more or less aligned: 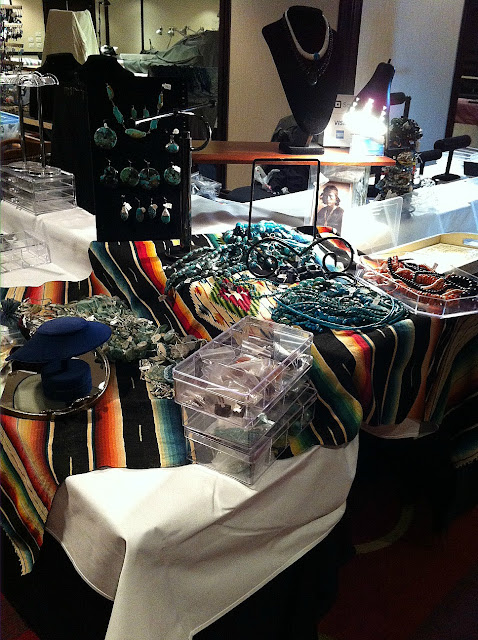 Bead bins are laid out and aligned. I have to play with them quite a bit to sort out this two level business. 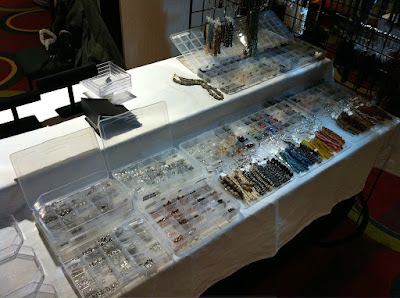 ...but by 8:30, they're in a configuration I like, some with lids up and others turned backwards with lids facing down/out towards the edge of the table so I can put out the glass beads in a rainbow. I should note here that two price tags are on the inside of each compartment so they can be viewed easily from either side.


Friday morning, 8:46 a.m.
The entire loose bead table is pretty much done. I've decided that miscellaneous necklaces and all my bracelets will go along the top shelf. Very soon, the bin of large shell and Mongolian Jet rondelles in the middle there will go on the other (fetish) table. 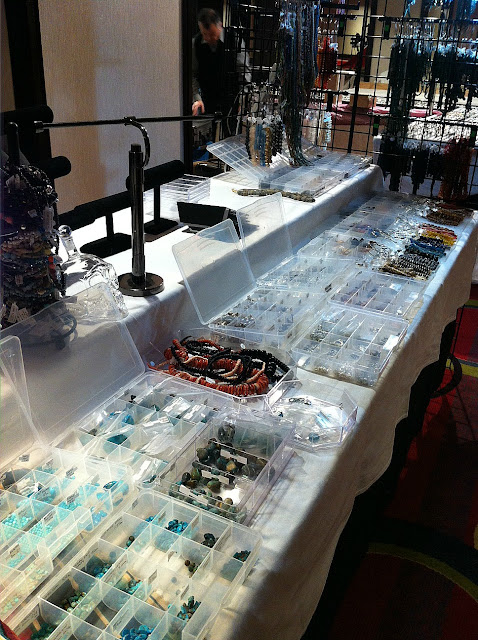 The turquoise corner is pretty much done, as well, although both trays ended up trading places with other smaller bins and trays. Note to self: All these trays, bins, boxes and T-bars WILL be pre-loaded and covered in Saran wrap before I leave for the next show. 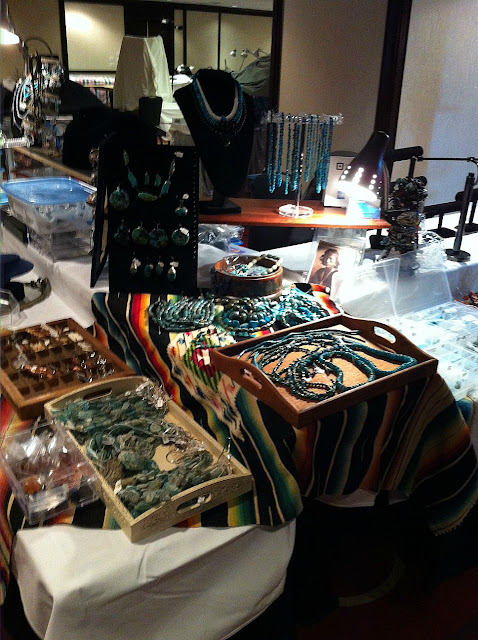 Friday morning, 10:00 a.m.
I found extra room on the fetish table and moved items that fit better thematically from the bead bin table to here.

I have lots of small items that I pin to stretch velour-covered boards. At the Grand River Bead Society show in Kitchener last fall I saw people who'd put kits or necklace/earring/bracelet sets on cards and stacked them vertically in kitchen pot cover holders. I found an antiqued bronzy metal one at Winners and I have four boards stacked in it to the left there. They were easy to flip through and pull out for interested customers, but stayed out of the way and weren't tippy at all. I knew I should've bought the other one that was there. The other board leaned against the top shelf and blocked some of the view of my junky work space in behind.

You can see here and in the next photo how the trays got shuffled around a bit from the previous photo. 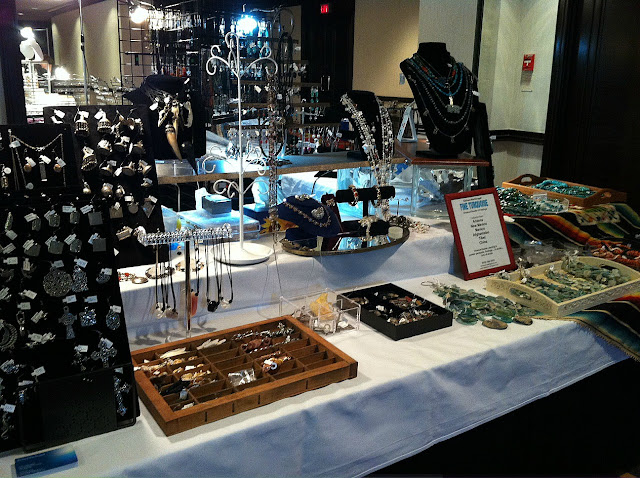 By now, I'm reeeeally in love with this two level setup. I have a ton of very different items and it's so hard to display things logically, especially since so many things blend seamlessly and overlap distinctly -- and very possibly disturbingly: fetishes, skulls, estate sale items, turquoise, Roman glass, pewter, copper, silver... vastly different materials and techniques. It's a walk around the world and through millennia, and I am so in love with weird.

The turquoise corner is pretty much done. But oh, do I ever need tall lighting here. Yikes. 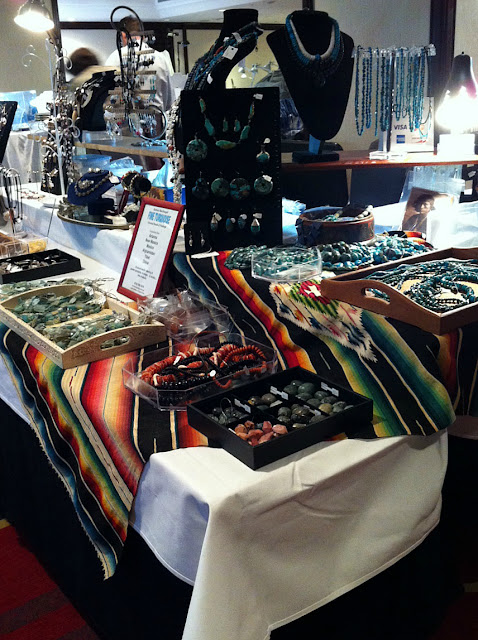 Filled the extra room on the bead bin table with the best of my copper wire necklaces laid flat and the rest on a T-bar. All my smaller turquoise necklaces you can just see on the left up behind the loose turquoise bead bins. 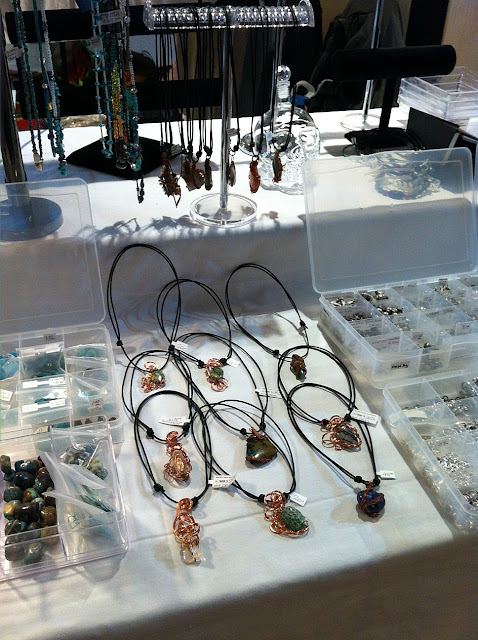 I ended up with a lot of empty space on this side of the booth. The reason I am so concerned is there's nothing to stop anyone's eyes from straying to any of the booths across the ballroom. Not to mention it's wasted real estate. More busts, more lights... all are on the checklist for next time.


Friday morning, 10:18 a.m.
An hour and a bit to showtime. The top shelf is still awfully messy. Need to clean that up and tackle tightening and tweaking the other table. All extra boxes, bins, whatnot at this point will be banished into hiding under the table where I can never find them again for the rest of the show. 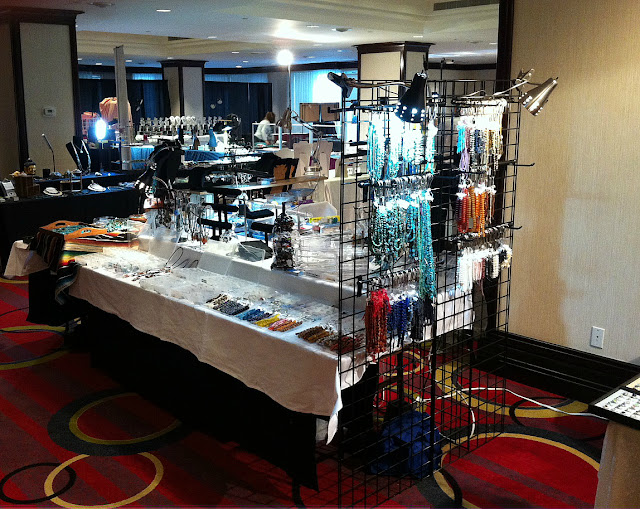 Friday morning, 11:00 a.m.
Well, I'm done. I have half an hour to go visit (aka bug) other people who are trying to finish setting up. 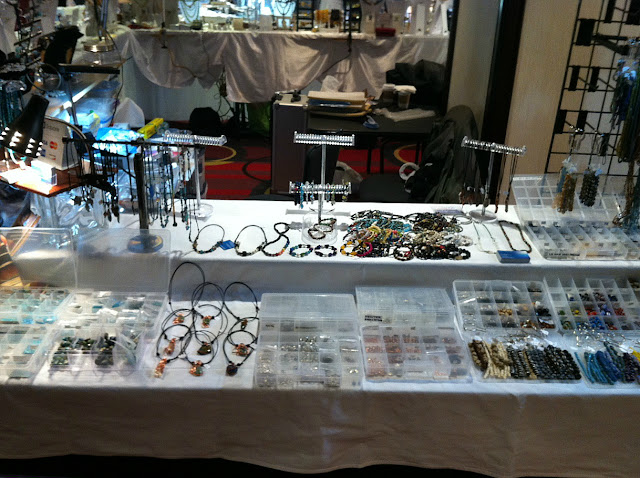 The show opened at 11:30 and went until 8:00. The whole day passed in a blurrrrrrrrrrrr... Wonderful day, could not believe the number of people that showed up and the type of people -- kids, families, university students in particular, so many different people. Every time I ducked out to the lobby there were people lined up to pay their admission. Afterwards, Ruth, two of her friends (my new friends now, yes?) and I went out for dinner at the Thai Princess just to the west of the Hyatt, where we'd gone during the last show in November. Great food and very attentive service.

Oh, yes, I almost forgot: THE BRACELET DONAIR©. Easy-peasy to store and transport bracelets in order, as I prefer to lay them flat and overlapping on the table in a rainbow versus displaying them on a triple T-bar, which I had been doing until I ended up with well over 100 of the little suckers. I either have to sell more, or buy a second holder.

What is the Bracelet Donair©? A paper towel holder. I had originally thought to display bracelets on my market table this way. So easy to see what I have and dig through to the one you want to try on. Phhht. Yeah, right. BUT... for transportation, it can't be beat. Some of you might know a donair as a gyro; some of you might have led sheltered lives. Whatev: tasty, delish and addicting, just like the bracelets.

On to Part 3... The Saturday morning class which I have been dreading since I offered to teach it: The Totally Addicting Stretch Stacker Bracelet for Beginners course. Because who in their right minds would pay 50 bucks to learn to tie a knot, right? Well... stay tuned.