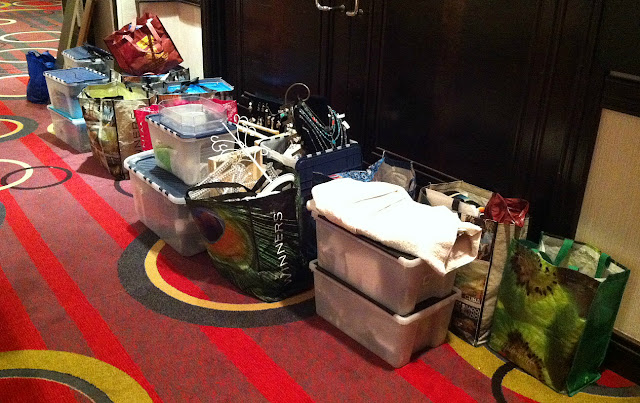 The lights have gone down on another Gem Expo. I started writing this Wednesday (it's late Sunday night now) and as of Wednesday I was still sore and aching in places I didn't know could hurt so freakin' much. Two notable things from this show: Ruth and I puzzled out a new table layout -- which Zulekha assured me I would love (and in the end I did!) -- and I taught a course for the first time.

Because I primarily write these particular posts for people contemplating their first shows, I'll be breaking up this post into several segments as this time I took lots of pictures and came up with several insights and workarounds. A week or so ago I discovered and joined a Facebook group devoted to doing shows. You'll have to ask to join, but it's well worth checking out, because I'm already getting lots of ideas from the participants there to implement for the next show in July.

I'm very grateful for Salim and Zukekha of Blue Sapphire Beads and The Gem Expo who initially asked me to do the shows years ago and now, three years later, kinda sorta pushed me to teach.