Raku sculpture... A blast from the past...

I've been asked by Roses-to-Ashes on deviantArt.com how I came up with this sculpture. This is a 9-pound raku-fired ceramic scupture, an assignment in first year Sculpture at art college.


After my house blew up in Whitehorse in January 1988 (I wasn't in it at the time), I got my old job back with the geologists down in Vancouver and signed up for art school in Vancouver with visions of life drawing and anatomy and Paris garrets dancing in my head, and ended up broke-down, broken-hearted and seeing a shrink. Sigh...

But the good part -- and the value of art school, if anyone is wondering -- is I drew and painted and sculpted and read about art every single flippin' day 24/7 for two whole years, and then went on a 3-month trip to Europe with 48 of my closest friends to do my last 5 or 6, I forget, university credits in Art History and English literature. There I went to every famous and not-so-famous art gallery, museum and ruin you can think of every day for that three months in Rome, Florence, Venice, Lucerne, Zurich, Paris, Amsterdam and London. Now THAT was a hoot. But I will never ever ever go anywhere with 48 people ever again in my life. Holy crap.

But back to the sculpture. I am a confirmed 2D artist. Portraits. Body parts. Monochrome. Pen and ink and conte. Representational to the max. Expressionists rule. Lo and behold, surprise, surprise and whaddaya know, I fell completely and totally in love with ceramics and scuplture. Not with the bullshite and bafflegab that went along with it -- I completely did w/o that! -- but just playing with shape. For sure, it made me a much better drawer... at least I think it did.

The project was "metamorphosis". I'm sure there were all kinds of b&b that went along with it in class, but it's an extremely useful conceptual tool to have in order to come up with ideas. (I also recommend Experimental Drawing to get past blocks, either 2D or 3D.) If you've ever picked out shapes of animals or whatnot in clouds, coffee dregs and/or (foreshadowing here) driftwood, that's metamorphosis. Rorshatz blots come to mind here, as well.

We had to bring in a favourite object/item/shape that we loved. I'm sure the reality is we all grabbed the first thing that caught our eye as we rushed out the door that morning. One guy grabbed a wrench, someone else fished in their pocket and came up with a quarter. I got lucky and happened to be wearing a silver-mounted bone claw or fang pendant that I'd found in a junk shop and turned into an earring. 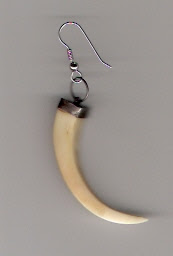 We had to do drawings and render them in perspective... I was a mechanical/engineering draftsman in real life -- before computers, btw -- so I knew perspective inside out. I was verrrrry lucky in that regard. 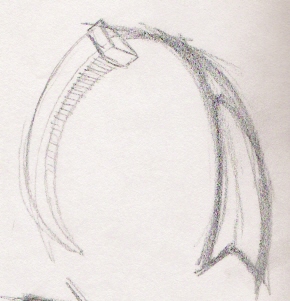 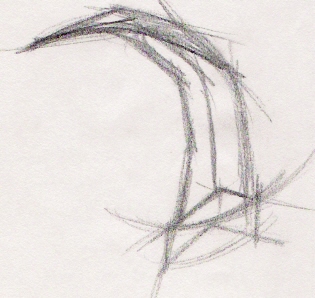 First, I tried building the shape using the slab technique, rolling out clay with a rolling pin and then cutting the pieces into roughly triangular shapes and getting them to stand up long enough to be glued together with slip. That didn't work... at all, particularly given that the sculpture was going to be at least 12" high. I tried coil building and that worked much better. As I was pushing and pulling this roughly triangular colied blob into shape, it started to look (because the clay was grey) like driftwood. I should mention here that I had spent years in BC on the coast as well as in the Yukon by this point and I loved nothing more than looking at driftwood on the beach or at shapes in firekill. It was at this point that I decided to make a driftwoody-type of sculpture. More additive/subtractive, scraping, pushing, pulling the shapes, and the eagle and then the snake just kind of evolved out of the clay. 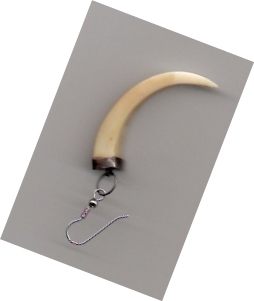 Then came the firing. I'm starting to think now that this project must have been done in the spring term because we were using the outside fire pit and we were all getting pretty good at raku firing. No major disasters like setting ourselves on fire.

This piece took an inordinantly long time to dry in the drying cupboard in order to avoid any cracks. The teachers were either very encouraging or very discouraging. Interestingly, Judith, the course instructor for this class, was the most negative person I'd ever encountered. The "real" sculpture teacher, who I never did get to have as an instructor because of scheduling conflicts and from whom I could have learned a ton of useful stuff, and my ceramics instructor, Don Hutchinson, who I had for two years and who everyone absolutely loved and admired to the skies, both were so very, very encouraging. They were encouraging not in the ridiculous and useless self-esteem way of today, but in telling me how to make this work, that yes, there were huge techical problems to overcome, the first one of course being how thick and thin the walls of clay were and how heavy this sucker was going to be. Drying it extreeeeeemely slowly in a drying cupboard -- and absolutely completely -- was the first trick. Second was for it to survive the bisque firing. Just getting through the bisque firing was nerve-wracking because it was a large kiln, and I had to trust the people loading it -- and unloading it.

Then came the raku firing, which was done in a propane tank-fired open fire pit, with Orwell -- for that had become his name and gender (The Politics of the English Language, by George O. if you must know -- this was art school after all) -- placed on the bottom underneath a messpile of pots and sculptures all dripping glazes every which way, but he emerged miraculously undripped-upon. For those who don't know, raku pots are fired in an open pit with a high flame (don't remember the temperature) until the ceramic is literally transparent. My best pal and I had rehearsed picking him up with tongs together -- he weighs 9 pounds -- out of the fire and walking him over to a prepared smoke pit filled with newspaper and sawdust. And that's what we did.

It worked and you see the result.

Fast forward 20 years, never having touched clay or scuplture again, I discovered PMC, and, drawing on my years with the geologists where I got into learning about rocks and seeing the cosmos in the patterns and colours, I started making jewellery. To me, jewellery is the ultimate in kinetic sculpture. It's about balance and off-balance, positive and negative space become live. Every single person who wears a piece will change it; it becomes something unique via that individual.
Posted by Barbara at 13:20