I think the blinding snow squalls and bitter winds conspired against all of the vendors in terms of overall sales at this November Gem Expo, but I for one sure had a great time meeting so many new and old friends, and four days away from this hated computer was just grand.

As before, my post may be more of interest to people who are starting out doing craft and bead shows -- certainly I'm still learning even now, away shows being a different type of show than the ones where you can drive home at night and the next morning bring the items you forgot the day before ;-) -- everyone else can look at the pictures.

Bidding on The Gem Expo Charity Auction items has been extended until November 30th.
My donation is this partial string of 20 Sleeping Beauty turquoise nuggets. 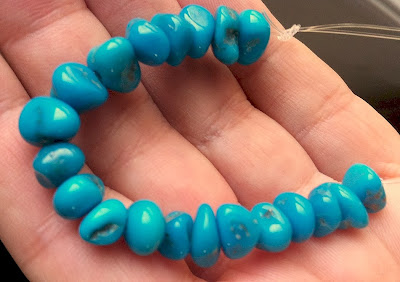 You can bid on this and other items to benefit disaster relief in the Philippines at:


Bring extra table cloths & definitely invest in bed/table risers:
This time, I paid for a corner booth with three tables. Unfortunately, I didn't realise until it was too late that only the artisan tables came with cloths and table skirts, so I ended up having to use a mish-mash of four different colours of cloths to cover my tables to the floor, three of which were originally intended to cover my table at night. It looked reeeeeally junky when I was setting up, but actually worked out fairly well after all the beads and jewellery were laid out on the table.

Setting up the table was made much less difficult because I finally bought some bed risers, used to raise the tables by six inches so people don't break their backs after hours of looking at beads. If nothing else, people will remain a much longer time at your table. I could not believe how low tables really are until the end of the show when I was dismantling my booth and took the risers away. Feels like about knee level.

I also discovered that many people have never even heard of bed risers -- I hadn't until just a few years ago, if for no other reason than I had no need for them. They are sold in sets of four (I paid $7.50 per set for mine) because -- of course -- most bed frames have at least four legs. I suppose many people have never heard of them because beds tend to be higher since people are taller, or it could be that it's because mattresses are thicker than they used to be... or we only need them when our knees become toast. In any event, they are absolutely indispensable and I finally found some after looking for them for a couple of years. Some people use white plastic pipes cut to length, but the problem with those is they don't work if the table legs are completely straight. The pipes are only good with folding table legs have that curve to them.


I loaded up the truck and was on the road to Tronna by 8:30 or 9:00 Thursday morning. I noodled along in the slow lane, found parking immediately at my favourite secret parking spot downtown and went to the wholesaler's where, among other goodies, I scored some Roman glass beads from Afghanistan.

After the wholesaler's, I headed over to Queen Street West, stocked up on plated clasps at Arton, and got myself a slice of potato pizza drizzled with hot sauce and dusted with Parmigiano and a can of Chinotto at Pizzaiolo, my favourite pizza place since Amato's seems to have disappeared from the Queen West scene, and killed time pretending I was still in Italy until I could go park at the Hyatt .

Parked at the Hyatt Regency on King and hiked my bags over to the Strathcona, my home away from home, and ended up with an incredible surprise: since I am now officially a repeat customer, they bumped me up from my cozy converted broom closet (remember last time when I got a room smaller than the freight elevator at the Hyatt??) to a king room. I was beside myself -- literally. I lay on one side of the bed to watch TV but slept waaaaaaaaaaay far over on the other side so I could answer the wake-up phone call Friday morning. I have to say I did miss the shower stall in the Eco room as I have a hard time getting in and out of bathtubs these days. At least this bath came with a grab bar. And I got a desk with an office chair. And a window. Not that I spent much time looking out of it, mostly only to see if it was still raining (no) or if a foot of snow had fallen (no, again). 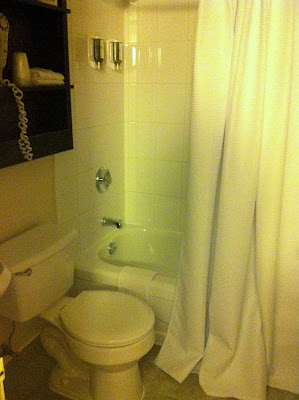 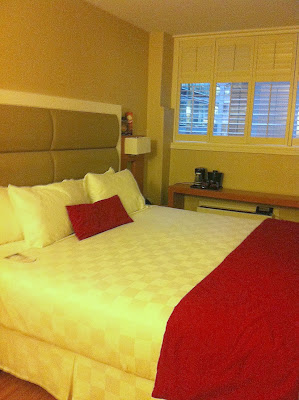 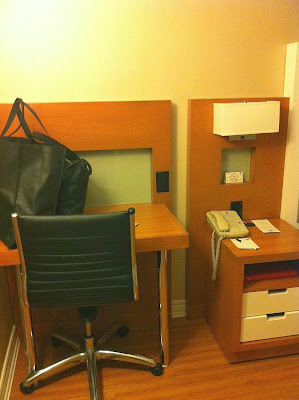 There was a last-minute change and we couldn't start setting up in the Hyatt Regency ballroom until 9 pm, so I met Ruth for dinner after she finished work. The pub at the Strath was full, loud and positively tropical with the exhalations of umpteen hockey fans. Ruth had a craving for French onion soup which sounded like a fine idea to me, and we ended up at Bardi's, a small two-story steakhouse next door to the Strath. Neither of us was particularly hungry but wanted something a little nicer than the ubiquitous Tim's across the street and, since it was an at-home game, we knew every restaurant in the area would be crazy packed and noisy anyway. We had good hot soup, split a Greek salad and an order of cheese and garlic toast, and I splurged and had a glass of Merlot, usually impossible for me in our zero-tolerance province as I tend to end up driving. I would have taken a picture but my phone was charging back at the hotel. Suffice it to say, we spent 2-1/2 hours there and I will definitely go back and try their steaks. Ruth and I spent a lot of time observing and lusting after what other diners had ordered. I have fond memories of Barberian's Steakhouse up on Elm Street from the early '70s and Bardi's is of similar ilk, reputation and vintage.

Rough but methodical setup on Thursday night:
Walked over to the Hyatt and met George who was going to haul stuff up from my truck and help me set up. 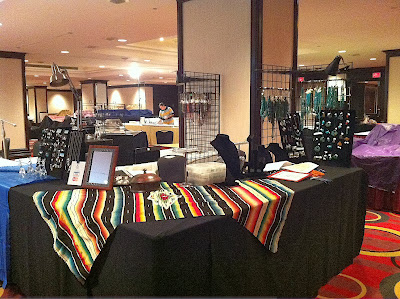 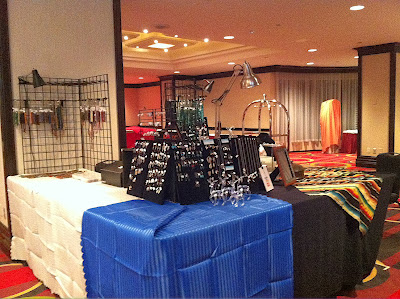 Kinda looks junky with so many colours going on, doesn't it!?

I had done really well at the July show selling earrings and necklaces, so I brought a lot with me this time -- ending up selling one pewter bird necklace and two ropes of pearls -- and they took up a ton of table "real estate". I won't be doing that again.

Saturday morning setting up:
First things first: breakfast. It's absolutely critical to have a good breakfast because once the show opens you won't get a meal break unless you are lucky enough to have someone with you. I don't have a fridge in my room, so it's hard to bring "healthy" foods, although I did bring apples and bananas. This particular show opens on a Friday; with morning set-up starting at 7 a.m. and the show running from 11:30 until 9 p.m. that makes for one looooong day. During the week, Dunn's on King Street about two blocks east of the Hyatt has what I've always considered a classic Toronto breakfast special and miss terribly, although I fear the $1.29 breakfast specials of my youth are long gone. Give me perfect poached eggs and I'm hooked. Unfortunately, Dunn's is closed when I come wandering by on Saturday and Sunday show mornings. But their Friday breakfast is something I now look forward to having, and they have really good coffee.


Something I also discovered this trip is that, at least in Toronto, Tim Horton's now has GREAT cappuccino. (I need to find out if they have cappuccino machines in the local Tim's.) Tastes like the real thing, not to be confused their caffeine-free chemical stew called French Vanilla Cappuccino, AND trust me... it beats anything Starbuck's has on offer all to hello operator. 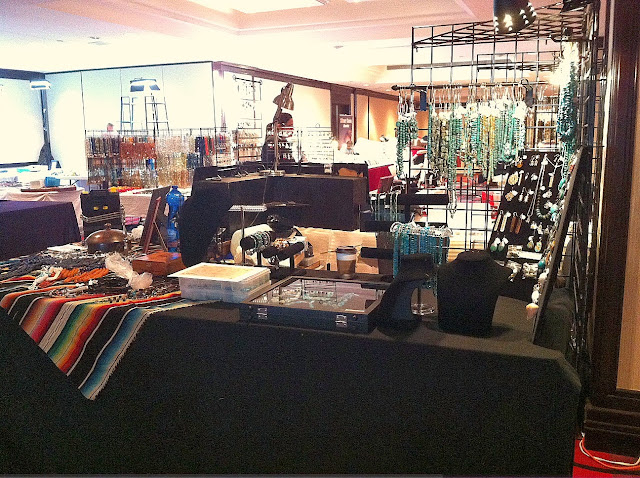 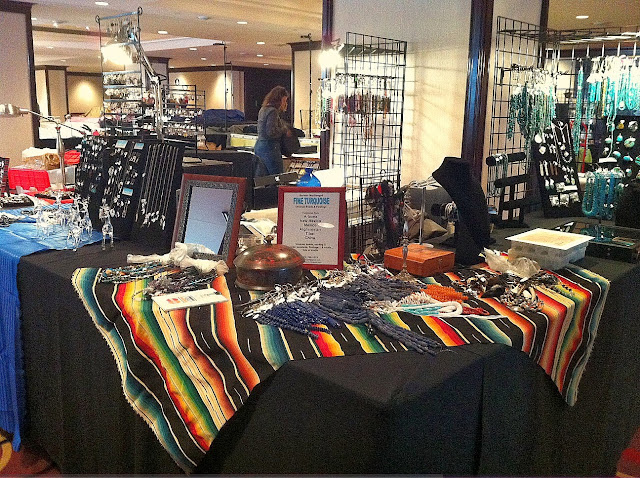 20 Minutes to Showtime:
...shading into high-grade panic. Panic ensues when one is confronted with a new table layout. Plus I discovered I really need at least three more lights, mainly because one of them died on me. More lights go to the top of the shopping list for the next show, as well as bins with lids and a dolly. None of this waiting around for my turn at one of the few the hotel has and none at other venues. 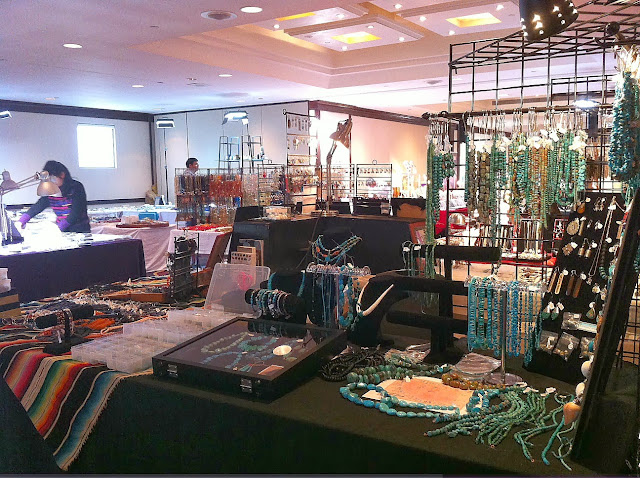 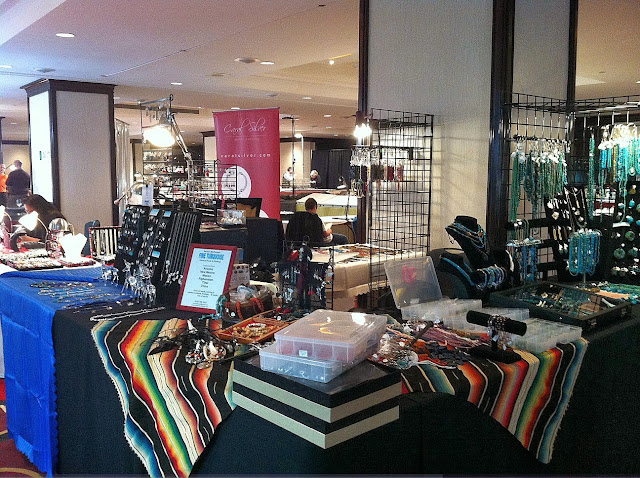 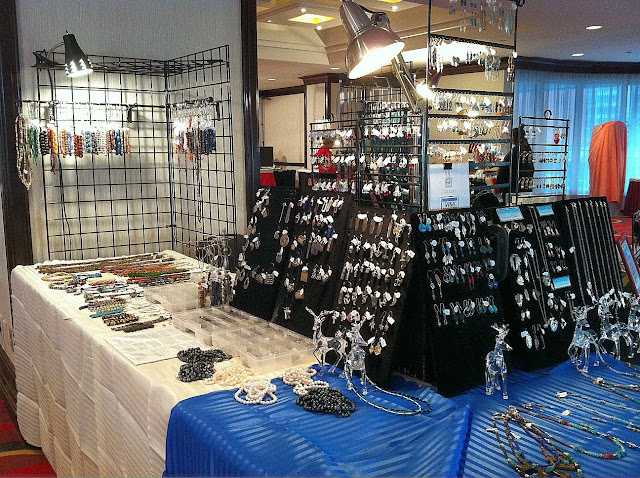 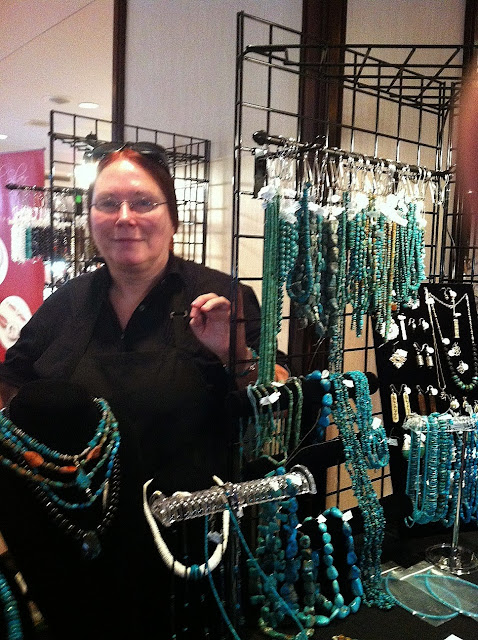 Food, glorious food:
Friday night, I got back to the Strathcona and headed downstairs to the pub. I had wonderfully crispy coconut breaded shrimp with a Thai dipping sauce and a half pint of icy Alexander Keith's, went straight back up to my room and fell asleep. In the morning, stopped in at Tim's two blocks east of the Hyatt and discovered cappuccino -- Tim's has real cappuccino! -- and snagged one of their bacon, cheese and egg on an English muffin sandwich. Ruth brought cappuccinos to me multiple times every day. She also brought me real food on Sunday, her mother's marinated chicken and a side of pomegranates, fruit salad, green salad and some lime and chili peanuts which are really tasty and must be tracked down soon at a local Metro store.

Saturday night, Ruth and I hit the Strath Pub again and split a chicken burger with fries and a massive mountain of tortilla chips. It was so good. And another half pint of Keith's. Alas, Sunday morning arrived way too early, I slept in, had to pack up, check out and got to the show about 20 minutes to opening with no breakfast. I had had to dump my bags in the truck and, with sub-zero interest in going back out into that infernally cold wind and backtracking the two blocks to Tim's for more cappuccino and an egg thing, I had to settle for enhhh hotel coffee and a croissant until Ruth showed up with the aforementioned chicken, salad and peanuts -- and another Tim's.

Beginning to pack up:


Thank you to George and Ruth for all your help, because without you two I have a feeling I'd still be there struggling to get those heavy grids down and into the truck.

Thanks for looking and I hope to see many of you back at the March Gem Expo!

That looks like a LOT of work but a lot of fun, too. Sorry to hear it wasn't jam packed with Christmas buyers. :(

Thanks, Joanne, it is a ton of work, but it gets easier and faster to set up as all the necessary things slowly are recognised, bought and are in the correct bins (which you remember to bring) and you know where everything goes on the table and in which order. The three tables this time came together far faster than two did in the summer. And you can't imagine what fun it is to see only people who are happy to see you and want what you've brought. I love staying in a hotel and getting away like this, going out for dinner and not having to drive hours back and forth. All the experienced vendors are really helpful here with advice, suggestions, praise -- and morale-boosting commiseration when needed -- all of which is a huge benefit. I just wish I'd started doing this years ago.