To "normal" people this wouldn't be a big deal, but to people who bead it's normal to have a table piled high with miscellaneous beads, findings, bins and boxes and no place to work. Instead of making jewellery as I had planned yesterday afternoon I did this instead: 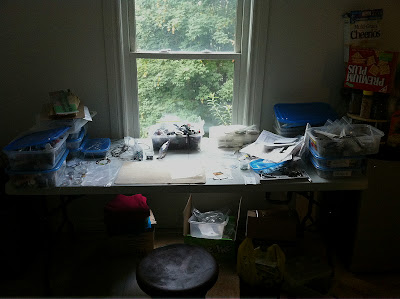 I implemented a two-bin strategy, one for beads and one for metal findings. Essentially, a foot-deep pile of undifferentiated stuff ended up in those two bins in front of the window. Loose beads went into separate bags, one for bead soup, one for metal beads and one for seed beads. Everything else was swept into the garbage, and the whole process took me an hour rather than days or months: rather than wasting time and energy and losing momentum by trying to find a separate place for each of the items, bung 'em in a bin. This is my new mantra. Later... whenever... the beads can get sub-sorted into the appropriate colour bins, and later-later maybe even used.

And then I moved it all over to here -- no, not really. This table and grid, my new dedicated pricing and restringing table for show beads, is the second area that I will tackle today after the market or tomorrow. I have a large industrial shelving unit going almost to the ceiling in the utility room behind this wall which has been perfect for piling bins in, easy to see and access almost all at more or less eye level. 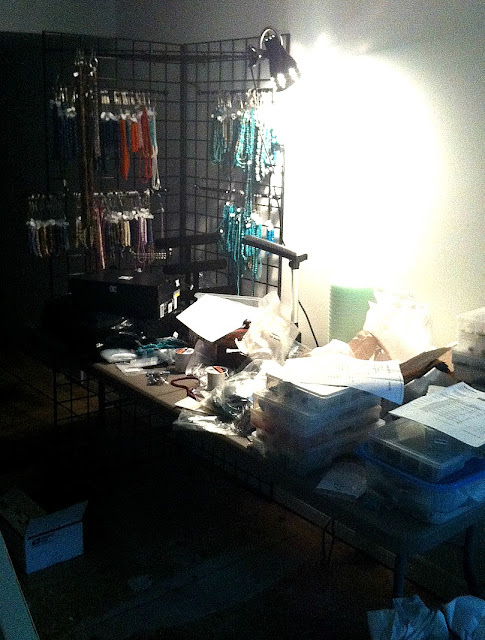 Maybe see some of you at the market today -- yikes, gotta run! Thanks for looking!
Posted by Barbara at 04:06